Merger of Music and Painting

Last Sunday I attended and participated in a combination art exhibit and concert at Peace Lutheran Church in Danville. Adorning three walls of the sanctuary are paintings and text by Christine Hartmann, both of which come from her book I Stand at Your Gate. She wrote and illustrated the book as "a love letter to all men, women, and children who have been bought or sold through human trafficking or exploitation." Dr. Hartman works at Lawrence Livermore Labs. More about Hartman and her work in a later blog entry.

Surrounded by her work was woodwind quintet Mistral (Lisa Maher, flute; Eva Langfeldt, oboe; Christy Diggins, clarinet; Michael Garvey, bassoon; and Jeff Dickey, horn). A mistral is a force of nature, as is an earthquake, one of which had occurred near Napa that morning. With about 80 people in attendance, this wind ensemble played a one-hour set of jazz and dance pieces composed or arranged for woodwind quintet. 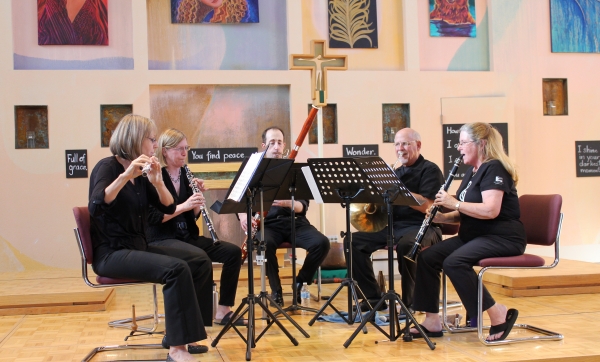 Complementing the jazz theme was a smaller exhibit of music-themed works in the church's gathering hall. Among the artists represented were Bill Carmel, Judy Chamberlin, Mindy Goldman, Richard Merchán, Leroy Parker, and Kathy Wills. These works and Hartmann's "Gate" will be on display at Peace until September 22.

The future of homework
By Monith Ilavarasan | 0 comments | 688 views