I've been watching "The Roosevelts" on PBS and I remembered almost meeting Mrs. Roosevelt many years ago. I thought I might write my blog about it, so I called my mother to see if she remembered what happened.

My mother is one of those very rare people who can remember almost everything in her past history exactly as it happened no matter how long ago. There's a TV show on about that now, "Unforgettable," about a police woman detective who can visually recall everything she's seen. Wikipedia calls this "Hyperthymesia," but also describes it as being a constant stream of memories in the brain and recollections for specific days of the week.

I'm not sure if mother remembers what happened on a specific day or date of a past year, but she can remember a lot of past events in great detail. I told her I was watching the series on the Roosevelts and she immediately described the incident I was calling about before I asked her.

She said, "Do you remember when we were at a concert at Carnegie Hall? You were about 9 years old. We were in the balcony, and Eleanor Roosevelt came in and sat in the Orchestra. I asked you to go downstairs to see if that was her."

I kept trying to tell her I didn't know who Eleanor Roosevelt was at that time, but mother kept on talking, which she tends to do regardless of what I'm trying to say. I did go downstairs and over to the row the woman was in and asked the man next to her "Is that?" and pointed to the lady. She looked very old to me. 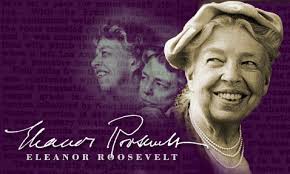 Mother told me to ask if she is Mrs. Roosevelt, but I don't remember if I said her name because I didn't know who she was. The man said "Yes, she is, but she doesn't want to be disturbed now." So I went back up to the balcony where mother was sitting and told her what the man said.

Mother said I was 9 but I thought I was 11 or 12. Leonard Bernstein was conducting the concert and he was young and handsome then. I looked up Bernstein and he conducted the debut of Charles Ives' Symphony #2 at the New York Philharmonic in 1951. I would have been 9 years old in 1951. He did not conduct the New York Philharmonic again until 1957 when he was named the principal conductor. So I guess mother remembers it better than I do.

Lest you think she recalled the incident because she was an adult at the time, she also told me a story about how she walked a mile to Kindergarten in the Bronx when she was 5 years old. She described her difficulty getting around construction work and the cold weather, so she used her nickel milk money to take the bus. That was 93 years ago!

+  Like this comment
Posted by Michael Austin, a resident of Pleasanton Meadows,
on Sep 21, 2014 at 10:15 am
Michael Austin is a registered user.


Roz:
My mother, always the worrier, heard of President Roosevelt death Thursday evening April 12, 1945. She went into labor, I was born Friday April 13, 1945. a few days prior to Roosevelt passing, my mother learned of her young brother being killed in action. She was his legal guardian and had signed papers for him to join the Marines at age 17.


I believe it was Eleanor Roosevelt who said "No one can make you feel inferior without your permission". Her life and works have always inspired me, as I'm sure they have countless millions of others. God Bless America.


Who would have ever thought that this child: Web Link would grow up to be a GREAT FIRST LADY?

I didn't know much about Mrs. Roosevelt so I found all the information/photos about her fascinating. What a wonderful wonderful woman! VIVA!

I think that she should have been the US President!

She practically was President. Because of FDR's physical difficulties, she often made appearances in his name. His and her opponents were very critical of her activities and complained she had too much power for a First Lady.

I was born during President Roosevelt's third term, on October 11, 1942. I was surprised to find that Eleanor was born on October 11, 1884. She was a Libra, and we believe in balance and fairness (I don't believe in Astrological signs, but this one fits.).

According to the series she had a terrible childhood and was always being put down. She needed to develop her own sense of self-worth. That saying makes a lot of sense in that context.

PS I miss the series now that it is over. I wished they lived longer so we could get another episode!

Your mother sounds wonderful! I'd give anything to have a memory like that. I've always been chronologically challenged, I'm afraid. I have a terrible time remembering the order things happened and though I loved History in school, I had an awful time with dates. I have recorded the Roosevelts, but haven't watched it yet.

You will enjoy it. I found it fascinating. I thought I knew a lot about the Roosevelts, but I learned a lot more too.

One thing I knew that the show did not do is differentiate pronouncing their last name. Teddy and Eleanor's side of the family pronounced their name RU-sevelt. FDR and his side pronounced it RO-sevelt. The show used the "O" sound for both sides.


What a great article and thanks for bringing a little local touch to the Ken Burn's series the Roosevelt's. I've been glued to the TV watching this and am amazed at the energy that woman had. Roz, can you imagine having to write 6 columns a week that were being read by millions of people?

She was a larger than life character that didn't have a perfect childhood but didn't let that deter her from giving back and making the world a better place. We could use more Eleanor Roosevelt's in this world today and she will always be an example of what we should all strive to be.

I find it hard to write two columns a week. Yes, Eleanor Roosevelt was an amazing person. She was criticized for overstepping her role as First Lady and doing too much for too many people, especially poor people, women, and people of color.

I like Michelle Obama (better than him), but she could also be doing a lot more for the groups mentioned above. Controlling children's weight isn't as important as making sure poor people have something better to eat than the McDonald's dollar menu.

I left a note Tim's Blog for you re: Livermore demographs - BishopAccountability website.