﻿ Is Catharine Baker against Proposition 2? | The Observer | Roz Rogoff | DanvilleSanRamon.com |

Is Catharine Baker against Proposition 2?

It makes sense to save money when you have it, so you will have it when you need it. That's the premise behind Proposition 2. I support and endorsed Prop. 2. I don't know anyone who opposes it. So why are mailers being sent out saying Catharine Baker opposes Prop. 2 when she doesn't? Ah POLITICS!

When asked about the rainy day fund in an interview in the Livermore Independent on October 10th, Baker said, "I absolutely support it." But she added, "We have to have fiscal discipline, to resist taking on more obligations when there are more funds available." She would place a moratorium on increases in spending until the state is out of debt.

This Wednesday I received an email from Justin Matheson, an advisor to Baker's campaign, asking me and/or Tim Hunt to look into a flier being mailed out by supporters of Tim Sbranti accusing Baker, of opposing the Rainy Day Fund in Prop. 2. 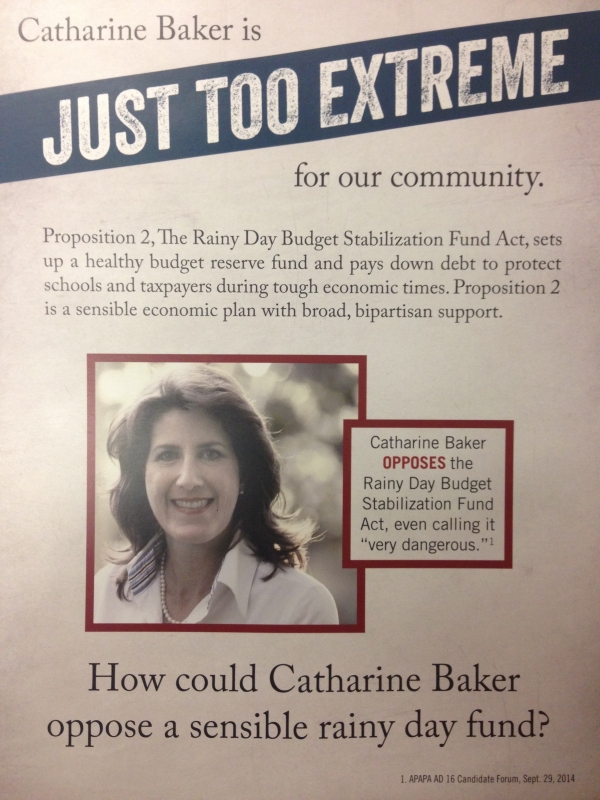 The flier footnotes a debate between Baker and Sbranti held at the San Ramon Community Center on September 29. The Contra Costa Times article on that debate describes Baker as saying, ". . . she strongly opposes putting a cap on most school districts' reserve funds to help the state maintain a rainy day fund . . . " The CC Times article goes on to say, "Sbranti said he supported the idea of a state rainy day fund, although he believes the proposed cap on school districts' reserves is too low and should be raised."

So they both agree that the cap on school district funds is a problem with how the Rainy Day fund is maintained. Sbranti said practically the same thing about it. Isn't it amazing how quotes can be taken out of context to make them appear to mean one thing when they mean the opposite.

A Rainy Day Fund is a sensible idea. San Ramon has had one for years. Of course when you put together a savings account, you need to take some money away from something else to put it away for the rainy day. So that's what the issue is about. Where does this magical rainy day money come from? So far we haven't even had much rain, much less money to store away for that proverbial rainy day.

So where the money comes from, in other words, which budget gets shorted to put some of that money into the rainy day piggy bank, will be determined by whoever is elected next week if Prop. 2 passes as expected. Personally I'd like a fiscal conservative deciding what to cut and what to save. So that's why I'm still endorsing Catharine Baker for State Assembly District 16.


This has been one dirty election! Baker and Sbranti are having a war costing millions of dollars. See for yourself and count how many flyers you have received from either of these candidates, it is outrageous! I am frustrated by the lies both are saying about each other and the continues junk that goes into my mailbox. I have done my research and believe neither of the candidates should be in the state assembly.


So? Who did I vote for? MYSELF! Yep, I did! I wrote my name in the blank spot below Baker and Sbranti. I know I could do a much better job in office than both of the imbeciles together ever could.

Report Objectionable Content
+   2 people like this
Posted by Michael Austin, a resident of Pleasanton Meadows,
on Oct 30, 2014 at 4:20 pm
Michael Austin is a registered user.

You are a coward.
I did the research.
The lies are the Sbranti camp.

Voting for yourself is cowardly non statement.

The lies are coming from both sides but mostly from independent PACs supporting one or the other candidate. That's why these contests are so dirty. Neither Sbranti nor Baker are nasty people. That's the truth.


Here is the video of the debate:
Web Link

Thanks for posting the link to the video of the debate. I searched for a video before writing my blog, but the only matches I got were the newspaper articles. I shall watch the video to see (and hear) what Catharine said about Prop. 2.

My hearing isn't too good and there's a lot of echo in the Community Center Fountain Room. I always have trouble hearing in that room. The City really needs to fix the acoustics in there.

I don't like to censor comments. Michael's comment is critical of your action, but that's his opinion. You explained why you did it, and I don't believe you are a coward.

You took a stand to reject both candidates and wrote in a "protest" vote for yourself. Sometimes there is no "lesser of two evils," and you chose not to be forced into voting for one of them. I see that as courageous.

I just viewed the video you linked with Catharine Baker criticizing the cap on school district funds AND I heard her say (with two hearing aids and my speaker held up to my ear),

"In terms of when other dollars out there are available there has been a change. It's going to be on the ballot in November, and involves something that is very dangerous for our local schools districts and that is an initiative that will put a cap on our local school districts and the reserves that they have and what they can spend it on. There was a backroom deal with the California Teachers' Association that our local School Districts will be limited as to how much they can set aside in savings."

The quoted section above is as close to a transcript of what she said as I could copy, after playing the video five or six time.

I looked at the Comparison chart in the analysis for Proposition 2 on Page 16 of the Voter Information Guide.

Now No Law to require them, but no limit on how much a School District can set aside for itself.

Under Prop. 2 Money would go into a new state reserve for schools and community colleges in years when capital gains revenues are strong. But there is a limit as to how much will be set aside for each School District.


THAT'S what she is talking about and is critical of Proposition 2 for. So what I quoted from the newspaper reports is what I heard Baker and Sbranti saying.

Thanks for that. I love to be supported by THE FACTS.


It couldn't be clearer: Baker said she was against Prop 2 in a debate and it is reported in a media outlet here: Web Link

It probably has to do with Ms. Baker's weathervane and trying to be all things to all people.

You owe it to your readers to post a correction because her opposition to Prop 2 is clear as day.

Did you hear her directly say she opposes Proposition 2? I did not hear Mrs. Baker say that. I heard her say it limited the amount individual School Districts could set aside and that is dangerous. I agree with her, and if she hadn't said that I would not have looked up the exact wording in Proposition 2 to see exactly what it does and what it changes.

Baker is for paying down State debt, which is required under Proposition 2. So what she said is she is opposed to restricting how much School Districts can save but is in favor of paying down State Debt. In other words Proposition 2 sounds good, but there are aspects of it that may not be as good as they sound. Often something that sounds very sensible and benign isn't what it appears to be when you look deeper into it.

The fact that Mrs. Baker looked into all of the effects of Proposition 2 and found some conditions that could be "dangerous" indicates to me that she does her homework and considers all of the possible impacts and not just that a "Rainy Day Fund" sounds like a good thing to have. At least she knows what needs to be fixed, and that's someone I want to represent me in the State Assembly.

And THAT'S THE TRUTH!

Because the blogger on Half-Way-to-Concord labeled Baker as "opposed to Proposition 2," because she's against how a portion of it is designed, "it is reported in a media outlet"?

Hey, I'm a blogger in a media outlet and I say she didn't say it. Richard Eber, the author of the Half-Way-to-Concord blog, added the following comment to his blog yesterday:

"As a point clarification Catharine Baker while opposing the provision in Proposition #2 that restricts the amount of money that school districts can retain on a yearly basis for their rainy day fund, she endorses the proposition as a whole. Baker in the debate objected to the restrictions on the reserves school districts can hold (she says that CTA insisted on including to garner their support) as an example of special interests influence on the political process.

Hopefully this clarifies Baker?s stand on this issue"


I'm sick of all this pettiness. I'm sick of Roz dominating PW Town Square and using her soapbox for her pro-public union opinions, which infiltrate all of the other issues on the ballot.
My opinions are fact based on history and reality. I'm proudly voting for Catharine Baker for Assembly. The S F CHRONICLE and Contra Costa Times BOTh ENDORSED Catharine Baker for the good of our state of CA. IT is dangerous to continue the all Dem SUPER-Majority, meaning the legislature has a veto-proof hold, even the Gov cannot overturn....that is dangerous for any government body, any time!!! Simple language, PUBLIC unions own our legislature, own our state, our schools, our future CA. Unhealthy!! Roz likes that. It's sick and unhealthy!
I'm also voting no on Brown's measure 2....because it is just a handy slush fund to be raided whenever public unions do their next greedy, strike against US.
Those who fail to remember the past, are doomed to repeat it. Is you memory that short on lengthy, painful, expensive strikes. Roz is free with her radical political opinions. But you know what opinions are like....everybody has them. Yours and mine are likely better than hers.


Sabranti was the POLITICAL director of the most hated group in CA...the CTA, the RICHEST, political, Ca Teachers Assoc (UNION)... NOT for our kids!!

Did you bother to read my blog or only the headline? It might help to read it first before posting your silly rant.