﻿ The Golden Days of Television | The Observer | Roz Rogoff | DanvilleSanRamon.com |

The Golden Days of Television

My father bought our first TV in 1949. It was a black and white Magnavox table model with a round 9" screen. It had a blond wood cabinet and cost over $500.

We were not the first house on the block to have a TV. Some neighbors down the street bought a Dumont console TV the year before. I used to go there to watch Howdy Doody and Kukla, Fran, and Ollie.

When I was about 8 years old I was in the Peanut Gallery of the Howdy Doody show. This was the live audience of kids on the side of the stage that Buffalo Bob Smith, Clarabell the Clown, and Howdy Doody performed for along with the TV audience. The photo below is an example of the Peanut Gallery, but it is not the audience I was in. 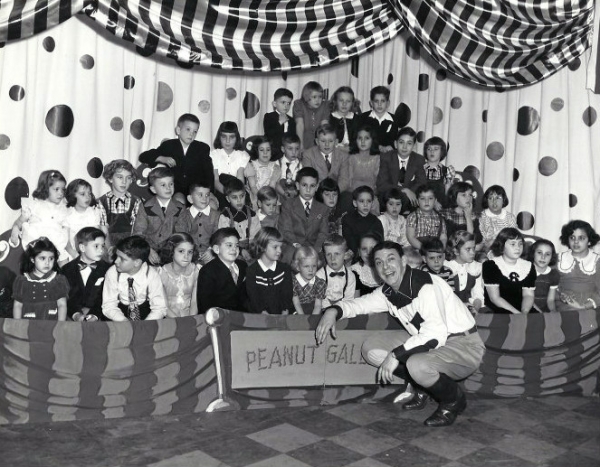 Buffalo Bob lived in New Rochelle when I was growing up. I would see him and his sons around town. His brother Vic owned a shoe store where I used to shop. One of the Clarabells hung out there too, but he wasn't in costume and I didn't know which one he was. Three different actors played Clarabell the Clown on the show from 1947 to 1960.

Buffalo Bob owned a liquor store in the Wykagyl Shopping Center across the street from Vic's Shoes. After I turned 18 I bought my grandmother a bottle of Myer's Dark Rum there. Grandma was prescribed one shot of whisky a day for her heart. It's true. She took it as medicine, and never took more than one shot a day. Myer's Dark Rum was the only hard liquor she used. She lived to be 98 years old.

So why am I on this nostalgia trip to the early days of television? Because two days ago the sound went out on one of my TVs and I needed to find someone to fix it. Years ago TV repairmen were as ubiquitous as plumbers or electricians. Now it is difficult to find a TV repair person or shop.

Since these new flat screen TVs are so light, it's easier to just put it in the back of my car and take it into the shop rather than pay more for a house call. I Googled "TV Repair," and it came up with All Video Repair on Sierra Lane in Dublin. This is near Denica's Restaurant. I never miss a chance to go to Denica's when I'm nearby

I called the number on that website and was told that there's a $75 diagnostic fee plus the additional cost of the repair, which could be another $75 or more. The TV cost under $250; so it isn't worth spending $200 or more to fix it.

Before putting the TV in my car I wanted to see if I could figure out a way to fix it myself. I looked over the buttons and inputs and outputs, unplugged it and plugged it back in again to see if anything I pushed or pulled worked.

Well something did. The sound was back on again. Moving it might have shaken a loose connection back together or it may have been as simple as unplugging it and plugging it back in. I also disconnected and unplugged the U-Verse tuner box, which reprogrammed itself after I plugged it back in. So I saved myself at least $75 for the diagnostic fee and 2,000 calories from Denica's pastries.

That may be why there are so few TV Repairmen left. TVs now are too cheap to make them worth repairing, and the digital circuits could reset themselves by unplugging the set or cable box and plugging it back in again.


Roz: Congratulations on fixing your own TV; unless there are strong burning smells involved, unplug/reboot etc. are usually a good idea.
Here are a couple of other thoughts on "repair or replace":
a. #200 to fix a #250 electronic appliance doesn't make sense but it may be worth it to fix a $600 one.
b. Continuous improvement means that a similarly priced electronic device, compared to one say 2 years old, will have better specs. Such as brighter screen, improved response, resolution or contrast and probably more connectivity.

That TV has a built-in DVD player, which is why it cost so much in the first place. Two other TVs I bought at the same time were under $150 and not worth paying $150 to repair them.

I learned my lesson with these digital devices. The first step is to unplug them. That empties the memory so whatever glitch is in there is erased. That happens all the time with my computers. I also unplugged the tuner box which might have been the real source of the problem.

The TV repair place in Dublin now specializes in Home Theater installations. I can see why.


Thanks, Roz, for the fun memories of Howdy Doody. What a great kiddie show that was. It's cool that you lived 'in the neighborhood' where you could interact with some of the show's personalities.


So let me see if I have this right -- you, a single person living alone, own 3 TVs? Really?? Sounds a little excessive don't you think? How much time can a person sit around watching the dumbed down garbage that passes for entertainment today?

I got rid of my last TV more than 15 years ago and will never replace it. I read, work in the garden, go for walks, anything other than sitting around day and night being entertained by the likes of what is on TV these days.

Thank you for your comment. I don't think three TV's is excessive at all. I like having a TV where I am rather than going to where one is.

The new sets are light and inexpensive, so it is easy to put one in every room. I don't have one in every room, but I have one in my Office where I'm typing this. It isn't on now, but I can watch news, movies, PBS, The Voice, and any other shows that are still worth watching.

I have another one in the Living Room, which I can watch from my recliner chair. I don't watch that one very often since I don't have much reason to be in the Living Room unless I want to watch TV from the recliner. I usually fall asleep instead.

The third one is in the Dining Room/Kitchen, which is the one where the sound went out. I use Closed Captioning because I'm hard of hearing and don't wear my hearing aids, but captioning isn't a good option for The Voice, which is one of my favorite shows.