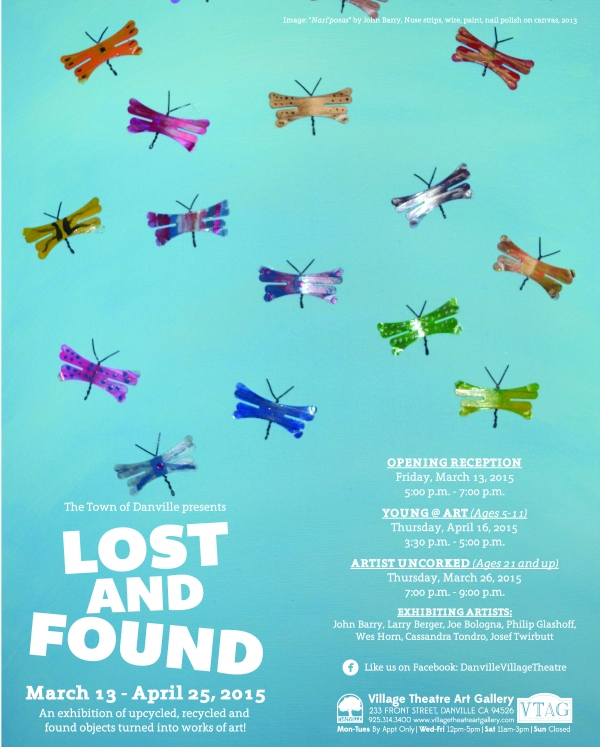 Currently running at Danville's Village Theater Art Gallery is "Lost and Found: an exhibition of upcycled, recycled, and found objects turned into works of art." I have three pieces in the show, having been making "visual puns" out of found objects for years, because I can't draw. Other exhibitors are Larry Berger, Joe Bologna, Philip Glashoff, Wes Horn, Cassandra Tondro, and Josef Twirbutt. But I'd never really explored the history of found-object art until now.

According to artspace.com, "The amassment and display of found objects for their aesthetic qualities dates back to at least the 16th century, when the collections of individual enthusiasts were displayed in private 'cabinets of curiosities'" (http://en.wikipedia.org/wiki/Cabinet_of_curiosities). The Germans called these cabinets Wunderkammer. (German Expressionists also gave us The Cabinet of Dr. Caligari [1920, but that's another genre.)

Fast-forward four centuries, when artists started incorporating found objects into sculptural works. Found objects is a literal translation of the French objets trouvés, a term first used in the early twentieth century, possibly by Marcel Duchamp, who coined the term ready-made in 1915. Duchamp was a pioneer in found-object art, shocking the art world with his use of a urinal in the work entitled "Fountain."

Found objects are "objects or products with nonart functions, placed into an art context and made part of an artwork". . . what we might today call "repurposing" or "upcycling." The first recorded use of the latter term was by the German artist Reiner Pilz in 1994, according to Wikipedia.

In 1917 Duchamp submitted "Fountain" to a show mounted by the Society of Independent Artists. It was promptly rejected, but it is now considered a classic in the objet trouvé pantheon. "I was interested in ideas?not merely in visual products," said Duchamp. The mantle was then taken up by the Dadaists, Surrealists, Abstract Expressionists, and Popsters such as Andy Warhol, who famously said, "Art is anything you can get away with." The found-object movement started in Europe, but today found-object art is omnipresent.

Some famous found-object works are here: http://en.wikipedia.org/wiki/List_of_found_objects. You can find hundred of images on Google.

Or you can see several dozen up close at the Village Theater Art Gallery through April 25.

Doing more with the natural spaces we have
By Sherry Listgarten | 8 comments | 3,024 views

The future of homework
By Monith Ilavarasan | 0 comments | 481 views