Uploaded: Aug 5, 2015
Roz Rogoff recently gave me and my colleague Bill Carmel a nice writeup in her blog: http://danvillesanramon.com/blogs/p/2015/08/04/tour-of-the-arts. In her piece, she mentioned my next trAction Painting event. This one will be on the other end of the age spectrum. In the last year, Bill and I, with several associates, have guided four painting events?all oriented toward education/creativity and all involving five-year-olds to teenagers. This time around, all the participants will be older adults, so the activity level is likely to be more subdued. I'll even have a walker for those who want to shy away from bikes, scooters, and skates.

Bill and I are aiming our efforts primarily at children as we refine and develop programs for them, but we believe that anyone can benefit from or enjoy exposure to trAction Painting. The adults in the upcoming event will be able to express themselves on a 5 x 10-foot canvas. I haven't yet selected the palette, but we won't start on a blank white sheet. Unless I'm going for a certain effect, I've largely abandoned white gesso as the substrate. For example, at the summer camp we just completed and the elementary school event before that, we tinted the gesso yellow. At the camp, we wanted primary colors as a base for a round of pastels on top of geometric figures. It was necessary to lay down only red and blue to get the tricolor base.

The primary?so to speak?reason for using tinted gesso is that some trAction paintings let the base show through. If I want to accentuate bike wheel patterns, for example, I don't want every square inch of canvas covered with tracks that eventually become less differentiated. At the same time, I generally don't want white to be the contrasting color element. It's boring. 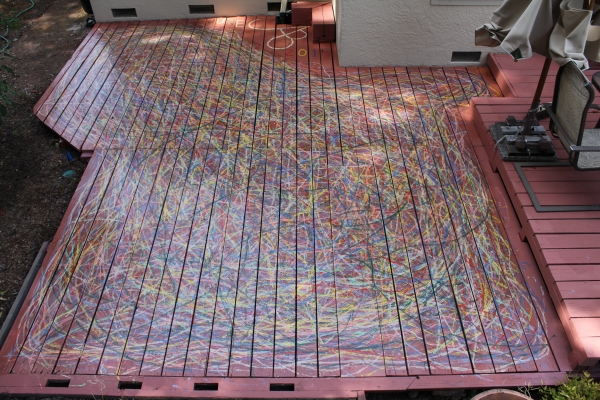 The base was a kind of brick red in the deck painting Roz mentioned. The attached photo shows what it looks like after 14 Razor layers of paint, two of which are the house and trim colors. I was planning to stage the adult painting event on the deck, but the boards are old and some of the gaps between are rather yawning. Concrete garage floor will be much more hospitable to trAction neophytes. I still haven't decided on the primer color for this event, which happens midmonth. I'll document the festivities and be back with a report later.


Thanks for the comment on my blog. I didn't know your event on the 16th is primarily for seniors, but I do plan to come and bring my own walker. It is one of those silver hoop kind with wheels in the front and slides in the back. That should make interesting lines and patterns.

I don't use the walker all the time, but I do use it if I have to walk more than a block or two. My mother has what is called a "rollator" which has 4 wheels and a bench seat. Those are probably better for trAction painting than my hoop style.

You might also try a supermarket cart. Those are very helpful for getting around big box stores like Target or Home Depot even if I don't need it for shopping.

You could set up something at the San Ramon Senior Center. They have a big paved entry and patio. As Cholo would say, "Hooray for seniors."

Report Objectionable Content
Posted by Barbara J, a resident of San Ramon,
on Aug 7, 2015 at 5:45 pm


Well Done John! Love the canvas that Roz has purchased - a real gem with incredible texture and vitality! Love the image of your deck as well! You make a canvas appear anywhere!

Report Objectionable Content
Posted by sasha, a resident of another community,
on Aug 17, 2015 at 12:50 am