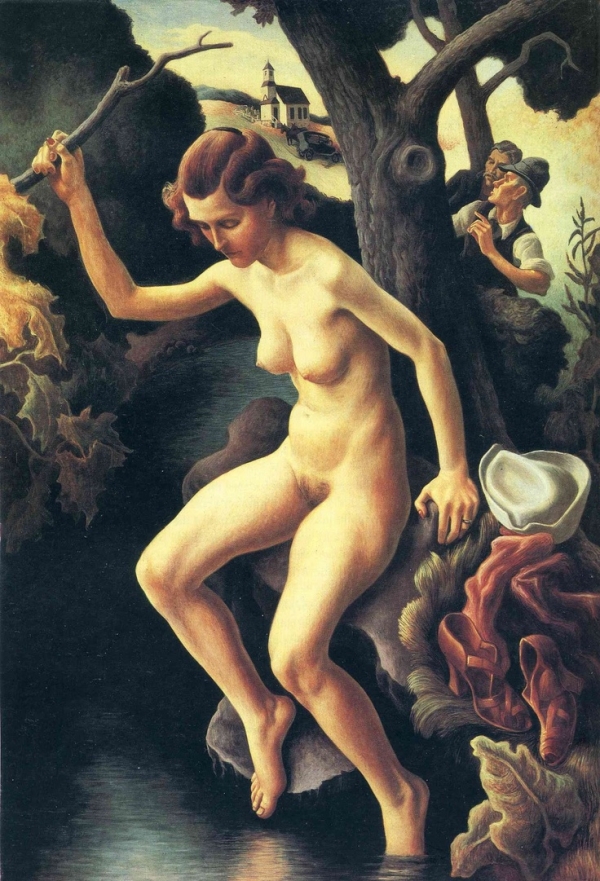 Eugene O'Neill's "Desire Under the Elms"(performances ongoing) and Tennessee Williams' "Streetcar Named Desire" (performances over) are the featured plays during "Season of Desire," at the 14th annual Eugene O'Neill Festival which runs until October 4. O'Neill Foundation and Role Players Ensemble Artistic Director Eric Fraisher Hayes thought the word "Desire" could form the core idea for the Festival and provoke thought and strong emotional content for the Festival events.

I was invited to participate in the "100 Years of Desire" panel at Tao House on Saturday Sept 19. . . a lively discussion of desire as depicted in theater, literature, cinema, and the fine arts." The panel began with this question: "How does desire work in each panelist's creative life?" We all agreed that most emotions behind the creation of works of art begin with desire, and it was clear that an hour would not be enough time to adequately cover a single year of paintings, sculptures, films, books, and performances. So we focused on talking about the creative process and asking questions about the plays in the Festival as they relate to our specific media, to storytelling, and making productions of the plays.

Desire is defined as "wanting to have or to happen." Simply put, wanting the image or the story is the basis for creating it. Want is the basis of most of our emotions—dark and negative ones such as anger and fear, and positive ones such as joy and inspiration. Most of the myths, legends and stories we keep in our libraries, museums and vaults have some form of desire in their content. Desire can result in possession or release.
There is a long record of artists' comments on how the creative process works for them. Filmmaker John Waters, for example, declares, "Good art provokes and inspires." For Waters, "a strong reaction" is an important measure of success. "Not everyone likes the stories I tell," Waters modestly remarks. I agree. So did O'Neill and Williams. As I reflect on the emotions that motivate some of the characters they brought to life on the stage, the familiar territory they explore is both personal and universal

Two examples of universal stories that use visual imagery to communicate the idea of desire are Bernini's marble sculpture "Daphne Pursued by Apollo" and the Paul Bril painting "Pan and Shrinx." They depict the stories in Ovid's Metamorphoses. The nymph Daphne is pursued by Apollo. Just before she is caught, she pleads to her father, Zeus, who transforms her into the Laurel tree. Shrynx is a nymph pursued by Pan. As he sprints to catch her, she implores her father, Laden (the River god) to save her; he turns her into a reed. Pan takes this reed and fashions a pipe that sounds like Shrinx's lament and Pan's desire. In both cases, Cupid pierces the hearts of the gods with his magic arrows; the gods are helpless to control their actions and they mercilessly pursue the objects of their desire. Stories of brutal murders—"Salome and St. John," by Caravaggio, and "Judith with the Head of Holofernes," by Raphael—and of grace—"The Burghers of Calais," by Rodin—are examples of universal and personal extremes of desire.

Thomas Hart Benton's painting "Susanna and the Elders" recasts in contemporary idioms (like O'Neill's and Williams' recasting of ancient stories in modern costumes and sets) an Old Testament story. Susanna, the wife of the wealthy and influential Joakim, inspires lust in two Jewish elders. The elders plot to find her alone and entice her to sleep with them; if she refuses, they threaten to tell everyone that they caught her committing adultery with a younger man. Susanna refuses their advances, the elders accuse her, and she is found guilty and sentenced to death. On the way to her execution, Daniel appears, shouting that she is indeed innocent, and demands a chance to examine the elders. He shows that they are lying by demanding that they name the tree under which they allegedly found Susanna and the young man. Since they are unable to agree, Susanna is exonerated and the two elders are executed in her place. This story appears in Daniel, chapter 13, in Roman Catholic Bibles. Benton paints Susanna naked, under a tree, her toe poised to enter the lake to bathe. In the background, the two elders plot her blackmail seduction. The drama of this painting resembles the drama of the two Desire plays.

The appeal of the O'Neill and Williams plays lies in a similar casting of the characters as victims and perpetrators of feelings and emotions that result in actions that spin out of their control. We see ordinary people play out the circumstances of their lives, filled with intense, misguided emotions and tragic consequences. People try to work things out as best they can but are usually ill-equipped to achieve good outcomes. Most of the time, people are left to accept the outcomes that fate hands to them.

These plays begin with simple needs and circumstances that are complicated and overpowered by wants blown out of proportion. All the characters in the story are attracted by the emotional components of sexual attraction—love triangles and greed being major motivators of actions and reactions. Cupid's mythical arrows shot by the authors require impulsive action by the protagonists who are further twisted by the dark forces around them. False perception appears real to them. In both plays, everyone is left with no way to transform a dark outcome into a positive one for all concerned.

In both Desire plays, the eventual outcome for most of the characters isn't left open or positive. In "Elms," we don't know what happens to the father, Ephraim, and his first two sons Simeon and Peter, but Eben and Abbie are ruined. In "Streetcar," the Stella and Stanley marriage is tenuous at best and Blanche is ruined. There is no implication that any of the characters have been transformed in a positive way. The character flaws and potboiler circumstances leave the characters unable to change enough to overcome their fate, which they accept with resignation.

Many artists have produced and are producing works that advocate for social justice causes and present themes of dissent about status quo corruption. Works by David Hockney, Keith Haring, Andy Warhol, Herman Volz, William Gropper, and many others have social justice themes—as do those of old masters such as Daumier, Hogarth, Goya, Renoir, Rodin, Degas, Michelangelo, and Caravaggio. The old stories are revised and retold – familiarity engenders feelings of understanding, security and the possibility of catharsis. But catharsis doesn't stop the repeated experience of the original trauma in unrelated events. I'm proposing that the symbolic experience of redemption might change an observer's point of view, as catharsis is supposed to.

As I rode the bus rode down from the Tao House, I had the feeling that searching for how to assemble stories of redemption in visual language as a single painting or sculpture is a big challenge—one that I' think I've successfully faced in some of my work, which can be open-ended or specific. (I prefer open-ended, because it leaves meaning to be inferred by viewers, including myself.) Benton and Haring handled the challenge well. Diego Rivera, Jose Orozco and Alfaro Siqueiros were geniuses at it: they believed that art is a viable means for social transformation.

In any event, this discourse about Desire into Tragedy, into Catharsis, into Redemption would be incomplete if I didn't challenge every creative person to look at these things in a new way. I propose an exhibit of artworks, poetry, and literature that tell stories illustrating transformation of desire into redemption. For the other art forms, such performance, opera or plays, I'll investigate suitable venues. Got art like that? Let me know and send info to [email protected]

Couples and Premarital: Parallel Living: What to Do
By Chandrama Anderson | 0 comments | 4,855 views