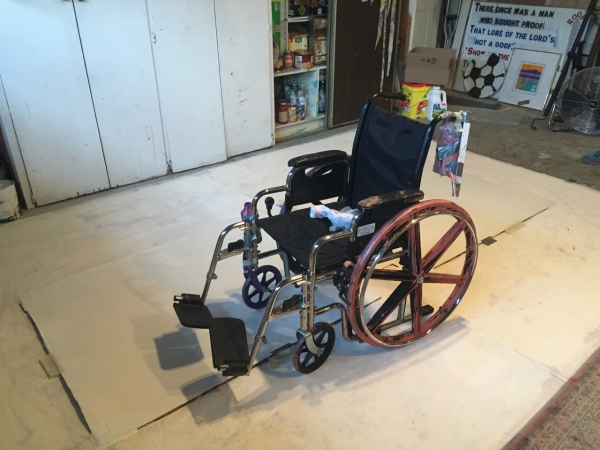 Since I created trAction Painting, students, my associates, and I have employed bikes, skates, scooters, rollers, and other wheel-wielding objects to put paint on surfaces. A couple of times, I used a two-wheel walker, practicing, I joked (I hope I joked!) for the day when my bad back makes such locomotion necessary. “Ought to try a wheelchair,” I mused.

Then, in late January, I was in the mammoth Savers thrift store in Dublin with my son, who was visiting. Savers sells mainly clothes. But in back, crammed in with the miscellaneous sporting goods and furniture, was a wheelchair, complete with footrests and handrails to propel the vehicle. Twenty-five bucks. I bought it.

Its wheels were worn, but otherwise it was in pretty good condition. Brought it home and prepared to try it out. I would need to fabricate paint-delivery mechanisms—but for the test, a couple of quick-and-dirty devices would suffice.

From the left push handle, I hung a plastic bottle into which I inserted a short piece of plastic tubing trained on the left rear wheel. The front wheels swivel, enabling the chair to turn; the bottle I rigged above the front right would drop paint, via a tube, onto that wheel when the chair was traveling directly forward or backward. Anytime the wheel pivoted, paint would plop pointillistically onto canvas. For canvas, I put an unprimed 9 x 12-foot painter’s drop cloth down on my garage floor. Because this was just a proof-of-concept trial, I didn’t bother to prime the canvas. My son assisted me.

I grabbed a can of salmon-colored paint and one of purple, poured some of each into a cup, and thinned it. Salmon went into the rear bottle, purple into the front. And we were ready to roll—literally. I made the first pass and discovered that arm force applied to the handrails could cause wheels to spin in the slippery acrylic medium. With scooters and skates, with their small wheels, slippage is lateral—if you’re not careful, the scooters and skates can go right out from under you. That’s why I generally add sand to the primer to add friction to the canvas surface. My associates and I have organized five events to date with kids, and their safety is paramount.

I forgot to put on vinyl gloves, so getting a grip on the handrails was difficult. Another lesson reinforced.

My son was up next. Then I made a short final run. We let the result dry. Paint penetrated the unprimed canvas, so we ended up with a partial painting on the garage floor. (One day I plan to trAction-paint the whole concrete surface.)

For my second experimental wheelchair painting, the “canvas” was a 3.5 x 9-foot piece of thin corrugated cardboard, which needed to be primed before I could start rolling. I had a gallon of eggshell-finish paint called Porcelain Skin (orange-cream in color) that I wanted to use. With it I mixed some semigloss white and primed the cardboard, which sat atop the drop cloth my son and I had used for the previous project.

I could have employed a more matte finish for the primer. But as I was to discover, it wouldn’t have made any difference. I thought sand would abrade the cardboard’s surface, so I put none in the primer. With cardboard and drop cloth primed, I was once again ready to roll. 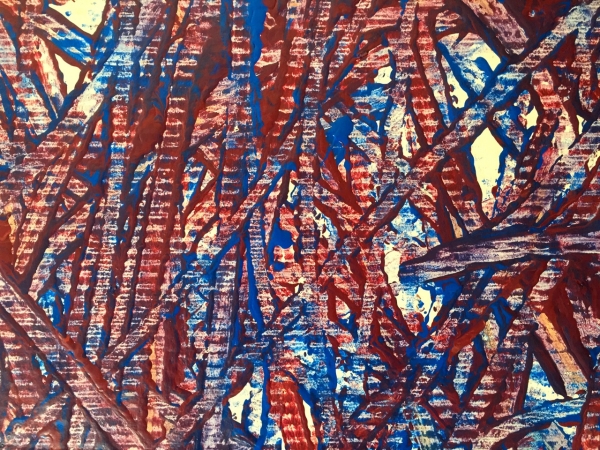 Rolling, I was getting trAction but very little traction…quite literally spinning my wheels after a few passes over the acrylic-slicked cardboard. But despite this viscous situation, I was able to cover nearly all the cardboard in one approximately five-minute session. Spinning wheels put extra pressure on the corrugated cardboard, resulting in patterns that resembled tank tracks, segmented metal watchbands, or duo-toned tapeworms. I was anticipating grooves made by wheels in the cardboard’s corrugation, but it was so thin, the wheels didn’t break through. From a fitness standpoint, I got plenty of arm exercise and burned calories in the process.

Needing a name for this type of process art, I chose “Fautisme” (“Wheelchairism,” from fauteuil roulant, wheelchair) as a play on the name “Fauvisme” (https://en.wikipedia.org/wiki/Fauvism). My plan for wheelchair-painting in earnest, on canvas, was to put sand in the gesso. I also planned to put a thin layer of glue on the rear wheels and sprinkle sand onto the glue. A few days later, I did just that and then threw a wheelchair party (detailed in my next blog).

Always enjoy that Traction painting keeps moving in new directions and never static in process or vehicles. Breaking out of the rectangle into a shaped surface in the second image adds a different rhythm. Will look forward to seeing how the wheelchair work advances in your future pieces!

Report Objectionable Content
Posted by Kasia Kessler, a resident of Walnut Creek,
on Mar 2, 2016 at 2:16 pm


Wheelin" on to new horizons! Love the look and enjoyed the shear inspirational way the artist mind works. Have you thought of inviting whellchair bound individuals for a "Fautisme Extravaganza"? Think it would be enjoyable for all and a step into another inspiration.
Keep on Keeping things interesting!

Doing more with the natural spaces we have
By Sherry Listgarten | 8 comments | 3,026 views