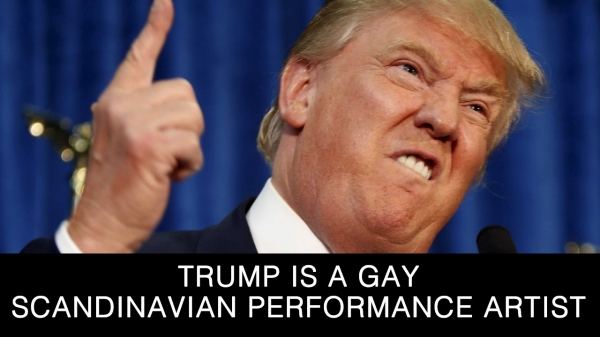 During the endless nearly-two-billion-dollars-down-a-rathole presidential campaign, many pundits and prognosticators opined that Donald Trump didn’t really want to win the election. The ultimate narcissist, he really craved attention for his constant need to be in the spotlight. To continue his reality show bona fides after NBC dumped him because of racist comments. All such pundit opinions seemed plausible, because as a serious candidate he was a joke, a Dadaist prank in action.

But it took MSNBC’s Chris Matthews to really put his long finger on it. Trump’s shtik, he said, was “performance art.” As a performance artist, I’m inclined to agree.

Per khanacademy.org: “Performance art differs from traditional theater in its rejection of a clear narrative, use of random or chance-based structures, and direct appeal to the audience.” Art historian RoseLee Goldberg writes: ‘Historically, performance art has been a medium that challenges and violates borders between disciplines and genders, between private and public, and between everyday life and art, and that follows no rules.’” Much of Goldberg’s definition of the genre sounds like a perfect description of the Trump campaign.

Another aspect of performance art that is even more relevant to the impending Trump regime is the relative lack of importance of the final product. When performance artist Chris Burden is shot in the arm by a friend (https://www.youtube.com/watch?v=26R9KFdt5aY), that’s the piece. The only record of the event is an audio description, a short video, and some still photography. Similarly, when Karen Finley smears herself with chocolate, the performance and its message are the art (https://anotherrighteoustransfer.wordpress.com/tag/karen-finley/). Finley is not going to let the chocolate harden and then frame herself, for example.

Trump is a master of theater of the absurd. During his surreal campaign, the majority of his utterances were completely false and devoid of substance, but the performance was perversely entertaining. The message, if any, is open to interpretation, in part because the statements were so ludicrous. To paraphrase Marshall McLuhan, the performance was the message.

But it backfired. Trump won. So what is he now to do? Either abdicate or continue the performance for four years. If so, the performance is no longer a solo effort. He’ll have to bring the enlarging retinue of sycophants in on the action. Perhaps he can berate Kellyanne Conway in front of Congress while Richard Spencer models SS uniforms. The possibilities seem endless.

Or he might team up with performance artist Anders Lund:

In an alternative universe, he could even be Lund. Anything is possible.

rosalindr is a registered user.

I love your blog this week but for some reason when I click on the link to youtube, I go to ShopMarkCuban.com. If I copy and paste the weblink into my browser, it does go to the Youtube video about Anders Lund. I suppose in an alternate universe Lund could be Mark Cuban or even Donald Trump. Oooeee Oooeee, strange things are happening, but nothing is stranger than Donald Trump being President.


Thanks, Roz. The only way I'd shopmarkcuban would be if it were selling cigars. I've been led to this parasite site before by bad links. Nothing could be stranger than than the narcissist deranger that gets four years/A psychotic tweeter that is likely to create a map of more fears....

Report Objectionable Content
Posted by Cholo, a resident of another community,
on Dec 28, 2016 at 4:01 pm


trump is a pathetic creature...so mean spirited and touchy

he's waaaaaay coo-coo...NOT a performance artist but a deeply disturbed over the top Axis II character

he ain't over till it's over

Report Objectionable Content
Posted by Cholo, a resident of another community,
on Dec 28, 2016 at 4:05 pm


trump is not GAY

what's the purpose of insulting the LBGTQ community


Nice article i liked it

Report Objectionable Content
Posted by Cholo, a resident of another community,
on Jan 8, 2017 at 11:20 am


Is Tom Cushing, Esquire still publishing a column? I haven't read anything news for quite some time? strange...

Doing more with the natural spaces we have
By Sherry Listgarten | 3 comments | 1,659 views