Uploaded: Mar 7, 2017
Well the Yanks hate the Reds
And the Greeks hate the Turks
I really hate to say it
But they're all a bunch of jerks – “Piss on the Wall,” J. Geils Band

Nuclear arms in the Middle East
Israel is attacking the Iraqis
The Syrians are mad at the Lebanese – “The Envoy,” Warren Zevon

A world that is fractured, fragmented. More so all the time. And nowhere more so than on the religious front—or in some cases, a front that passes for religion. But that’s nothing new. Catholics and Protestants once slaughtered each other. And remember the Crusades? Some say they’re still in force. Daesh (a.k.a. Isis) stirs up the “faithful” by claiming that “Crusaders” are attacking Islam. Daesh is composed of Sunnis, who are slaughtering Shiites. And vice versa.

Just some of the deadly fragmentations that persists.

Local Danville and internationally known artist Kevin Davidson often addresses religious themes in his work. One of his religious pieces, “Woven,” was selected for inclusion in a book publication by the Council for World Mission Singapore. This book addresses the tensions between the central ideas of Christianity and the clash of cultures and ideologies found in a global world. The project team includes Rev Dr. Rod Pattenden, an art historian and theologian from Australia, and Sudipta Singh, mission secretary of the Council for World Mission. The book is in the process of being written, and publication is set for early 2018.

Five years ago, Davidson was selected to exhibit his “Christ in Stained Glass” in the exhibit Arte + Fe, held at the Pons Foundation in Madrid on the occasion of World Youth Day. This was the first-ever contemporary Christian art exhibition, showcasing 30 artists from around the world. The piece, one of the highlights of the exhibition, was eventually purchased by an art collector in New York. 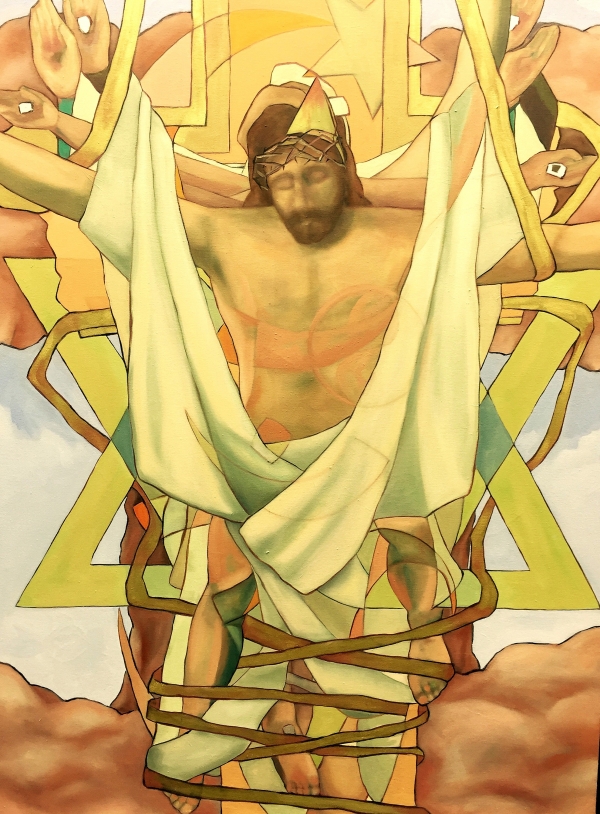 Now, in “Woven,” Davidson expands on some of the ideas expressed in the Zevon and Geils songs above. Zevon’s “The Envoy” is about threats to world peace. In Christianity, the Prince of Peace is God’s envoy to the world. But the world is fractured.

The focal point of “Woven” appears to be the Crucifixion. On closer examination, we see not only the person of Jesus but—in a nod to Duchamp’s “Nude Descending a Staircase”—also multiple crucified limbs showing nails in the hands and feet. Christ’s hands are out of the frame, and his feet are hidden by other objects in the painting, various religious symbols. Are the nailed hands and feet those of the thieves who joined Jesus on Calvary, for example, or do they symbolize all of mankind? Christ appears to be stepping forward, as if leaving the cross, which, for some reason, is not seen. Nor are any symbols of the polytheistic pagan empire that killed him.

Throughout history, though, not everyone has been on board with the Romans’ having been Christ’s executioners. The “Christ killers” were the Jews killing one of their own, according to that notion, a notion that has proven deadly over the centuries and has led to or influenced events from the Diaspora to the Holocaust. Millennia-long persecution of Jews has occurred under and by those with allegiance to the Crucifixion, one of the best-known religious events of all time. Those who follow the crescent have joined in on the persecution, although for different reasons. Davidson alludes to that persecution—still ongoing in some quarters—by showing one prong of the prominent Star of David as if piercing Christ’s head, along with the crown of thorns. The crescent could be viewed as a scythe about to “reap” the figure of Christ. Yet the cross, crescent, and Star of David are three symbols of the fragmented Abrahamic faiths.

A closer examination reveals the yin/yang of Taoism, whose dualistic symbol shows not only fracture but unity.

Although all belief systems may be fragmented—from and sometimes within each other—they are also uneasily bound together. Tying all the images together is what may be a grapevine, a cord of some sort, or maybe a branch from the tree of life. Further, the predominant hue of the painting is yellow, showing Davidson’s belief that—in spite of all the strife—these entities are, always have been, and always will be related and intertwined, even if some of their practitioners are a “bunch of jerks.”

John,
This is a compelling essay. Both images you shared are visually pleasing to me even though the actual depiction is of a historical tortuous scene. Is it possible that art could heal the religious intolerance of these times? What a miracle that would be!
I appreciate your pointing out the details of Davidson's work and giving me the chance to ponder each painting as a tool for peace and healing. I have to smile at your introduction quotes and the last three words of your story.

Report Objectionable Content
Posted by SHAUN TAIT, a resident of Rancho Romero Elementary School,
on May 9, 2017 at 1:01 am


Christ's hands are out of the edge, and his feet are covered up by different questions in the sketch, different religious images. Are the nailed hands and feet those of the cheats who joined Jesus on Calvary, for instance, or do they symbolize all of humankind? Christ has all the earmarks of being venturing forward, as though leaving the cross, which, for reasons unknown, is not seen.Web Link

Doing more with the natural spaces we have
By Sherry Listgarten | 3 comments | 1,663 views