Consumerism is a capital experience. People shop all over the world and purchase items needed to keep body, mind, and spirit alive. The stuff of consumerism is what Lynn Aldrich and Sabina Ott use to make amazing and mysterious art objects. Both artists repurpose mundane consumer items to make their artworks.
The Bedford curators are presenting an exhibit that compares and contrasts the work of two artists who articulate similar ideas from different points of view. The exhibit is a stimulating visual dialogue about ideas concerning consumerism, art process, and humor.

Ott’s work reminds me of wandering in a sparse, inverted forest of pale elongated, suspended shapes. Her sculptures resemble either weathered biomorphic forms or some kind of accreted relics from an urban landfill. With Aldrich’s pieces, I get the feeling of sauntering as a hunter-gatherer through a Home Depot jungle. Aldrich’s work is more diverse, where the idea of the piece dictates the materials and shapes. Her sense of humor is out loud. Ott uses a smaller set of shapes and textures to get at quieter and more personal ideas about our world. 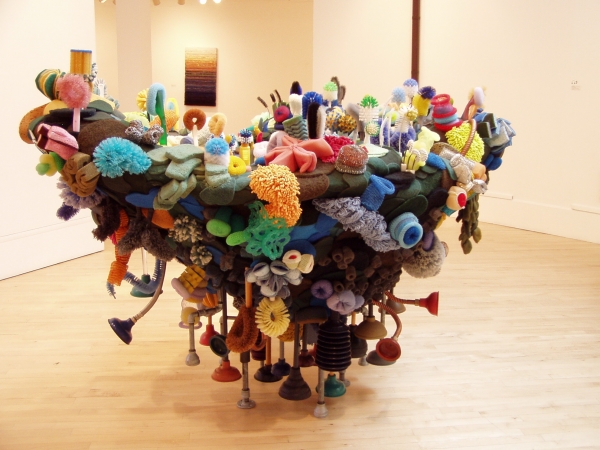 Aldrich is attracted to the colorful and shiny banality of mass-produced utilitarian objects. She finds a new life for these objects in order to make humorous and sometimes ironic visual metaphors about how we use and how we are used by the things we manufacture and consume. A good example is the piece Starting Over: Neo-Atlantis. It is a large jellyfish-like structure completely covered with all kinds of janitorial implements and plumbing fixtures—a hodgepodge of brightly colored and seemingly randomly arranged things. I had several simultaneous thoughts about the generalized outline of the whole form: a jellyfish coated with the trash that covers ocean reefs; a claw-footed bathtub coated with all the stuff that maintains bathrooms; a shape that recalls the mythic island of Atlantis coated with plastic flotsam and jetsam from the ocean; and—as suggested to me by a young woman in the gallery—female anatomy covered with a scullery maid’s occupational tools. 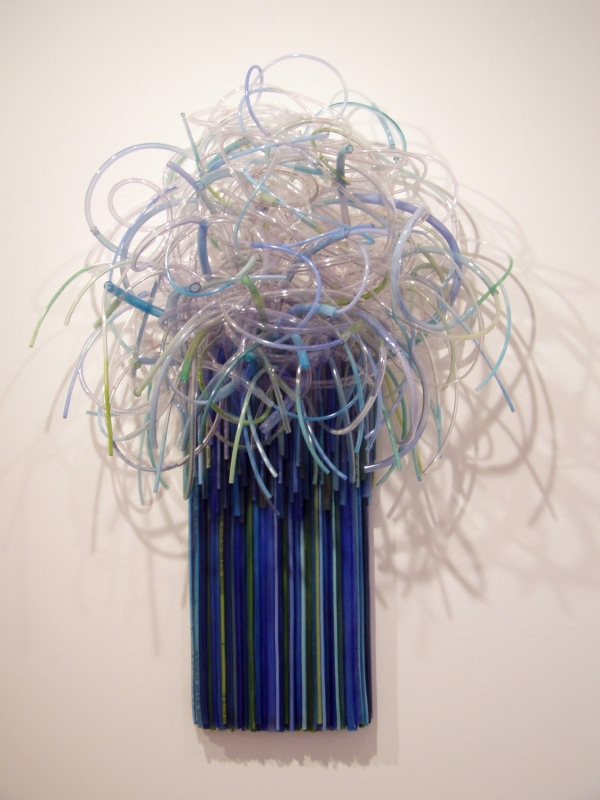 Several other Aldrich pieces offer strong metaphoric references. The wall-mounted Velvet Painting is a stack of colored velvet strips that looks like the sky as it changes from dawn through sunrise. Sudden Storm is a bundle of blue colored vinyl tubes that begins as a straight stalk and then billows out at the top as a haphazard tuft of tubules. It is reminiscent of the natural process in which water evaporates into the atmosphere in an orderly way and then drops back onto the earth’s surface as a chaotic storm. Water Table is a visual joke about how a serene alpine lake might look if its water were lifted out of the earth intact. The hull-shaped stack of white, blue, and green semitransparent corrugated fiberglass panels represents the water. The flat top is just the right height for a picnic on the lake. 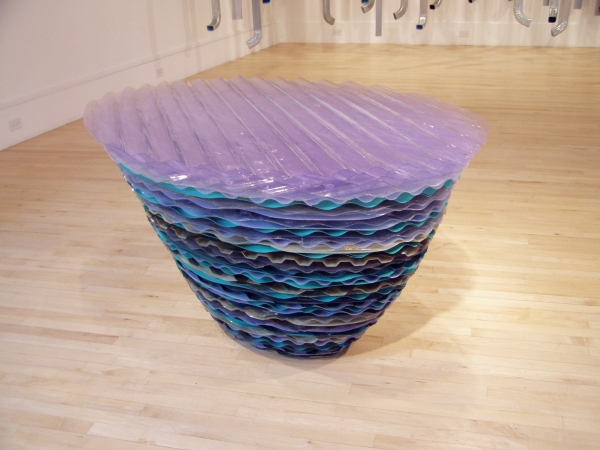 Sabina Ott uses a different set of media and repurposed objects in her work: Styrofoam, mirrors, spray foam, plaster, electric lights, chains, electric clocks, and spray paint. Ott transforms these materials into sculptures that have mostly nonverbal references. She uses these materials over and over, so they form her personal visual vocabulary of shape, form, texture, and color. Many of the textures imitate a surface created by an orderly process but applied randomly.

The use of a randomized assembly process, the montage, is popular with contemporary artists, who cut up and recombine elements, materials, and images so that viewers can integrate an image with a new context. There are just enough of Ott’s sculptures to get a sense of her visual vocabulary and aesthetic sensibilities. 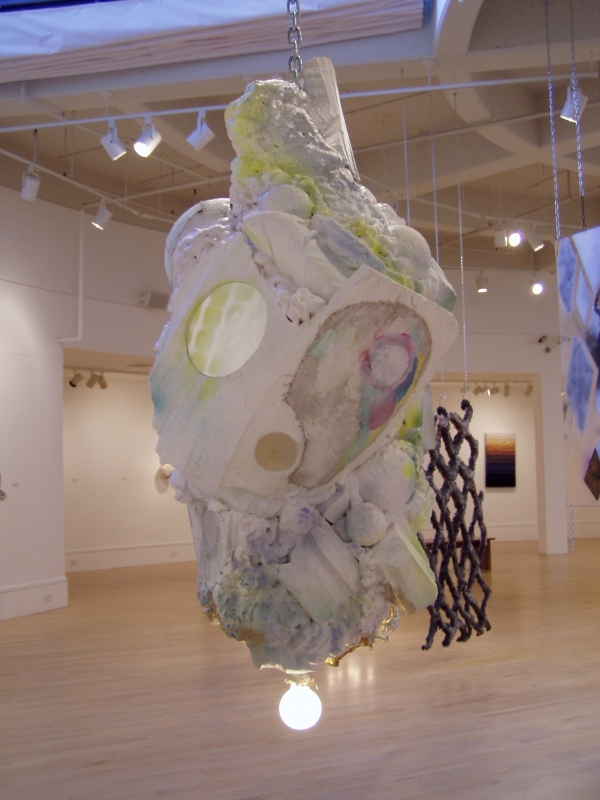 Ott’s piece why is pale white not paler than blue? is one of the hanging sculptures with an organic yet constructed feel. The shape reminds me of a giant pupa, or it may be a nest made by wasps with the help of a magpie or two. Roll a giant snowball over an artist’s studio floor, and it could resemble yellow and green image is a gem in the Lesher lobby. Her large carved Styrofoam sculpture all this which is a system, which has feeling reminds me of glacial ice caves and some of the large sandstone crevasses in the Grand Canyon. The mirrors invite self-reflection and the other objects serve as symbolic fragments.

The words I imagine while walking in Ott’s installation are few; the work is poetic and mysterious. Her patterns, textures, and elements are interesting enough to hold my attention, and sometimes the connections and associations don’t happen until later. Even though Aldrich uses more-direct kinds of verbal and cultural references, there is plenty of magic in her work. Both artists employ basic geometric and biological shapes to great advantage. Simple shapes often allow for more kinds of associations.

With nonrepresentational abstract art, it is possible to appreciate an artist’s process, materials, aesthetic decisions, and personal idioms even though there are few words for guidance. Whether the art is representational or not, the best work is mnemonic: patterns of art marks and images help us understand divergent connections in the world. When we are left with a trail of bread crumbs to follow, the network of visual associations becomes a satisfying experience. Where are Hänsel and Gretel? I invite you to visit the Bedford Gallery to see for yourself where the bread crumbs lead.

The KALA ART INSTITUTE in Berkeley, Ca is offering a Residency with a small stipend to Veteran Artists for 6 months. It provides all facilities to the Artist/Veterans free for 6 months, and participation in a group show.

It's a wonderful opportunity for a veteran artist to be immersed in a wonderfully supportive art environment. PLEASE PASS ON THIS INFORMATION.

Report Objectionable Content
Posted by Cholo, a resident of another community,
on Jul 18, 2017 at 10:16 am

The California Lawyers for the Arts may be of interested to your readers:

It's a good org. and provides workshops for artists.

Report Objectionable Content
Posted by John A. Barry, a DanvilleSanRamon.com blogger,
on Aug 28, 2017 at 8:06 am
John A. Barry is a registered user.

Doing more with the natural spaces we have
By Sherry Listgarten | 6 comments | 2,452 views