﻿ Don’t Get Cute with Me | Art Space | John A. Barry And Bill Carmel | DanvilleSanRamon.com |

Don’t Get Cute with Me

Four definitions of the adjective cute, from dictionary.com.

In the sense of clever, cute is a shortening of acute, from 1731; the informal sense of “pretty” dates from 1834, according to etymonline.com.

However, cute has too often become an overused filler locution, much like awesome, have a nice day, and perfect. I generally cringe when someone refers to a painting, story, joke, etc., of mine as “cute.”

When I first saw the title of the current show at Walnut Creek’s Bedford Gallery, “Sweet and Low: an international show of cute,” my first reaction was to cringe and then take a cut at cute. I walked into the gallery and was inundated by a sea of pastel. But then I read a description of the exhibit:

“Sweet ’n Low features artwork from over 120 local, national, and international artists who extend the genre of cute from cuddly and precious to creepy and ironic. From kitsch and Margaret Keane’s Big Eyes, to Japanese anime and contemporary Pop Art, we’re unleashing the roly-poly, goofily-gamboling, saccharine-honeyed creatures on this earth and beyond! Sweet ’n Low is part invitational and part juried exhibition, juried by Evan Pricco of Juxtapoz magazine and Antler Gallery, Portland, OR.”

Pricco piqued my interest with this: “Cute doesn’t mean cute…starts to mean creepy, unpleasant, nightmarish, or utopian.” From Antler: Cute “can be interpreted differently by everyone—something that is cute to one person might be trite or even terrifying to another.”

I’m in the trite and terrifying camp. So I was happy to see much subversion of cute in the show…starting with the wall of three cringe-worthy “big eyes” paintings by Margaret Keane. This schlockmeister was portrayed by Amy Adams in 2014’s Big Eyes, a biopic about Keane, who created truly creepy images of wan waifs with huge peepers. Next to Keane’s kitsch are takeoffs by Tim Matoma (Scare Bear); Raúl Alan Velazquez (Soul Eater); and pieces by Joon-Hee Park, Cori Bartz, Skye Becker Yamakawa, and Iris Gonzalez. 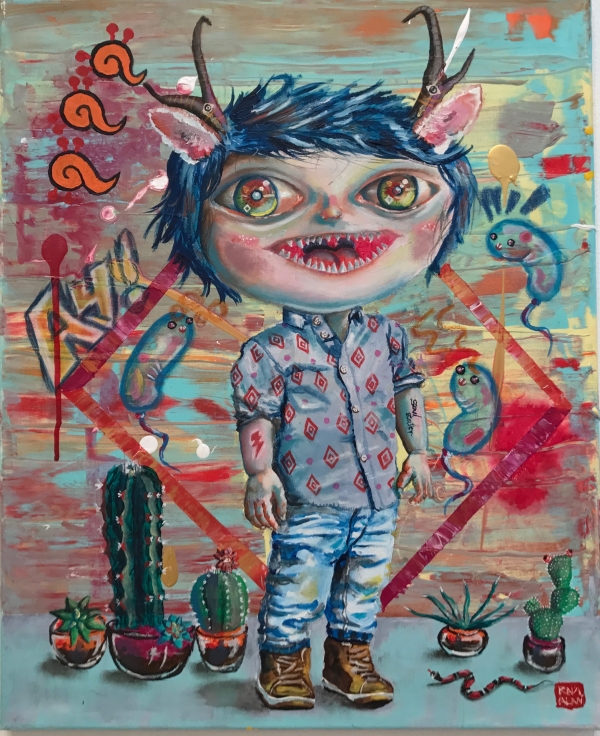 In the gustatory category, along with Soul Eater, are Eat Me, by Fausta Facciponte, a tasty take on Hummelesque kitsch, and Lolly, by Victoria Pittman—also blessed with big eyes. 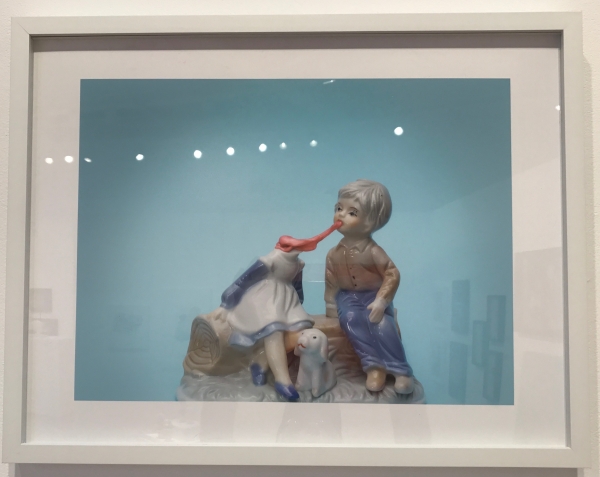 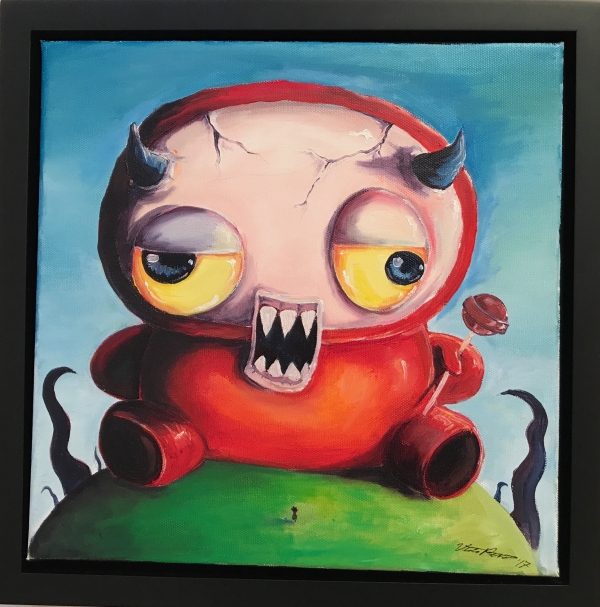 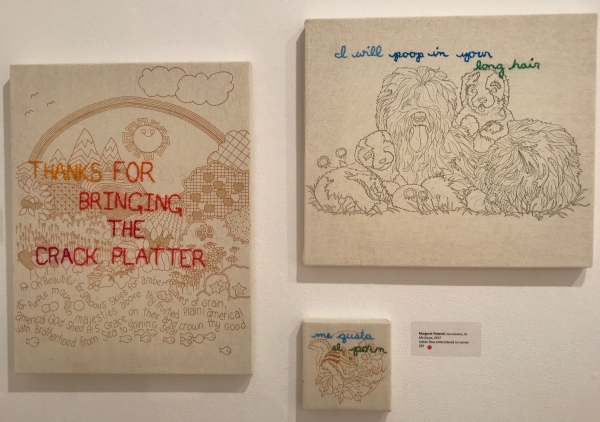 Cuteseyfiti, by Diana Krevsky, incorporates a herd of garish plastic pastel ponies with brightly colored manes. Another pastel pony appears in Monty, Monty, Ride Your Pony…an embroidery featuring a punk in engineer boots, skin-tight jeans held up by a chain from which dangles a cross, and studded gloves. “Monty” sits atop a rearing pink pony with—you guessed it—big eyes.

Pink Teddy, by Mark Nixon, is noteworthy for its satirically maudlin text about repairing his childhood teddy bear. Some examples:

Teddy “even came to college with me, but during this time, the greatest tragedy befell Pink Teddy. The night before Christmas break, there was a huge house party. It was an epic night, but the following morning, I saw something awful…Pink Teddy had been ripped limb from limb. My housemates woke up quickly when they heard me wailing.” Nixon goes on, in mock solemnity, to describe his anguish and explain how he eventually got his precious stuffed friend repaired.

I found the exhibit to be cluttered: too many pieces, some not very compelling. But overall, if you’re as put off by “cute” as I am, you should enjoy the show. Runs until August 27.

My sister coined an alternate pronunciation of cute that sounds like key ought. Thanks for sharing this delightful eye opening exhibit and word meaning piece.

Report Objectionable Content
Posted by Cholo, a resident of another community,
on Jul 26, 2017 at 3:58 pm

Report Objectionable Content
Posted by anony person, a resident of another community,
on Jul 26, 2017 at 4:02 pm

Report Objectionable Content
Posted by Pololo Mololo, a resident of another community,
on Jul 27, 2017 at 10:59 am


John...this is worth seeing and it is FANTASTIC!!!

Report Objectionable Content
Posted by Fausta Facciponte, a resident of another community,
on Aug 4, 2017 at 7:09 pm


So true that the word "cute" is overused. Enjoyed reading the definitions of cute and perhaps this exhibition and the sheer volume of works on display can express the many ways an artist can respond to a theme. Cute has an enduring power and you have highlighted specific works that seem to be uncanny and are full of anxiety. Perhaps it is because you are in the "trite and terrifying camp" - which I find amusing. Thank you John for this review and mentioning my work!!

Doing more with the natural spaces we have
By Sherry Listgarten | 8 comments | 3,477 views