Rodin and Klimt: The Visit

As part of the series of exhibitions that celebrate the Centennial of Auguste Rodin’s death, the curators of the "Klimt and Rodin, An Artistic Encounter" exhibition at the FAMSF Legion of Honor have created another coup. They have assembled 15 original canvases and other works by Klimt that have never before been exhibited in the United States. They compare and contrast them with one of the best in-house collections of Rodin sculptures in the world. Even though Klimt was a painter and Rodin a sculptor, the result is a profound and compelling visual conversation between two artists and their audiences. As in other FAMSF exhibits, comparable works of both artists are exhibited in close proximity to one another.

The pretext for the exhibit is a well-documented meeting of the two artists in 1912 Vienna. Both had achieved varying degrees of fame by that time; Rodin was world-famous and Klimt was renowned in European art circles. Rodin had come to Vienna at the invitation of the Vienna Secession (then in its 14th year), of which Klimt was president, to attend their current exhibit. The two men knew of and admired each other’s work.

I find it uncanny that Klimt and Rodin shared a similar set of artistic circumstances at the beginning of their artistic careers. In fact, they both trained in the architectural decoration arts, Rodin in Paris and Klimt in Vienna 30 years later. After both had completed traditional, conservative academic training, they were rejected numerous times by the art academies of their time: Rodin by the Ecole des Beaux Arts in Paris and Klimt by the Austrian Artists Union in Vienna. Klimt painted interior murals, and Rodin sculpted interior and exterior architectural embellishments. Mastery of these skills would serve them both when it became clear that their work would not be accepted by establishment academic artists. Then they both spent many years collaborating with a few established artists. More will be said about this period of their lives in a later discussion of outsider art. Suffice it to say that they eventually found ways to popularize their visions and overcome the academic stranglehold on public and private commissions. Now the parallels play out in their work. Because they were forced to go their own way, they came up with art that was alive and never got stale, and it kept evolving. The fire lit within them never went out.

The more obvious of first impressions is that both artists revered the human figure. Although it is true that Klimt painted almost exclusively women and Rodin sculpted both sexes, they share a visual vocabulary that is highly expressive. Both render their surfaces with marks that evoke a feeling in the observer that matches what the artists’ personal emotional experiences must have been. There are certain stylistic similarities, such as bold, rhythmic textures that create dynamic surfaces. These dynamic surfaces contrast with facial features that are smooth and crisp. The figures appear to breathe!

The artists also shared a desire to depict real people feeling real emotions. Klimt and Rodin spearheaded this new symbolic representation of realism as a way to express emotions visually and viscerally. Common themes included portraiture, allegory, symbolism, and eroticism. Their use of expressive body language and unconventional composition pushed the standards of content and form beyond the descriptive surfaces and narrative cannons of the academic naturalism in vogue at the time. Literal, rational, and restrained naturalism gave way to sublime, unpredictable, and exuberant naturalism.

Klimt's portrait of Adel Bloch-Bauer compared with Rodin’s Miss Eve Fairfax, La Nature. Both artists go beyond representation into symbolism. For Klimt the juxtaposition of the relatively flat decorated areas that surround the very naturalistically modeled faces, hands, and feet of the human figures is a breakthrough concept. This depiction of realistic imagery that floats in the areas of design enhances the sublime, unconventional quality of the work. What is common in the appearance of these works is the crisp yet soft rendering of detail and form. It also represents a great step forward to pure abstraction. 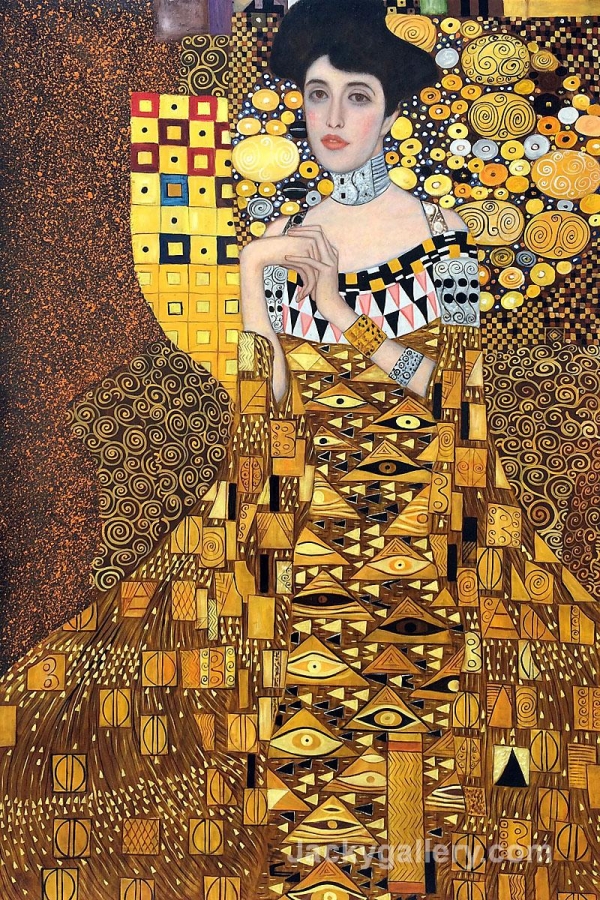 In Rodin’s marble portrait of Miss Eve Fairfax, notice the pattern of leaves that surround the head. They begin as braided hair and finish as a symbolic reference to nature. These patterns resemble the kind of patterning that Klimt uses in Portrait of Adel Bloch-Bauer. 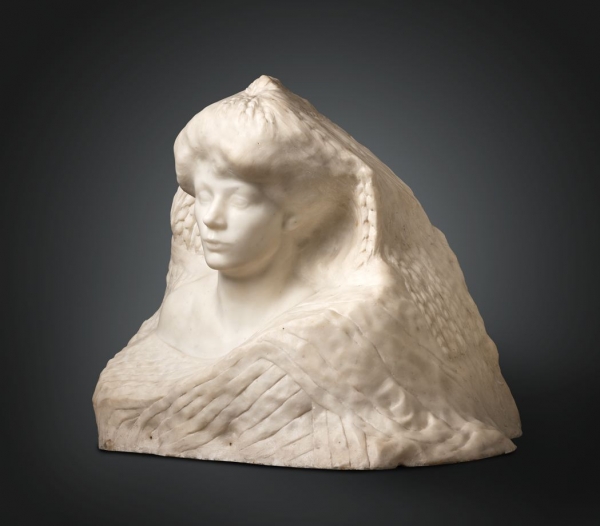 Rodin’s Burghers of Calais, compared with Klimt’s mural Medicine. Both artists use allegory with elements of mythology and history to tell stories. Five hundred fifty years before Rodin created his sculpture, five men ended the siege of Calais with the sacrifice of their lives. Rodin’s sculpture does not rely on accounts of the event. Rather, the gestures and body language of these men tell us of their angst turned inward. We see them contemplate their fate, their imminent death. 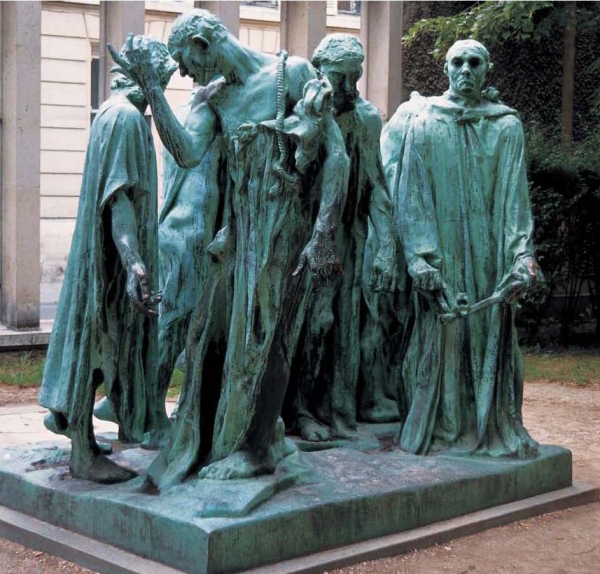 Klimt’s great mural Medicine, painted on the walls of the University of Vienna, was censored by the academic community and soon removed by Klimt. The images of death and suffering and symbols of the medical profession in the midst falling water and falling figures is a different look at life. The pathos that infuses the figures is a sharp contrast to the professional glorification that is normally attributed to medical professionals and their work. The message is clear: death comes to all, no matter the heroic measures. 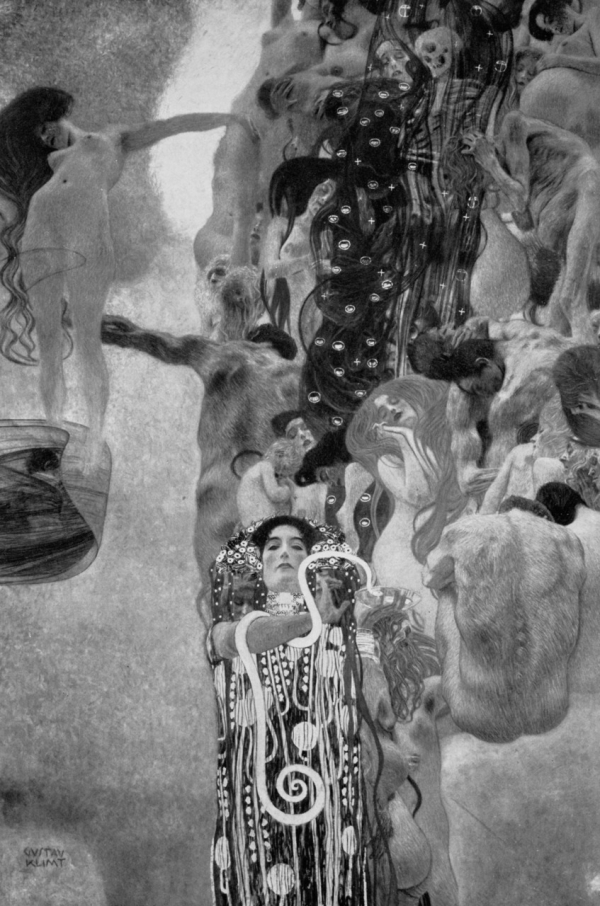 The work of both artists was influenced by artists who came before (Michelangelo for Rodin and Hans Makart for Klimt). In turn, the work of Klimt and Rodin anticipates the future movements of Cubism, Surrealism, and other modern -isms. Modernism, then, is simply an old -ism evolving into something contemporary. The reigning conventions of form and content resist change into something else when other artists, usually younger, renounce those conventions. In the case of artists such as Klimt and Rodin, they revised the prevailing restrained, literal, and pedantic narrative by choosing to investigate gesture, emotion, and allegory. This new Modernism turned attention inward, beneath the surface of beauty. Before they were fathers of Modernism, Klimt and Rodin were Fauvist youths, moving to the beat of a new awareness and liberation that continues. Both artists make us feel the relentless, urgent rhythm of a new world unfolding before our eyes.


At the Fine Art Museums of San Francisco, Legion of Honor
"Klimt & Rodin: An Artistic Encounter," until January 28, 2018

Thank you for this in-depth look at two artists I have always revered. You increase the vocabulary of art for all of us by explaining how each artist infused their work from the inside out with emotion, allegory, unconventional composition, etc. Understanding how their new form of naturalism came into being, which we all take for granted now, really deepens my admiration for the journey these artists undertook.


Bill - a great synopsis of your take of the current exhibition - I look forward to rereading before I visit the Legion soon! Thank-you!

Report Objectionable Content
Posted by Art Lover, a resident of another community,
on Nov 10, 2017 at 9:32 am


Thanks for a great article. I can't wait to go and see the portrait of Adela Bloch Bauer. The story behind the Nazi theft of the painting and the looting of the Bloch Bauer fortune is depressingly sad. Some readers might not know that this painting is also referred to as "The Woman In Gold", the story of which was made into an engrossing film starring Helen Mirren. The fabulous diamond necklace that she is wearing for her portrait was stolen by the Nazi's and there are pictures of Herman Goering's wife wearing it. Dreadful.

Report Objectionable Content
Posted by Matthew_Arty, a resident of Danville,
on Nov 14, 2017 at 5:51 am


Amazing! I love how artists can create such diverse and different from each other masterpieces based on a similar concept. Art is the final form of expressing oneself and one's own feelings. I am not even close to being an artist, but I love admiring the works of art whenever I can... Thank you.

Doing more with the natural spaces we have
By Sherry Listgarten | 6 comments | 2,443 views