SFMOMA is host to an exhibit titled Sublime Seas that features a video installation Vertigo Seas by John Akomfrah; the exhibit runs to September 6. The installation is coupled with the J.M.W. Turner paintingThe Deluge, which Akomfrah cites as an early artistic influence. Both works are sublime masterpieces depicting maritime allegories. The Deluge is a dark drama of death and destruction on a biblical scale, and this theme resonates with Akomfrah. He weaves multiple threads on three giant screens to immerse us in still and moving images of the haunting beauty and horror of the transatlantic slave trade and the migration of refugees over water. These images are juxtaposed with the migration of whales and the whaling industry. In addition, he uses relevant pieces of natural and historical documentaries, personal fictional narrative, and visual and verbal references to the literary works of Herman Melville and Heathcote Williams—along with natural and maritime soundscapes mixed with a score of Tandis Jedhudson—to depict the extreme cruelty and desolation that may follow in the wake of man’s harvests.

Metaphors of water in the natural world and the world of humans resound throughout the piece. We witness several major themes: the water migration of whales, birds and humans; the fragility of life amid the overwhelming power of water as a force of nature; the surreal narratives of human sentinels on cold, desolate beaches strewn with the wreckage of vessels and human remains; landscapes covered in surf, fog, ice, and snow; and the terror that comes from abuse of commerce. Akomfrah compares the pulse of life with the flow of memory, through archival samples of photos, documentary pieces, postcard-like vignettes, and cold northern landscapes. The montage is punctuated by the relentless sound of the wind, the surf, the tick-tock of clocks, and the songs of whales. 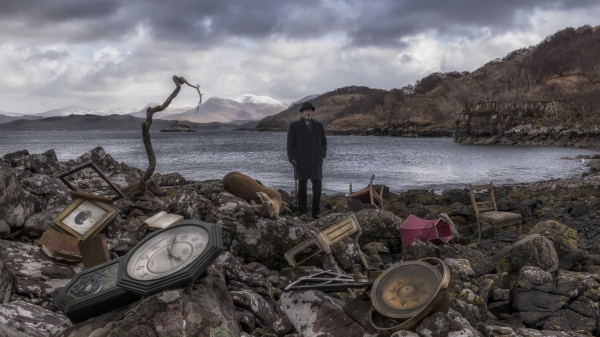 In one scene, a solitary figure clothed in nineteenth-century British attire stands like a sentinel on a rocky beach that is littered with the flotsam of maritime tragedies: bits of broken furniture, bones, a deer carcass, and clocks. In another, a figure watching over a sandy beach peppered with clocks is contrasted with the diving whale peppered with barnacles, as if to say that our sense of time clings to us like barnacles on the skin of a whale. These pieces remind me of Magritte and Dalí paintings. And of course, images of whaling are compared with images of slavery. The commerce of harvesting is found in the “oblique tales of the aquatic sublime.” Isolated humans are put into unsafe holding patterns while they traverse the desolate passages of the world and disembark into strange and arbitrary places. Diasporas fester as open wounds throughout history.

Vertigo Seas is masterful in the way the images, sounds, and spoken words are woven into a dreamlike experience that appears dangerous, beguiling, and poetic. In this sense, Seas is much like the namesake Hitchcock movie, Vertigo, where all the senses become precarious and logic becomes treacherous. Vertigo Seas unfolds as a work that speaks metaphorically of events in our cultural history that are ongoing; it is an allegory that is as large in scope as it is timely.The Deluge tells us about God’s wrath upon man, and Vertigo Seas tells us of man’s wrath upon himself. J.M.W. Turner would be proud.

Thanks, Bill! Your review is wonderful. I really want to see the exhibit as it sounds so interesting and profound.

Report Objectionable Content
Posted by Michel Humper, a resident of Alamo,
on Apr 29, 2018 at 3:14 pm


This is truly amazing, I really enjoyed reading this review. I love going to museums and admiring the history from our past. I can't wait to visit this exhibit!


Report Objectionable Content
Posted by Victoria Jern, a resident of another community,
on Apr 29, 2018 at 3:16 pm

Report Objectionable Content
Posted by Peter Carmel, a resident of another community,
on May 8, 2018 at 2:48 pm


Thanks for the terrific review and description of the museum experience... I like dark and horrific themes. I may in fact get myself to SF to see it.

Report Objectionable Content
Posted by YOLIAT, a resident of Monte Vista High School,
on May 8, 2018 at 8:59 pm

Report Objectionable Content
Posted by Cholo, a resident of another community,
on May 15, 2018 at 3:44 pm

Report Objectionable Content
Posted by Cholo, a resident of another community,
on May 19, 2018 at 11:14 am


Hi...Do you ever write about artists that paint gourds:

Some of the best jobs around
By Sherry Listgarten | 5 comments | 3,406 views

People and Relationships Never Stop Being a Work in Progress
By Chandrama Anderson | 3 comments | 1,913 views

Wine about it
By Monith Ilavarasan | 0 comments | 492 views

What Is a Good College?
By Elizabeth LaScala | 0 comments | 374 views