﻿ A tough challenge on this day of thanks | Tim Talk | Tim Hunt | DanvilleSanRamon.com |

A tough challenge on this day of thanks

Uploaded: Nov 22, 2018
Pleasanton businessman Roy Goble delivered a tough challenge to people attending the sixth annual Tri-Valley Prayer Breakfast to benefit CityServe of the Tri-Valley.
He drew on his book,” Junkyard Wisdom: Resisting the Whisper of Wealth in a World of Broken Parts,” that he published a couple of years ago. The title comes from his youth when his father owned junkyards in Santa Clara County and he spent his weekends and summers working there.
He suggested that our wealth, particularly in upscale areas such as the Tri-Valley, allows us to build walls and isolate ourselves from our neighbors. 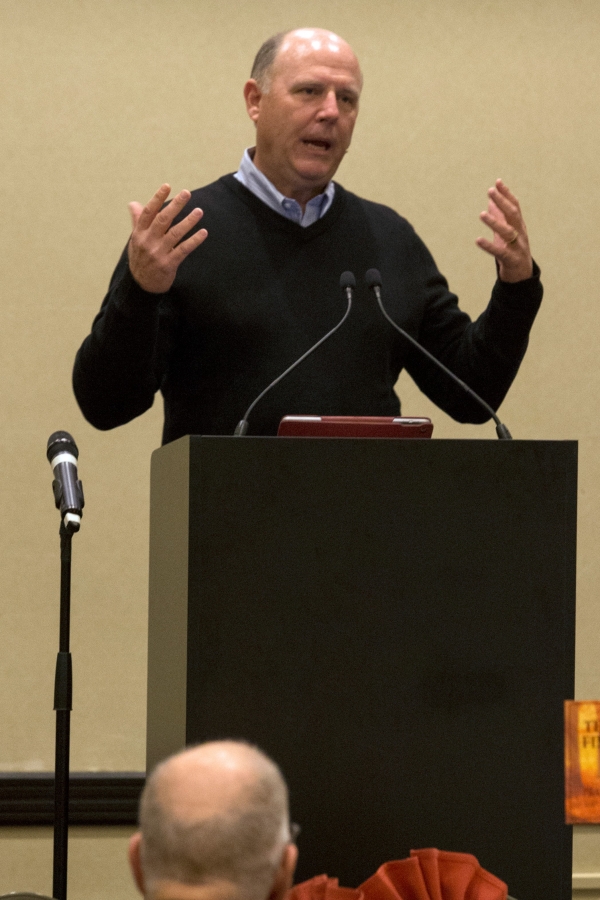 Roy contrasted that with Jesus who constantly was breaking down walls. His message is that we need to follow Jesus’ model and embrace and connect with neighbors who are different than we are.
He described a trip to Haiti to explore ways to help the poor more effectively. The team finished its work early and he had a morning to check out downtown Port au Prince. He was walking along a sidewalk in front of Haiti’s presidential residence with its iron fence and bounded by a busy street. Lying on the sidewalk in front of him was a man begging—his feet were so crippled, they were stumps.
Goble described walking up to the man and reaching into his pocket for some coins. As the man sat up, his t-shirt pierced Roy’s heart. It read “shop until you drop.” He shared that he is not proud of his decision to leave his status quo intact instead of truly engaging with the man.
He told the story in the context of the Good Samaritan story from the Bible.
For Christians living in this area, he challenged us to humble ourselves and truly move towards being a slave (servant) to all. Yes, fear and pride will be obstacles. He recommended replacing pride with humility and fear with faith and then get to know our neighbors who are different.
Incidentally, Roy grew up in Pleasanton and met his wife, D’Aun, while they were attending Foothill High School.
Roy’s second book, “Salvaged” is due out in January. You can check out his blog and books at junkyardwisdom.com

What American culture that is exported never fails to amaze. You expect the best and worst of Hollywood, but it was a bit different in Fortaleza, Brazil where I spent a week this month on a healing mission trip.
It’s a city of 2.6 million and is loaded with both upscale and middle-class high-rise condos and apartments. We ventured into a couple of malls in search of lunch in the food court (that was a good location last October in Brasilia). Of course, the Christmas decorations abound in the mall—all that was missing was Santa Claus in his chair—he was due to arrive the next weekend.
Driving around the city, I was struck by the signs promoting Black Friday. My email has been deluged with pre-Black Friday promotions, but there is a Black Friday in the United States. It’s the day after Thanksgiving. The inconvenient fact that there’s no Thanksgiving in Brazil hasn’t bothered enterprising merchants who have declared their own version of Black Friday.
It should be noted that I do not hang around or visit malls. I bought a BBQ from Sears online and picked it up at the Pleasanton store—I can’t remember when I went to Stoneridge to buy something.
In my two trips to Brazil, I have visited more malls that in the last several years at home.
I traveled with a team led by Bill Dew of San Diego

I believe that there are many good people in the Tri-Valley. They come in all sizes, shapes, colors, and ages.

Lots of residents in the Tri-Valley do Good Deeds on a regular basis either individually or as a member of an organized group.


I think that it's just fine that many folks shop and enjoy it!

If you choose not to shop...I don't care.

It's not likely that I or my buds will be pulled in by all the advertisements re: discounts ...doesn't work with this one...lots of those of us who are seniors do more interesting stuff...we like ke hang out, drink warm milk, tea, or coffee and we chat it up!!! yup...it's cool to hang out with talky seniors...VIVA SENIORS!

Doing more with the natural spaces we have
By Sherry Listgarten | 3 comments | 1,667 views