Being prepared saves a life at Pleasanton Middle School

Uploaded: Feb 14, 2019
Team members at Pleasanton Middle School were reminded of the importance of being trained and prepared for life or death situations.
During a lunch break in December, 6th grader Landon Comerford was playing around with his empty water bottle and had it in his mouth. He gave it a big squeeze and the bottle cap flew off and lodged deep in his throat. He was choking.
His friends ran immediately to the nearby office, telling the secretary, Cheryl Ways, what had happened. That sent Vice Principal Mike O’Brien and ealth Clerk Paige Austin-Camastro sprinting out the door to treat Landon who was walking toward the office.
O’Brien described him as “ashen” in his face. Paige ran behind Landon and squeezed with the Heimlich maneuver. The cap remained lodged so she and Mike switched places and Mike applied two powerful squeezes which dislodged the cap into Landon’s mouth where the nurse could remove it. 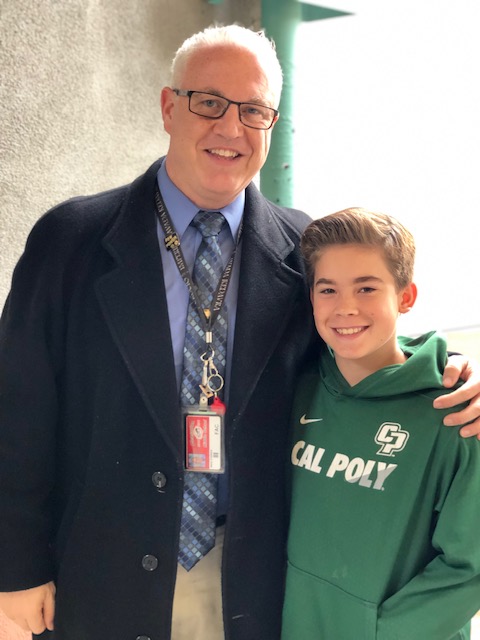 While they were tending to Landon, Cheryl called 911 to summon the firefighters. Once Landon’s throat was clear, everyone worked to calm him down, his mother came to the school and Mike said he and the office staff went about their business the rest of the day.
It wasn’t until the next morning when they all compared notes that they realized they had not slept well and the enormity of what could have happened settled in.
“It over in about 30 seconds, but it was the longest 30 seconds,” Mike said when we visited about it.
For Mike, who said he compartmentalizes school away from his family life, he received a reminder at dinner that evening when his daughter, Morgan, started to choke on a piece of chicken. Fortunately, she was able to cough it out. After that incident, he shared what had happened that day.
At school, they have been warning students about chewing on empty water bottles and this served as a timely reminder.
O’Brien also said that the incident has sparked a renewed commitment for the staff to be well-trained in CPR and the Heimlich maneuver and up-to-date on first aid training.
“It made us realize that we need to stay on it. Set aside days to teach our staff including trauma pressure points,” he said. He said that reviews of tragic school shootings have shown that some victims survive the initial shooting, but then die from loss of blood because nobody treating them by applying pressure to their wounds.
“Reality in this day and age, we need to train teachers to be sure that our kids and our schools are safe,” Mike said.
Personally, he has used the maneuver four times to save choking people. He has a bottle cap on his key chain to “remind him how precious life is.” He said “live life to the fullest because the slightest little thing can change everything.”
The message also was not lost on Landon’s father, Kevin Comerford, the founder of Service Champions (you have seen him on TV ads for his company). Kevin personally stopped by Pleasanton Middle School to thank O’Brien and others who had saved 11-year-old Landon. He calls O’Brien’s actions “heroic.”
He then decided that his entire team at Service Champions needed to be trained in CPR and the Heimlich Maneuver.

"I took that experience with my son and made the decision to offer training to everybody in my company," Comerford said. "It's a life-shaking experience to see someone choking and not be able to help them.”

"If you're choking, don't look to hide -- look for help," Comerford said. "And hope someone knows the abdominal-thrust technique."

"Things happen where somebody will start choking and walk away from the table because they're embarrassed, and the next thing you know they've collapsed and are found dead around the corner."

Comerford speaks from experience, having been involved with using the abdominal thrust five times.

Report Objectionable Content
Posted by EricBraithwaite, a resident of Los Cerros Middle School,
on Feb 15, 2019 at 1:40 am
EricBraithwaite is a registered user.


For the rest of middle school he pulled mostly B's and some A's, finishing middle school with a GPA just above 3.5. For high school Web Link he rather surprised us by volunteering to go a magnet school Web Link that focuses on college prep. He further volunteered to take 0 period PE so that he can have 4 years of foreign language plus an engineering Web Link class. So I am lucky that he was able to learn the lesson he needed to.


Thank you Tim for posting this story. Really informative and well written.
Awareness is so important and life saving. I would like to add that students can be CPR certified as well. My son is a lifeguard , and last year administered assistance to a gentleman in a grocery store parking lot. He and another friend, both CPR certified did not hesitate when hearing the wife's calls for help. The high schooler's other friends, quickly and calmly called 911. The gentleman fully recovered and was not in mortal danger. The boys were all calm and quick acting. Moral of story... the more students, co-workers, neighbors that are trained, the better for all.

How we eat away at our open space, even in Palo Alto
By Sherry Listgarten | 5 comments | 7,527 views