See Ed Hardy break through the establishment rubble to see the light of day at the retrospective exhibit of this underground artist. Inspired by traditional American tattooing and the culture of Japan’sukiyo-e era, Hardy broke the rules and went on to inspire a new generation of groundbreaking artists. (All images courtesy of the Fine Arts Museums of San Francisco.)

Sometimes when we least expect it, there comes a feeling of being alive. Often overlooked as another memory or sensory experience, it triggers feelings and connections that are strong: painful and beautiful.

This awareness may come in many ways at any time. The way the light falls across a face, long grass that waves in the breeze and reflections on the surface of water can trigger it. Or it may come by sound: a bell, a train, a call of some animal. Sometimes art induces these feelings and activates a kind of mixture of pleasure and suffering. These feelings get lodged in our being. We want them and search for more of them. Our awareness becomes attuned to them: shapes in the clouds, scents in the garden, stories of our ancestors.

Life uses these connections to keep the living alive. They wake us up and activate deep emotion. We feel at home.


It’s easy to see that Ed Hardy has always felt at home making art. The de Young retrospective of his work opens with two rooms filled with his childhood and young adult photographs, graphics, and drawings. They show his early fascination with the media, designs, and application of tattoo. The tattoos on the sailors and Marines in his neighborhood and nearby tattoo parlors in Corona Del Mar, a beach town just south of Los Angeles, inspired him. The next-best thing to a real studio was using colored and cosmetic pencils to draw tattoos on his neighborhood friends. Also in these first two rooms are drawings representing the next big influence: imagery from the hot rod, custom car, and surf cultures.

Later in high school, he visited the Ferus Gallery in Los Angeles, where he saw the works of artists such as John Altoon, Bruce Conner, Ben Shahn, and José Luis Cuevas. Hardy was not shy about reimagining and integrating the art he admired into his own work; these attributions are exhibited alongside his own. 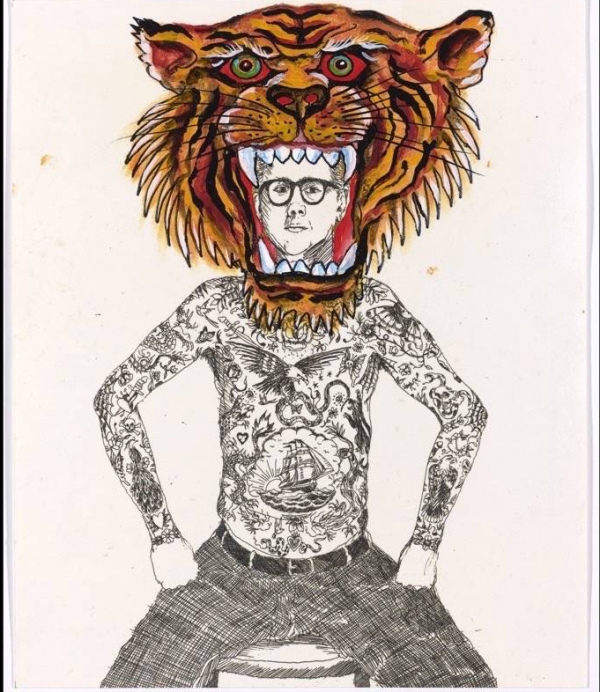 From 1964 to 1967, Hardy attended the San Francisco Art Institute, where he found a mentor in instructor Gordon Cook. It was Cook who reinforced the suggestion of a printmaking concentration to Hardy and directed him to the Legion of Honor’s Achenbach Foundation. There he studied original graphic works by artists such as Dürer, Rembrandt, and Goya; the collections inspired him to practice rigorous techniques that might find application with tattoo. The exhibit includes some of his more successful student graphic works. “Having graduated from art school, I brought with me to the field of tattooing—for better or worse—a sense of art history, a fierce dedication to the medium, and something of a chip on my shoulder toward the rest of the world that failed to hold the art of tattoo in the same regard I did,” he explains. Perhaps Hardy’s academic experience was a mixture of private exuberance and public agony. Even though the art gallery establishment in San Francisco and Los Angeles supported a diverse range of genres, from Realism to Pop Art to Abstract Expressionism, academic institutions can be cruel to students who are looking for validation for their own art that doesn’t fit into the genres championed by the teachers and students.

So, rather than accept a graduate fellowship at Yale, Hardy decided to apprentice with legendary Oakland tattoo artist Phil Sparrow. Hardy encountered a strong cultural bias against tattoo, and he was determined to elevate this “low” art into the realm of an important artistic medium. At some point, Sparrow opened a book of black-and-white photographs of Japanese men, their bodies stitched with images of Japanese myths and heroes, and said, “This is real art.” There were “snarling samurai warriors, rearing dragons, spitting gods of thunder and howling wind.” Hardy was hooked. His dive into the deep abyss of the subconscious and world mythologies, combined with his ability to collaborate with his clients, freed fellow subterranean daydreamers to treat tattoos as works of art.

Even though almost everyone involved in the fine arts considered tattooing low art, Hardy spent the next seven years mastering the craft in tattoo shops in Vancouver, Seattle, and San Diego. His next big step was to study and more fully master the Japanese style he’d learned first with Sparrow, which culminated in a move to Gifu City, Japan, to work under the Japanese tattoo master Horihide. In 1974 he returned to San Francisco and opened Realistic Tattoo, an appointment-only shop with the business slogan “Wear your dreams.” The image on the top left is an aggregate example of his drawing for tattoo clients projected onto a life-size mannequin. The image below is an example of a cartoon for a proposed body tattoo. 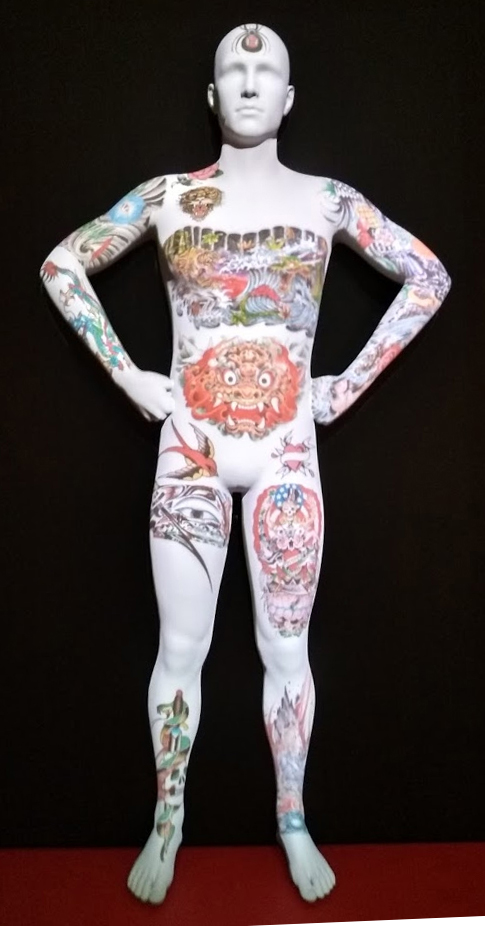 Tattoo flash (image made for a tattoo client) projected onto life-size mannequin.

Hardy never lost touch with the media and the history of fine art. He produced a profound body of work and exhibited in galleries across America. After retiring, in 2008, he created works of art that fused Eastern and Western aesthetics and iconography. “It’s about freedom,” Hardy says. “It’s about surprising myself and absolutely not charting out where I want to go.... I regained the type of consciousness I had in my art school days.” His genius was the reimagining of images, techniques, and genres from North America, Asia, Polynesia, and Mexico. By recombining styles and juxtaposing cultural and social images, he refined and heightened interest in tattoo. 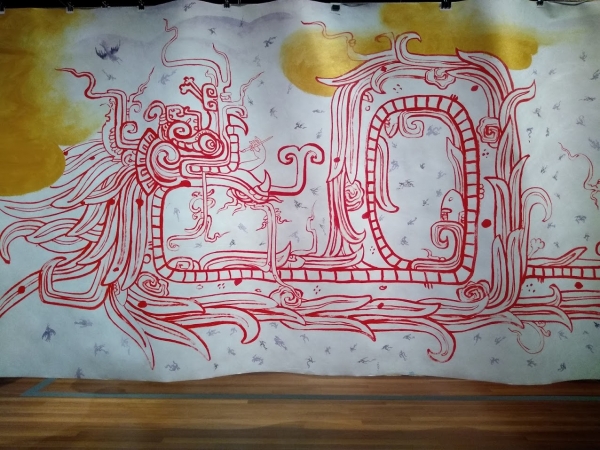 Of special note in the de Young exhibit is Hardy’s monumental 2000 Dragons, a 500-foot-long bravura brush painting on Tyvek that honors the millennial year 2000 as well as the Year of the Dragon in the Chinese zodiac. Other large-scale works called Eyecons, made in collaboration with Trillium Graphics in Brisbane, California, feature Hardy’s iconic imagery on three-dimensional objects such as disks, panels, and boogie boards. His paintings showcase his years of blending high and low art, plus a creative mind that samples cultures and styles. 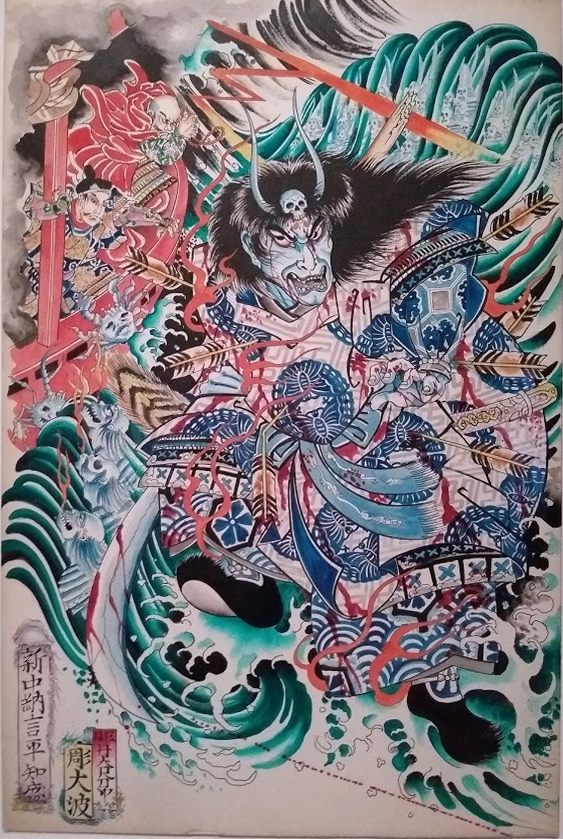 Stepping Razor: The Spirit of Taira
No Tonomori Seeking Revenge on the Forces of
Yoshitsune (tattoo design for back), 1980.


Most of the Western art world still considers traditional forms of folk art, including tattoo, to be “outsider art.” To my mind, however, tattoo fits comfortably into the genres and styles of traditional fine art media. Tattooing is as old as human beings. The imagery is highly graphic, using line to define form and identity. Many art media use the human body and movement as an essential element of the work. Like fashion and jewelry design and other works of art, tattoo lives with people in a most personal way. There must be some other reason for the objection to including tattoo in the fine art world.

The words most often used to describe outsider artists by the likes of Wikipedia, Oxford, Merriam-Webster, and others are self-taught, naive, unsophisticated, untrained, childlike, not in the mainstream art tradition. Typically, these artists have little or no contact with conventional, mainstream, or institutional art, because of circumstances not of their choice. Artists whose works exhibit extraordinary individuality, expressiveness, and creative innovation are usually socially and culturally marginalized by ghosting or psychiatric warehousing (see What Is Outsider Art? | Raw Vision Magazine). Some mainstream artists, most notably Jean Dubuffet, who coined the term Art Brut, took exception to this narrow-minded concept of aesthetics. I believe Hardy would agree.

If Hardy ever looked back with regret, it isn’t evident in the work. His sure, steady hand masterfully charges his allegorical, mysterious, and magical imagery with a wild, strange, and charming glow. He espouses an authentic way to channel our personal vision into daily life. Ed Hardy shows us how to live in our own skin by celebrating the superpower of creativity.

Thank you for this insightful look at tattooing, Bill Carmel. I have been struck by the sophistication of some of the work in this genre I see on Instagram. Of course the larger issue you address is the stranglehold institutional entities--museums and art schools--have on artistic expression. For example, other areas that have been traditionally overlooked and disregarded are the crafts that women pursue, such as knitting, fabric design, or quilt-making.


Thanks for sharing this wonderful art. I want to know more!


Very interesting. I was reading my son's art history textbook and after comparing this post to that I think you did much better in explaining what is what. Thank you Your work means a lot and I learned ever more!


Enjoyed reading the article and viewing the images! Thank You.

Four Reasons to Get Your MFA
By Elizabeth LaScala | 0 comments | 1,209 views