Meet the Dreammakers and Risktakers

Uploaded: Jan 28, 2020
If you were fortunate enough to attend the 2020 Dreammakers and Risktakers event last week, you left inspired.
The Innovation Tri-Valley Leadership Group presented the awards for the ninth time to students from Dublin, Livermore, Pleasanton and Las Positas College. Lynn Naylor, the Innovation CEO, noted that one characteristic that was common to the students was “grit.” They had that in common, but they were honored for wide range of achievements. Student were recognized for how they demonstrated creativity and innovation.

Four Pleasanton residents were honored because both the Tri-Valley Regional Occupation Program recipient and the Las Positas College recipient live here.
Contrast high school students Myles Molnar from Foothill and Megan Sloan of Amador Valley. Myles rolled his wheelchair up the ramp behind the stage. He noted in his remarks that he suffered the spine injury during wrestling practice three years ago. He was recognized for “spreading optimism, determination and positivity” with his fellow students and the staff. The attitude showed in the pictures projected that showed him with a huge smile whether sliding down the ski slopes in a special handicapped sled or water skiing. 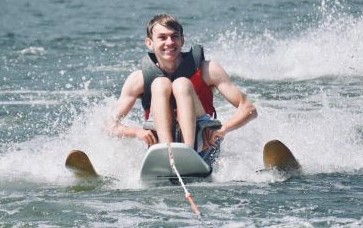 Chatting with Pleasanton schools chief David Haglund while walking into the event, he called Megan “a force of nature.” She was specifically honored for developing a cell phone app called the PRIDE button that salutes students for positive behavior on campus. She’s vice-president of the student body and participates in many other activities. She’s a junior. Amador Principal Josh Butterfield, in handing off the introduction to Vice Principal Eduardo Guerena, remarked about what a powerful force Megan had been in bringing positive change to Amador.

Haglund’s description of Megan could also be applied to Maodan Tohouri from Tri-Valley ROP. She recently spoke at an international teen conference in Nepal discussing how young people can be forces for change in their communities. She’s president of Students for Social Change, communication coordinator at Student Voice and is a member of the planning committee for the Tri-Valley Climate Change Summit. She’s also a Pleasanton resident and had role in the Tri-Valley Women’s March earlier this month. She told the audience that “our work centers around empowering voices to create the change they want to see in the world.”

Alexander Vasquez, now a junior at San Jose State University, was cited for his academic performance at Las Positas College. His chemistry professor, Mike Ansell, PhD, connected him with GenTegra for an internship after his sophomore year. While working at the medical storage company in Pleasanton, he contributed to a major development to stabilize RNA and DNA at room temperature. The advance will pay big dividends for researchers working in the field to collect samples. Incidentally, he’s the youngest of four children, all first-generation college students. When he finishes his degree in chemical engineering, he will be the fourth professional in the family. His parents moved to Pleasanton after he finished high school.

Dublin High honoree, Jeffrey Tan, was inspired by a vision challenge he had as a youngster to develop a new electronic screen for Braille. His Electrotactile Braille Display allows blind people to more easily use the Braille screen and at a fraction of the cost. Teacher Eugene Chou noted that she’s privileged to work with outstanding students and Jeffrey’s skill with robotics is well known, but it’s his work ethic that impressed her even more.

The final group of honorees, Granada High students, took on the vaping epidemic. Frustrated by the vaping on campus and in the restrooms, they organized and learned about the issue. They then educated their colleagues, the teachers and administrators as well as the district office, including Superintendent Kelly Bowers. Representatives spoke at school board meetings as well as City Council meetings. Alessandra Beltran, Ahalya Rajesh, Ariella Stewart, Dario Stewart, Will Taggert, Meadow Walton and Mason Wolf were recognized as the leadership team. Bowers pointed out that they convinced administrators that the traditional penalty for vaping—suspension—made little sense.

Nobody suspends anymore because it looks bad on your District Score Dashboard. Superintendent Kelly Bowers has now used vaping as an excuse for poor academic performance, when in reality the district is top heavy in district administration and her own $420k a year and rising compensation despite Livermore's continued lack of academic progress. Any money from Bower's vaping contingency lawsuit that the lawyers don't take likely will not reach the classroom as the board does not hold her accountable.

Great job for the other kids though. Truly remarkable achievements!

Report Objectionable Content
+   2 people like this
Posted by [email protected], a resident of Walnut Creek,
on Jan 28, 2020 at 10:38 pm
[email protected] is a registered user.

Does Applying to More Highly Selective Schools Increase Your Chance of Getting Admitted?
By Elizabeth LaScala | 0 comments | 1,073 views