During this time of shelter-in-place, keeping busy in healthy and creative ways challenges even the cheeriest of personalities. Artists usually find ways to occupy their time by making visual creations and playing visual games. My practice is to have at least four art projects going at the same time. I like variety. I like games.

From time to time, many artists challenge themselves by making visual images that are out of their comfort zone. Most of these visual ideas (about all kinds of subjects) I record in journals. Most interesting are images that communicate complex issues (metaphors and allegories) with the minimum amount of visual information. Some of the best at this are cartoonists such as Saul Steinberg, Charles Shultz, Pat Oliphant, and Dave Granlund. I make games and what I call “visual thought experiments” out of these metaphorical and allegorical ideas.

We use and understand metaphors, idioms, and symbols all the time in normal and unusual social interactions, and I’m interested in how these figures of speech may empower student learning in public schools. My latest thought experiment concerning metaphors of power, especially political power, follows. The challenge posed by a visual thought experiment is to compose the verbal description in such a way that the thought about the visual image suffices. If the idea and image are compelling enough, I then consider making the drawing, painting or sculpture.

Here is the strategy I use. First, I look for a likely topic or subject, which often suggests the appropriate metaphors. These metaphors stimulate thoughts about visual images from published sources that I can modify for my purposes. I find metaphors that have a strong visual component, and then compose the verbal description of the image and list the relevant visual references. Sometimes the visual/verbal idea is too complex to draw, paint or sculpt in a timely way so it lives on as a page in my journal.

My hope is that readers of the Art Space blog will consider creating their own visual games and thought experiments. If you create one, and are so inclined to share it, record your game or thought experiment by describing it in a Word document, and list the visual image references that come to mind (images as .jpg if possible, but .pdf is also acceptable). Then send it to [email protected] John and I will post the ones we like best.

The largest visual component of the allegorical image of power I have in mind is derived from the Dürer woodcut print The Four Horsemen of the Apocalypse. 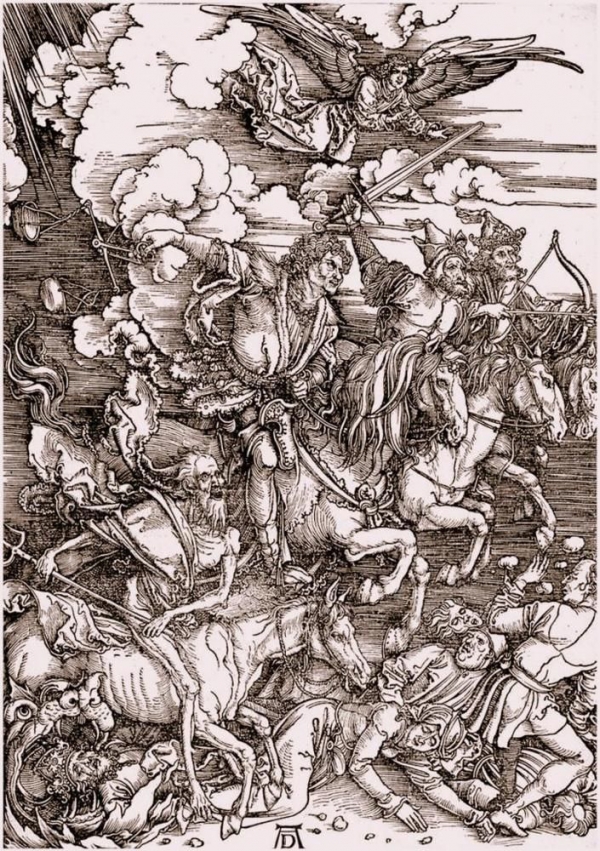 The first horseman (in front) has the head of Mitch McConnell. This figure wears a tattered Confederate Uniform and holds the scythe of death in one hand and the Constitution in the other.

The second horseman takes the shape of cartoon Baby Huey, with Trump’s face and orange hair flap, clothed in diapers and riding his charging horse. He lunges forward in the saddle (a highchair) and holds a big presidential signature pen under his right arm as if it’s a jousting lance. The other hand holds the sword of Damocles. 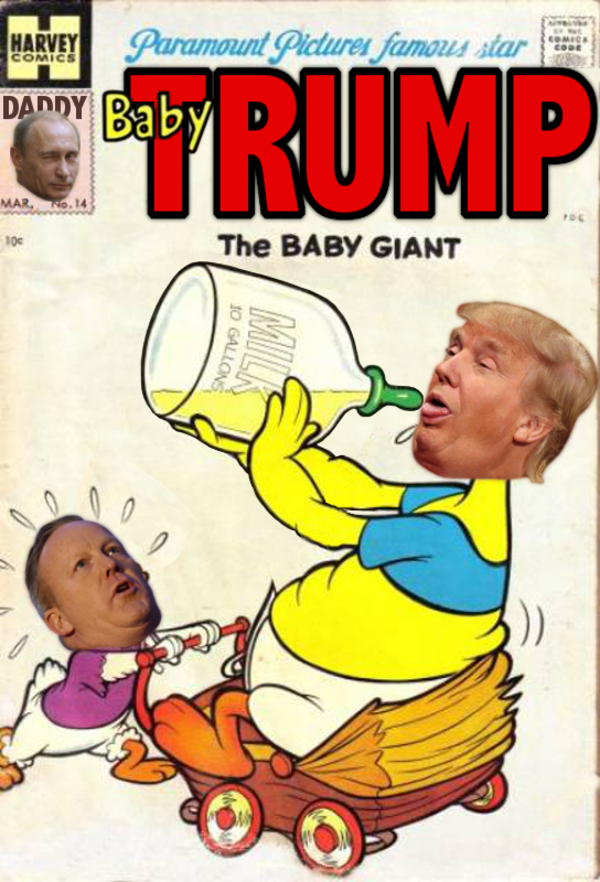 The third horseman, with the face of William Barr, wears the gown (robes) of Federal judges and holds the scales of injustice.

The fourth horseman, with the face of Elon Musk holding wads of cash in his left hand, litters the road with rechargeable batteries and toy cars and holds a large SpaceX rocket under his right arm. They all carry flags that have red spray-painted symbols of the dollar sign and swastikas. Trampled behind, underneath and in front of the horsemen are healthcare workers, citizens with voting ballots, immigrants with their documents, and children (as in The Massacre of the Innocents by Rubens).

In the background landscape are these images: the burning of the Capitol building in 1814, Washington Burns, from the Bettmann Archives at the Smithsonian; earthquake shattered Smithsonian Institute; the broken Washington Monument; and the Red Dragon of China devouring and defiling the Statue of Liberty (as in Goya’s Saturn Eating his Son). Surrounding the images of people, places, and things swirl the clouds of a vast Tempest of the Sublime. 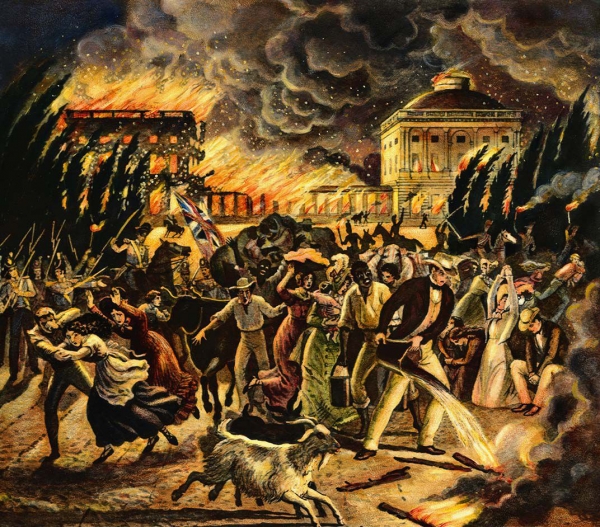 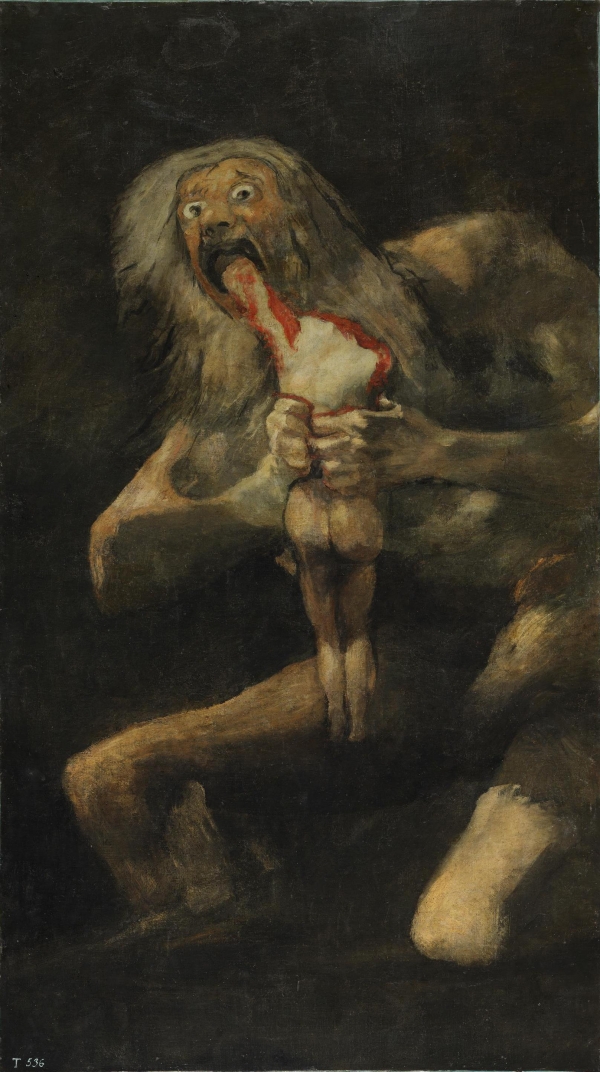 Here are the working metaphors:

Politicians are like diapers. They should be changed frequently and for the same reason. (Attributed to Mark Twain)

Politicians make good company for a while just as children do—their self-enjoyment is contagious. But they soon exhaust their favorite subjects: themselves. (Garry Wills)

Those who have been once intoxicated with power can never willingly abandon it. (Edmond Burke)

The jaws of power always open to devour. (John Adams)

Across all the globe there harshly blow the winds of change. No nation, however old or great, escapes this tempest of change (Dwight D. Eisenhower, 1957)

Those who foolishly sought power by riding the back of the tiger ended up inside (John F. Kennedy, 1961)

Good stuff, but ugly! The true face of evil. Described well. Thanks.

My college roommate painted a "Last Supper" scene with all the people replaced with children's cereal characters, like Captain Crunch and Tony the Tiger. Lead to a lot of heated discussions wherever he showed it.


This is an intricate and interesting idea. I feel a little breathless trying to follow its complexity. Will Bill execute this thought experiment with an artwork, or will it live as a hypothesis in his sketchbook? If he decides to render his concept, I'd love to see it; but either way, the idea will inspire.


Thanks for your comments and example, Jim. Yes, it is dark and "ugly". But, these are bleak times with sociopaths at the helm and I'm depressed about it.

And I appreciate you encouragement to complete the thought with action, Elaine. Give me a few weeks to render it and then publish it.