﻿ Theater in the Time of Corona | Art Space | John A. Barry And Bill Carmel | DanvilleSanRamon.com |

Theater in the Time of Corona

If all the world’s a stage, 2020 has presented a series of tragedies: plague, infernos, Beijing-plus air…. Amid all this, theaters—live and film—have been closed. Against this backdrop, how do you stage a theatrical production in front of a close-packed audience?

You don’t, says Eric Fraisher Hayes, artistic director of the Danville-based Eugene O’Neill Foundation. Before the pandemic proliferated, the Foundation planned to present three early O’Neill one-act plays—sometimes dubbed the “lost plays,” because they were overshadowed by later masterworks such as A Moon for the Misbegotten and Long Day’s Journey into Night, both written while O’Neill lived at Tao House, here in Danville.

With live theater impossible, Hayes decided to deliver the performances online, forgoing Zoom in the process. “I have not found Zoom theater offerings particularly compelling, so I sought another approach,” Hayes explains.

With Zoom out of the picture, Hayes and his actors developed a process in which he edited the scripts and then blocked the plays so that actors maintain safe distance and do not come into contact with each other. Hayes and his casts met three times. “At the first rehearsal,” he says, “we read through and discussed the scripts.” The next step was to block out the movements of each play. In the second rehearsal, “we ran through each play two or three times, so the actors could get a better grasp of the script and I could take notes on how I wanted to shoot the performance.” They shot during the third meeting, working through the script page by page and capturing the action from a variety of vantage points.

“My goal,” Hayes continues, was to take all the footage shot from various angles and edit it together in the most compelling fashion I can. I believe that the final result will tell a good story.” 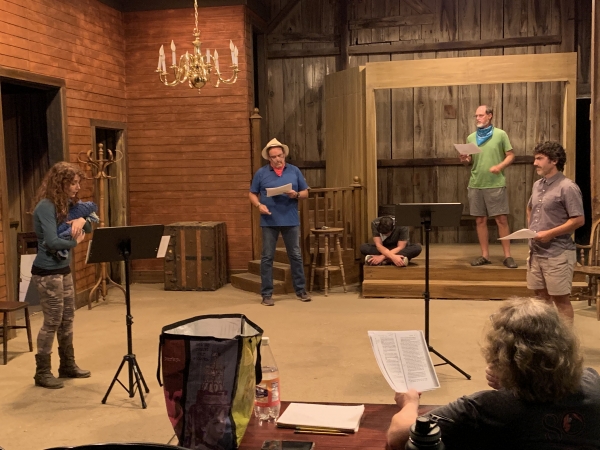 Rehearsal in the Old Barn.

Hayes elaborates on this approach here.

From a thematic standpoint, the plays are similar, all focusing on the limitations placed on women in the early 20th century—issues that still resonate today. Each play concerns issues of class, economic power (who has it and who does not), access to medical care, the right to have an abortion, and police bias. 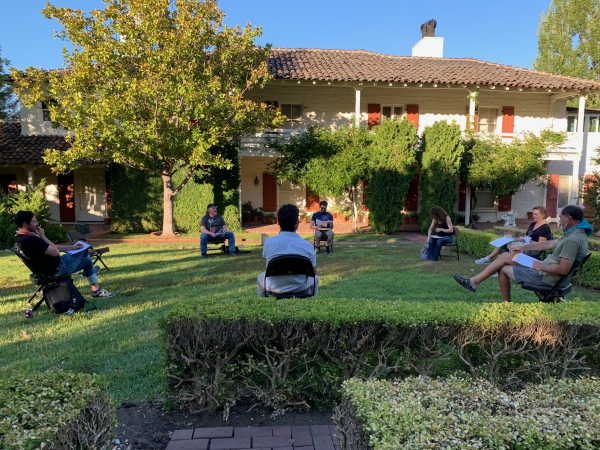 The Web (streaming October 3) deals with a woman trapped in a brutal relationship with her “boyfriend,” who forces her into streetwalking in order to support his drug habit. Recklessness (October 10) concerns a wife trapped in a loveless marriage and looking to escape with the family chauffeur. And Abortion (October 17) explores decisions at the intersection of social class and women’s reproductive rights. After these debut dates, the plays will be available indefinitely on the Foundation’s website

For details, including information about how to support this and other efforts of the O’Neill Foundation, please visit the Foundation’s website.

I led with Shakespeare and conclude with the Bard.

If Shakespeare had penned Lackbreath

To breathe or not to breathe, wracked by congestion.
Weather is no good; we are sidelined huffers.
Smog stinks and harrows, nasally importunes.
There’s great harm to we seething chuffers.
Shmutz tries our noses, rends them. At night we sleep
And snore through tight septums that won’t distend.
Breath intake seems closed down, as if schnozz is locked,
A feckless air slough; ’tis a blocked aeration,
Wheeze-snout-squeeze rues me. Miffed, I cry, I weep;
Out seeps tame raps inane, such as “Fudge!”
I feebly heave snorts dense till screams will come.
My screeches muffled as lung portals toil,
A whiffing pause, spared a deep breath.
Then I make calumnies, biting, strife-rife!
There’s no good air to sniff-adore; this clime’s
Oppressive pong makes me sound frog-rheumy.
I’m strangled by motes of dust that won’t belay,
Insults to the orifice that yearns
To halely aerate burgeoned intakes,
Until bookshelves quite riotously shake.
A repaired body, no barred swell air!
No grunts for breaths, sundered are teary gripes.
But that’s mere reverie; still-strangled breath
Has bummed me; I’m not comfy night or morn.
Reality returns; pumped full of pills
May I be, or snaring more than a dram
Of rye for comfort, down the piehole shoved.
Unconsciousness may bound me in its thrall;
Face may be graced with hue of dissolution.
Or swig pails o’ ale, till I lack of thought.
I’m damned to respire gray grit more moments.
Low pressure retards currents from the sky
That remove ash impaction.