“Painting has enriched my life more than I can ever say.” With these words, Alamo artist Margery Ammon summarizes the importance of the arts in her life. Although she holds an MFA in French, she has not employed that discipline professionally. Having started painting after college, she credits a love and appreciation of the arts as she was growing up with helping plant the seed. “The arts were valued in my family,” she notes. Ammon studied classical ballet and participated in many facets of theater; her father administered fine arts programs for the city of Downey, in Southern California.

The artist started drawing as kid but stopped at about age 10, in part because she judged herself to be “not good enough.” She didn’t take art up again in earnest until years later, although she had taken a couple of art classes in college and subsequently dabbled for a while in calligraphy. “I would write limericks for my friends for their birthdays and illustrate them in calligraphy and illuminated letters.” A five-line example from when she was 10 or 11:

There was an old woman of Wheeling
Who in the church was long kneeling
When asked, “What of that?”
She exclaimed, “Oh, my hat!
A bit of a nap I was stealing.”

Before Ammon got serious about painting, a friend informed her that she was taking a class that “I think you’d like.” Ammon called the teacher, who told her there was an opening and asked, “Can you start next week?” 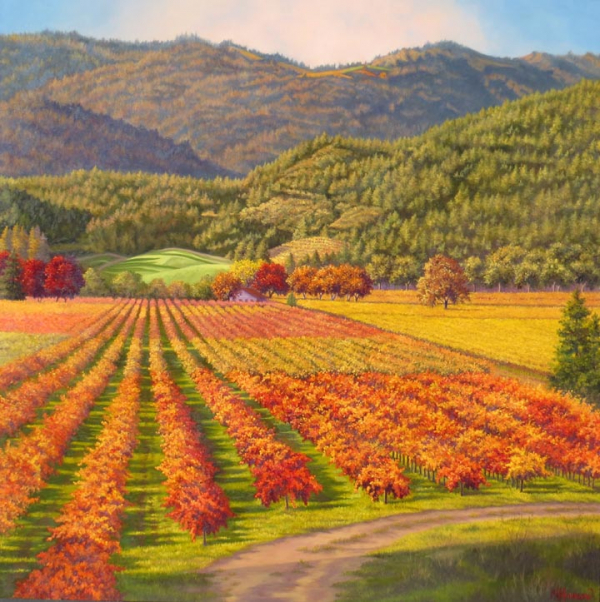 “I said, ‘yes,’ and that was the beginning of the whole thing.” She took a few other classes—color theory, drawing, hands and faces—but is mainly self-taught. Teaching, however is not for her, she says. “People I know who teach art don’t do art. They don’t have time to do their own art, as they’re participating in other people’s. I really wanted to make my own stuff.”

The stuff she’s made has been shown in California galleries in Carmel, San Francisco, Yountville, Danville, Los Gatos, St. Helena, and Truckee. She is currently represented at Art Obsessions Gallery in Reno and at Gallerie Amsterdam in Carmel.

Northern California scenes and scenery inspire her, she notes. Perhaps not coincidentally, Norcal features a Mediterranean climate, as does Aix-en-Provence, where she spent two years studying French in college. Aix was the home of French Impressionist Paul Cézanne. Contemporaries Van Gogh and Gauguin also worked in Southern France. These artists—as well as Velásquez and Vermeer (seventeenth century) and da Vinci—were seminal influences on her work. Another inspiration is the book Bird by Bird, by Anne Lamott. Although the book is about writing, Ammon says that its lessons are applicable to painting as well. She summarizes: “Go to where you work; work every day. Sometimes it’s good; sometimes it’s bad—but go. Put yourself on the spot, and do the thing.” 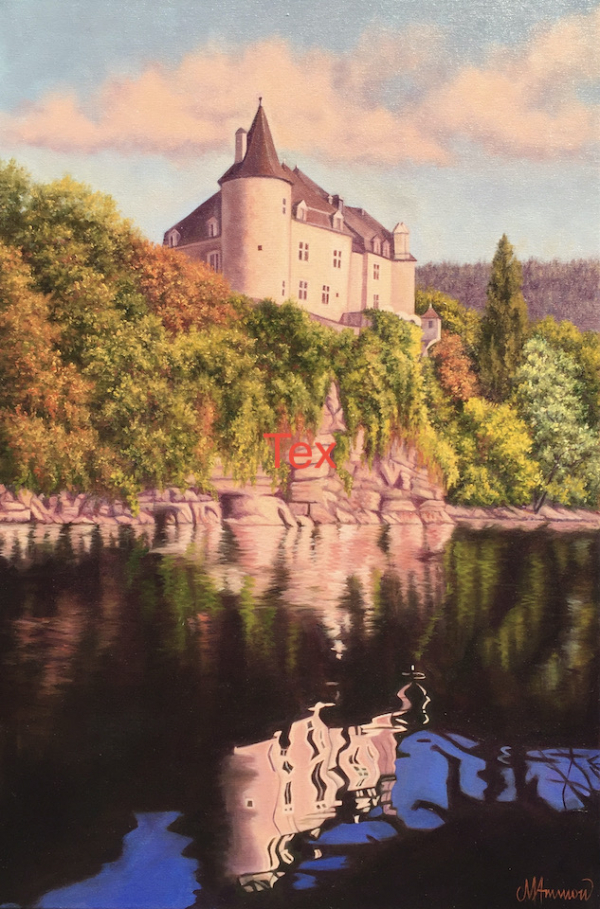 Ammon notes some of her accomplishments over the years:

• First place for the People’s Choice Award at the first biennial plein air show of the Napa Valley Museum in Yountville
• A request to mount the first of her solo shows in St. Helena
• A juried position in the National Association of Women Artists in New York
• Exhibition in Local Voice: Defining Community Through Art, at Walnut Creek’s Bedford Gallery
• A painting on the cover of Concierge magazine
• Being 1 of 10 finalists for the cover ofAmerican Artist magazine.
• Inclusion of her painting Spring Explosion in the de Young Open Exhibit in San Francisco, October 2020 to January 2021
• Being featured artist at the Art, Wine, and Car Event at the National Automobile Museum in Reno

In previous years, as Ammon was visually fledging, she painted primarily vineyards, of which there are plenty in the northern part of the Golden State. She then “branched out” to do still lives, river scenes, mountains, and some portraits. Her landscapes, she says, are impressionistic, whereas her floral paintings are realistic.

For several reasons, Ammon favors oil over acrylic. She finds that colors in oils are more vibrant. “I like the texture, thickness, and intense color you can get.” Because the medium stays wet longer than acrylic, she can easily make changes along the way or repaint completely if she wants to. She says that she avoids plein air painting, because the light changes too frequently and quickly. But she does start outside. “Photos inform my painting,” she notes. She often shoots scenes she intends to paint and then works from the photographs in her studio, a light-filled room in her home. She listens to instrumental classical music while working; “It calms my mind. If I were to play French music with lyrics,” for example, “I would have to listen to the lyrics.” 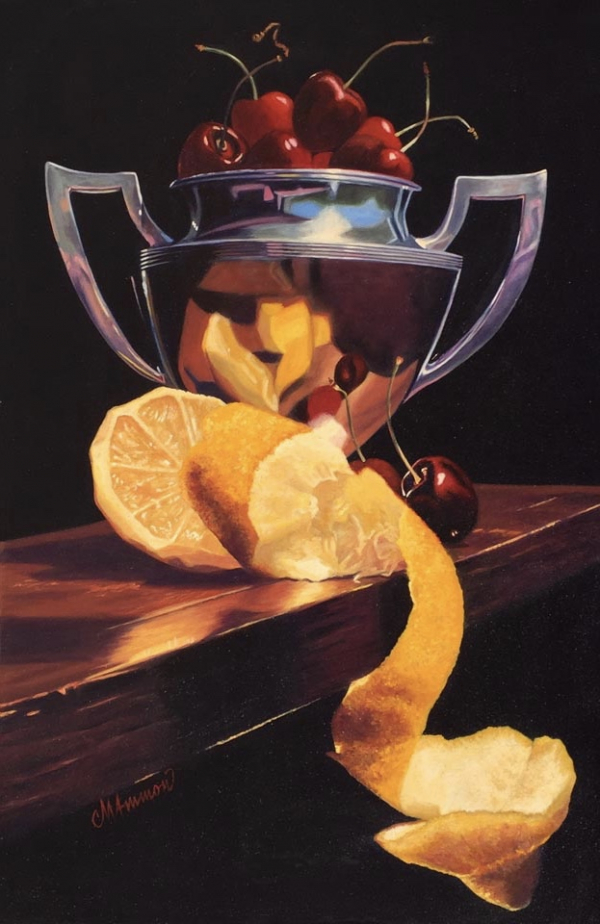 After many years of making art, she says that the old joke about Carnegie Hall is apposite. A New Yorker responds to a tourist’s question: “How do you get to Carnegie Hall?”

Also key: “Bring your own personal style to your work.” And “Train your eye to see,” while “getting out of your own way and avoiding judgment.

“I think that comes from the theater. You prepare and prepare—learn the lines and the blocking—and then when you’re on, you just have to be there and let it happen.”

For more about Margery Ammon and her work.

medi kush is a registered user.


Thanks for sharing such a wonderful post with us. I really liked the way you described all the things clearly and to the point. Keep up the good work. Many thanks for sharing. Web Link

Doing more with the natural spaces we have
By Sherry Listgarten | 6 comments | 2,573 views