"For me, people come first. I have tried to assert the dignity and eternal importance of the human being." – Alice Neel

Viewing the recently closed Alice Neel exhibit was a profound experience for me. I first saw a portrait she painted during a visit in 1983 to New York. It showed a man who wasn’t a comfortable sitter. The painting represented everything that people say makes a great artist. It captivated me. I still remember the feeling I had standing in front of it, even though I’ve forgotten most every other thing about that time in my life. I still remember the blue lines, the green tint in the face, the awkward pose, and the awkward left hand. The artist wasn’t awkward; the sitter was.

Neel spent the majority of her life in New York City, where she sought and painted people who lived nearby, people for whom she felt an affinity, or people she wanted to sit for her. The exhibition includes all varieties of portraits: feminists, social justice advocates, politicians, queer activists, nude figures, pregnant mothers-to-be, corporate hucksters, and artists, to name a few. Under all of these depictions resides the glow of humanity.

In the December 2, 1950, edition of The Daily Worker, Neel wrote, “There isn’t much good portrait painting being done today, and I think it is because with all this war, commercialism, and fascism, human beings have been steadily marked down in value, despised, rejected and degraded.” She could be talking about today’s War on COVID. In 1951, author Mike Gold paid tribute to Neel in a brochure for an exhibition in the Playwrights Theater, New York, when he said that “Neel is a pioneer of socialist realism in American Painting.” 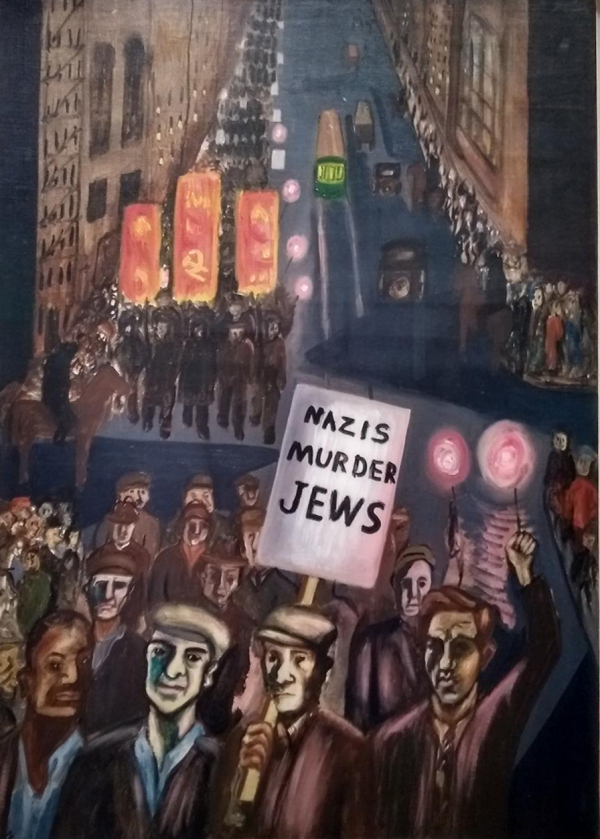 This painting depicts the 1936 May Day parade “that drew more than 40,000 Communists and Socialists of various gradations of revolutionary tendencies,” as reported in the New York Times. The prominent figures in the foreground represent other artists in the Works Progress Administration and allude to the aspiration of racial equality and the German Nazi regime’s murderous anti-Semitism.” 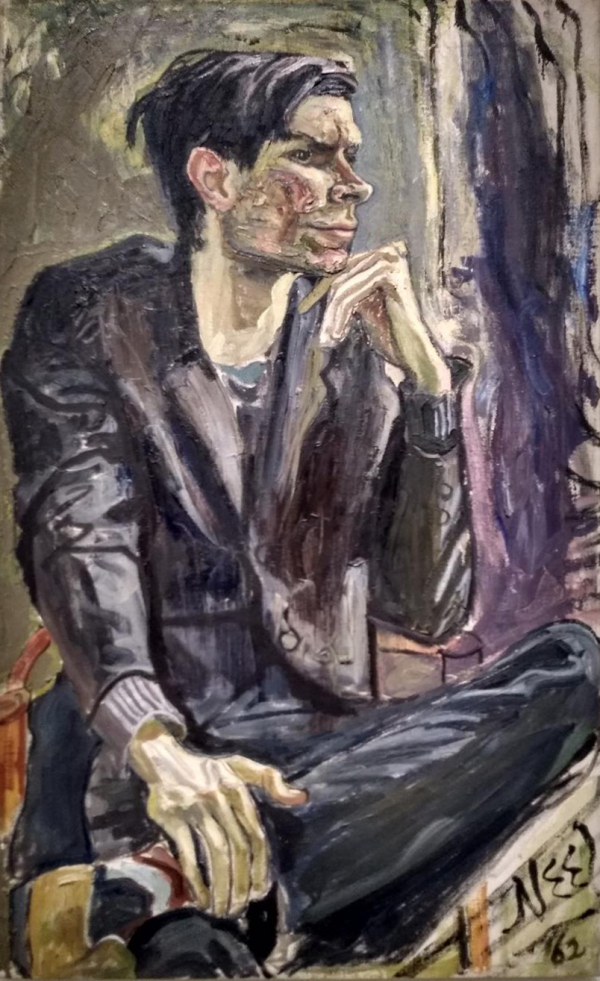 “Neel invited Smithson to sit for her and sketched his gangly frame with virtuosic strokes, highlighting his sharply angular features. Notably, she rendered his acne-stricken cheeks in a manner typical of her unvarnished approach, imbuing Smithson’s intensely focused and brooding stance with a sense of human frailty.” Smithson died tragically in a plane crash three years later. 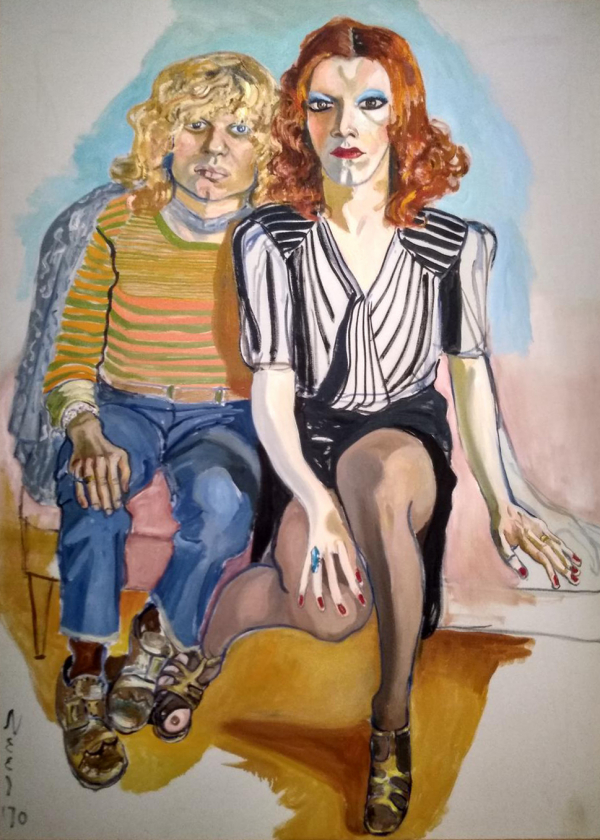 Jackie Curtis and Rita Rudd, 1970, oil on canvas, The Cleveland Museum of Art

Neel depicts the red-haired gender-nonconforming performer, Rita Rudd, leaning forward into the spotlight, casting her collaborator friend, Jackie Curtis, into the shadows. Linear patterns of paint enhance the striking features of the sitters. Neel also draws our attention with the arrow-shaped shadow of the frontmost foot which points to the big toe of the other foot, to the revelation of the toe breaking through the pantyhose.

Neel makes these kinds of notations as a way of detailing the inner life of her sitters. She is genuinely interested in people and persists in having them pose naked. 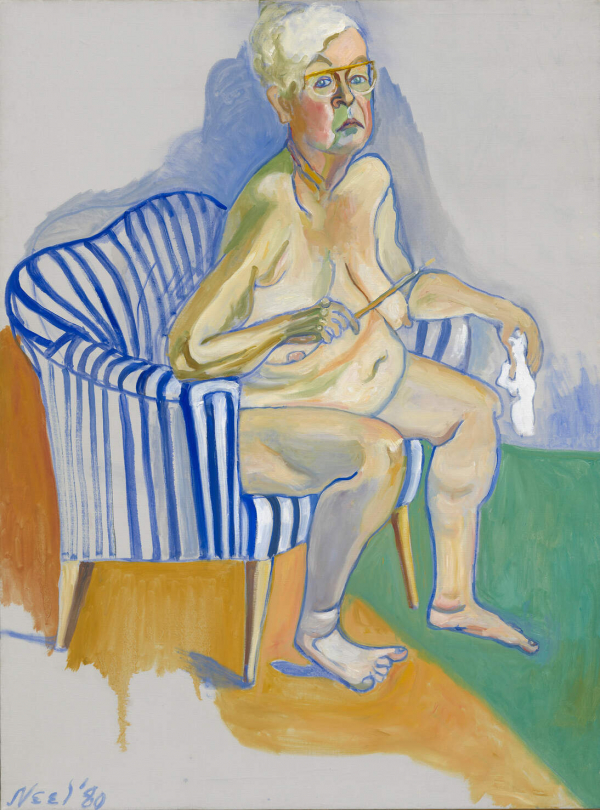 “For most of her life, Neel painted the bodies of others. At the age of 80, she finally turned her attention toward herself: Neel’s Self-Portrait, 1980, depicts her aging body, rendering visible the cumulative physical effect of six decades spent sitting at her easel.” Totally self-confident and steady, she describes the passage of time by saying, “My flesh drooping off my bones.” This self-portrait is typical of Neel. Her lively and evocative use of linear marks and colors call out to a new, positive feminist generation.

“When viewed as a unified ‘body’ of work, Neel’s nudes offer a radical revision of one of Western art’s most persistent themes." Although direct and basic in appearance and devoid of sexual objectification, these figures allow a psychological insight into humanity that is beautiful and powerful. I imagine that when Neel talked to herself, as when she conversed with her sitters, she spoke plainly and authentically. She sees herself as a fact of life. Her left foot is in the green of life, and her right foot is in the ocher—straddling the shadow and herself.

“I come under the spell of a person—out of myself into that other…. I do not pose my sitters. I do not deliberate and then concoct. Before painting, when I talk to the person, they unconsciously assume their most characteristic pose, which in a way involves all their character and social standing—what the world has done to them and their retaliation.” Each person, including herself, who models for her is dismantled like a car in a wrecking yard. Neel engages these people in conversation, strips away the extraneous, takes all the parts her sitters present to her, and then recycles them with respect and dignity. The artist is open and determined as she reveals the self-identity of her sitters. The portraits are as clear as they are unvarnished, unapologetic, and unconventional. They are never brutal or disparaging. The work is astonishing. And wild.

Except as otherwise indicated, all quotes are from the de Young catalog for the exhibit and the Exhibition essay by Lauren Palmor, Naked Truth: The Radical Candor of Alice Neel’s Nudes.

Our First Anniversary in my Husband’s Retirement
By Chandrama Anderson | 0 comments | 2,702 views