The careers of playwright Eugene O’Neill and visual artist Salvador Dalí intersected during the twentieth century. O’Neill’s birth preceded that of Dalí by 16 years, and O’Neill died 36 years before the Spanish Surrealist. But during a period of 30-plus years, the two men were simultaneously working in their respective fields.

Although the two artists worked in different media, they shared an interest in the subconscious and its manifestations. They also shared about a decade’s worth each of residence in the Golden State—O’Neill locally at Tao House in Danville, where he lived from 1937 to 1944. In marginal health, he was drawn to Danville by the climate and the solitude.

Dalí emigrated to the States in 1940 in order to protect his health from the Nazis, who would surely have viewed him as a producer of “degenerate art.” Some avant-garde artists were murdered by the Third Reich. He lived and worked in Monterey for a decade.

Thanks to valiant efforts of local residents, Tao House was preserved from the wrecking ball and today is a national historic site. Thanks to the efforts of the Piterman Family, Monterey is home to a large collection of Dalí works: 580 pieces, including lithographs, etchings, and sculptures, mostly from the 1960s, ’70s, and ’80s. (Dmitry Piterman emigrated at age 15 to California from Ukraine in 1978 with his family to escape Soviet pogroms.)

I recently visited Monterey’s Dalí Museum, which appeared rather small, based on a quick look at what is exhibited on the ground floor. But then I went upstairs.

Among the extensive exhibits are dozens of woodcuts illustrating Dante’s The Divine Comedy. Dalí created them after being commissioned by the Italian government in 1965 to illustrate the author’s opus in commemoration of the 700th anniversary of Dante’s birth. The Comedy features 100 cantos.

Only six cantos grace The Cantos/Songs/Dirges of Maldoror, by the Comte de Lautréamont (nom de plume of Uruguay-born Isidore Lucien Ducasse, 1846–1879). Published in 1868–69, Maldoror (a homophone of mal d’aurore [evil at dawn) is considered to be a precursor of Surrealism, a movement of which Dalí was a primary exponent. He illustrated the book with 42 engravings. 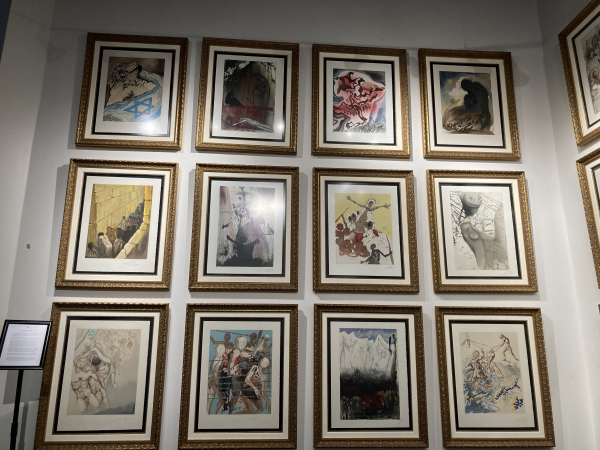 Aliya, commissioned in 1966 by Samuel Shore, head of Shorewood Publishers. The suite of lithographs—enhanced with watercolors, gouache, and India ink—were meant by the artist to commemorate the 20th anniversary of the establishment of Israel. The suite’s title translates to “migration to the land of Israel.”

“Carmel Is the Place for Me”

My last Art Space entry (“A Trip Down Galmory Lane”) summarized the dearth of galleries in the Danville area due to the death of so many. But some didn’t die…they merely migrated. In “Galmory,” I wrote about Stephen Sanfilippo and Kevin Milligan, whose Danville spaces had vanished only to reappear in Carmel. Another local gallery entrepreneur, Jennifer Perlmutter, relocated her Lafayette gallery to Carmel. Milligan and Perlmutter are in downtown; Sanfilippo is in The Barnyard, a collection of galleries and shops a few miles southeast of downtown Carmel.

Perhaps summing up the sentiments of his fellow émigrés, Milligan says, “Carmel is the place for me.” The reasons for the migrations are multifarious.

Why Carmel? Well, to paraphrase Willie Sutton: When asked why he robbed banks, Sutton responded, “Because that’s where they money is.” Unlike Danville and environs, Carmel is where the art is…a destination for artists and art buyers. Downtown Carmel features about 50 galleries, according to Perlmutter, who sells her work and that of a rotating guest artist at her Dolores Street gallery, between 5th and 6th. A little hard to find if you don’t know where it is; Carmel has no street numbers.

Wouldn’t the plethora of galleries lead to intense competition? I asked her. “There is competition,” she said, “but there is also a sense of community.” There is also a variety of art for sale, from kitsch to landscapes to abstracts. An abstractionist, Perlmutter noted that landscape and figurative works tend to predominate, but “right around here (Dolores Street), there are several galleries with abstract work.”

Aside from Carmel’s being where the art is, what else prompted Perlmutter to move? “A friend suggested that I try Carmel for three months.” During that time, she was also operating her Lafayette gallery as well as a pop-up gallery in a former bank building. “Just look around at this beautiful place,” she enthused. Carmel is truly quaint and picturesque. Perlmutter vacated Lafayette in 2021. “We were already pushing a boulder up a hill in Lafayette. And then the pandemic hit!”

She explained that several people in Lafayette lamented her departure but no one “stepped up” to attempt to continue gallery operations in that city. Coincidentally, as I was talking to her, a man walked in and asked if the Lafayette space was still open…said he liked her work. No, she said, suggesting that perhaps he should lease the now-empty building and revive the gallery.

At her current location, she has sales space on the main floor and a studio below that. Customers come regularly from all over the US and other countries as well, she noted. 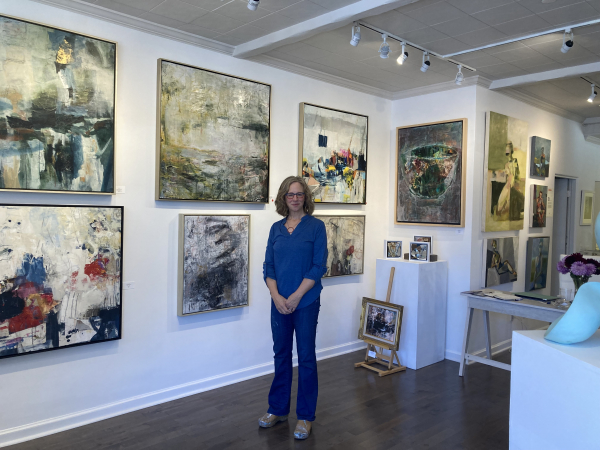 Stephen Sanfilippo also stresses community. He acknowledges that The Barnyard is off downtown’s beaten path, but he and several artists in the vicinity of his gallery get together frequently to compare notes, have coffee, etc. His gallery consists of two exhibition areas and a small studio in the back.

Unlike Perlmutter, Sanfilippo is primarily a plein air painter. Prior to leaving Danville, he had two spaces in the Rose Garden shopping center, but they were more of a place to hang out, he explained. Not a lot of art buyers traipsing through the Rose Garden.

His path to Carmel was somewhat circuitous. Initially he moved to Pacific Grove. “I had painted lots of Danville-area landscapes, but I wanted to do seascapes.” While in Pacific Grove, he got an opportunity to rent a small space, where he started showing his work. But, as he noted, Pacific Grove is not Carmel. Eventually he found an apartment on Mission Street in Carmel, above a vacant storefront. He saw an opportunity and opened a gallery in that storefront space. Two years later, “the pandemic shutdown came along.” He said that in the early days of the pandemic, downtown Carmel was a virtual ghost town. He wasn’t selling much at all.

The Barnyard offered a more affordable alternative, so he opened his Cypress Coast Gallery there. Business has been good enough, he says, adding that he needs to do more to promote his gallery. In addition to his own work, he has pieces by other artists on the walls. 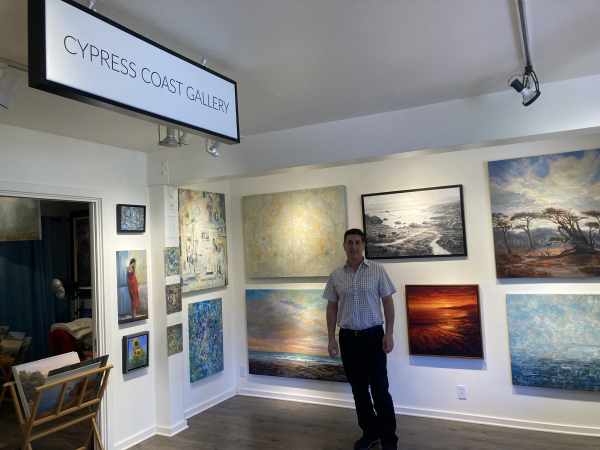 “I used to make fun of people who named their galleries after themselves,” Kevin Milligan said with a smile. The Kevin Milligan Gallery is on Lincoln Street, not far from Perlmutter’s. (All Carmel galleries are fairly close to each other in the densely packed downtown.) His journey to Carmel was also circuitous. He started the gallery game in Mendocino, where he painted geographic locations as well as houses in the area and sold his work.

Then he came to Danville and opened a gallery on Hartz Avenue. He had ambitious plans to add a wine bar, but difficulties arose—from the town and from his landlord. Costs were prohibitive. And, because of regulations, “I could sell a bottle of wine, but I couldn’t open it!” He continued, “I was selling art like crazy in Danville, but the landlord was….” a less charitable name than “a problem.” Fed up, he joined the exodus to Carmel, where he is happily ensconced as joint owner of his gallery with Patricia Dillon.

Milligan is a writer as well, with two “coffee table” books to his name: Mendocino, a Painted Pictorial and Big Sur to Mendocino. He acts as his own publisher, with editorial and layout assistance before he has the books printed in China. He said that his first press run of 1,000 copies of Pictorial sold out so he ordered another run. 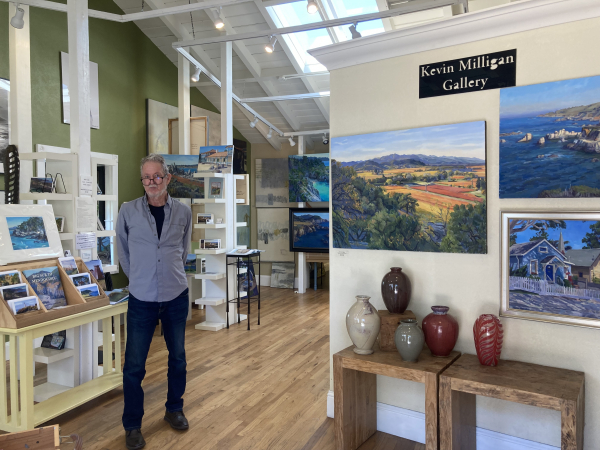 Operating a profitable art gallery is a challenge—one that these three émigrés appear to be meeting. But to make it work, Perlmutter said, “You have to go all in.”

Milligan concurs, adding: “You have to be a fighter to survive in the visual arts. When tourists visit Carmel, they are in a different mindset than back in their hometown. They are off the gerbil wheel for a while and have time to ponder other things, such as what matters to them most. Family, art, etc. This different mindset is more likely to result in an art purchase.”

How we eat away at our open space, even in Palo Alto
By Sherry Listgarten | 5 comments | 6,457 views