In January I profiled Rossmoor resident Karl Livengood, a retired social worker involved with the Rossmoor Senior Tutors Program. He also coordinates the Fine Arts Program for the residents of the Orin Allen Youth Rehab facility in Byron. When I wrote the blog, I had just joined Fine Arts as a volunteer and concluded: “Over time I hope to mount a trAction Painting event at the facility.”

I finally did just that. Over two sessions in early June, my volunteer associates and I guided six to eight boys in the creation of a 7 x 10-foot trAction painting. In the first session, they wielded Razor scooters and laid down lines on the blank canvas. I’d hoped they could apply four colors, but time and drying constraints limited them to black, purple, and orange…no time for green.

The plan was to delineate shapes with the scooter lines that could be filled in with brighter colors in the second session. Black, I figured, would accentuate the unfilled patterns. But we ended up with too much black, which was dominant at session end. To tone it down a bit, I hit the canvas with some white.

Another issue involved scale. Most of my work to date has been with elementary school kids. But the facility residents are adolescents, some of them pretty big. Their size, combined with their scooter proficiency and alacrity, meant that the canvas filled up fast. Should have had a larger sheet. So my initial reaction to the painting at that point wasn’t favorable. 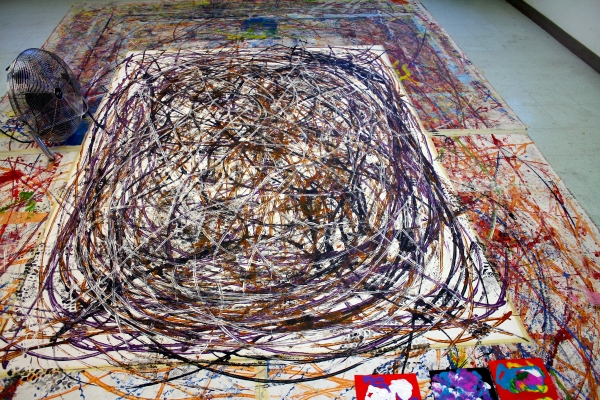 The painting at the end of session 1.

However, on seeing it the next week, I was more optimistic. It definitely had potential. Residents and volunteers ringed the canvas and contemplated how best to finish it. We searched for patterns in the lines and spaces, decided which would be good to fill in and which to leave blank. We also thought about downplaying some lines and accentuating others. A transparent wash over a group of lines could allow the lines to show through in a muted fashion.

After our contemplative session, the boys got to work. They used brushes, sponges, and paper towels. Several pressed handprints onto the canvas. After I told them about Jackson Pollock and Action Painting, a couple tried drip and splatter painting. Some of the volunteers added a few flourishes to the painting. 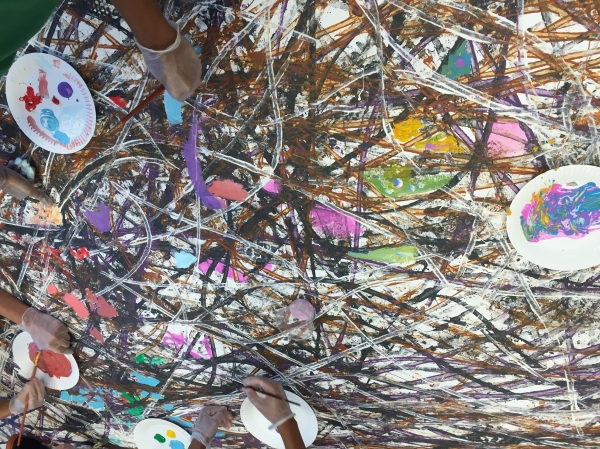 When we decided that it was done, we left it to dry until the following week. The boys enjoyed the project and learned a bit about Pollock, Process, and Action. The next week, we hung the finished work on the dining room wall, next to the large mural they’d painted earlier in the year. 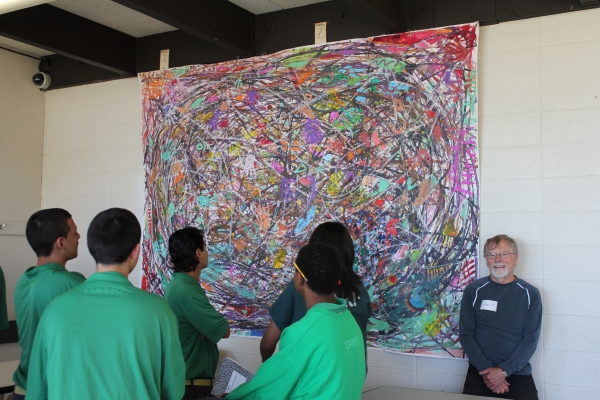 Next year I plan to have the class paint my ancient Toyota minivan.