(JAB note: This site limits the number of images that can be posted. I will attempt to post more images from Bill's review in a follow-on entry.)

I admit that anticipation of this show at SFMOMA featuring two artists whose work I admire was exciting for me, because a museum filled with many pieces of an artist’s work over a lifetime provides an opportunity to witness the evolution of an artist’s visual thoughts. Since Richard Diebenkorn attended exhibitions of works of Henri Matisse and studied original works in local collections, this exhibition places the relevant original works of both artists side by side as examples of the firsthand source material that served as Diebenkorn’s visual edification.

The big idea here is that Matisse is demonstrated to be a significant influence upon another artist, Diebenkorn, and the result is that Diebenkorn was inspired to take his painting to a new, higher level. Such a scenario is played out by creative people in all disciplines all the time. This exhibit demonstrates the idea that a creative person may be drawn ineffably to the work of another artist and that this attraction may then transform the creative person’s new work into something both authentic and masterful. This is an iconic concept, especially for young artists: incorporating the natural attraction to external images, wordplay, sounds, movement, ideas, and the other elements and principles of composing, theorizing, and innovating so that this information enriches the new work.

This exhibit does not disappoint. The curators included works that document Diebenkorn’s rise into mastery and his profound love of Matisse’s work. Diebenkorn actively sought out and studied the original work of Matisse and collected reference material about Matisse for his library.

The paintings are arranged chronologically and thematically so that comparisons of painterly technique, style, and composition can be easily observed. When and where Diebenkorn saw what of Matisse is graphed well at the exhibition’s beginning. The first room offers an introduction showing the beginnings of Diebenkorn’s fascination with Matisse.

One of my first observations was that Diebenkorn and Matisse shared a similar color palette, as do many artists who paint with pigments made into commercially available paints. What is most striking is that both artists extensively employ the old masters’ technique of applying a wet color over another dried color to achieve a third color effect. It must be that Diebenkorn looked at the Matisse originals very carefully, because the underpainting colors and the scumbled (overpainting) colors are so similar in many examples in the show. Both artists use an ancient technique in which a complementary color is painted over the underpainting color. Similar oranges are painted over similar blues, similar reds are painted over similar greens, and similar violets are painted over similar yellows, and vice versa. Precise control of shade, tint, and hue is possible in this way. In many cases, the overpainting is so thin that it can be called a glaze. Frequently the mixing of white paint with other pigment to achieve a pastel tint is similar in both: cobalt blue mixed with white over magenta mixed with white. 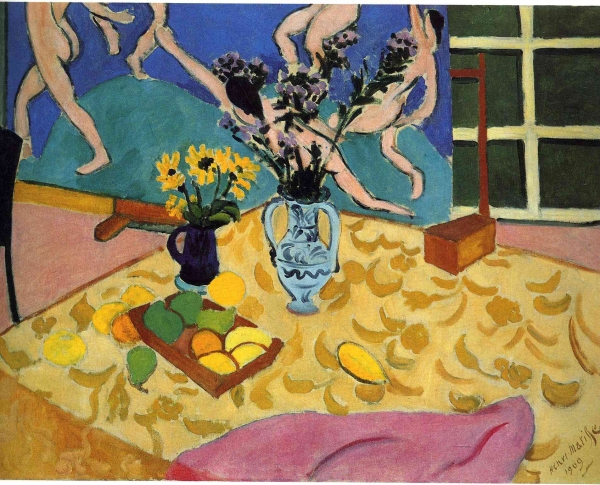 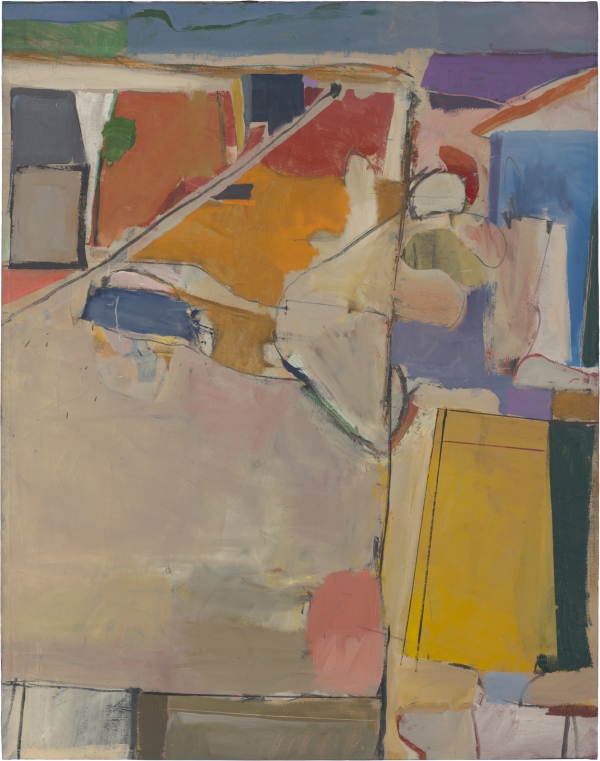 Throughout his career, and with care, honor, and devotion, Diebenkorn used visual passages and designs from Matisse. This is especially evident in Diebenkorn’s travels to Russia’s Hermitage Museum and the pattern of wallpaper contained in Matisse’s The Red Room. Also note the grillwork in architectural iron railings in both. The references are not exact, not verbatim, but changed in subtle ways so that the designs, forms, and space become part of a growing personal visual vocabulary, the lexicon. 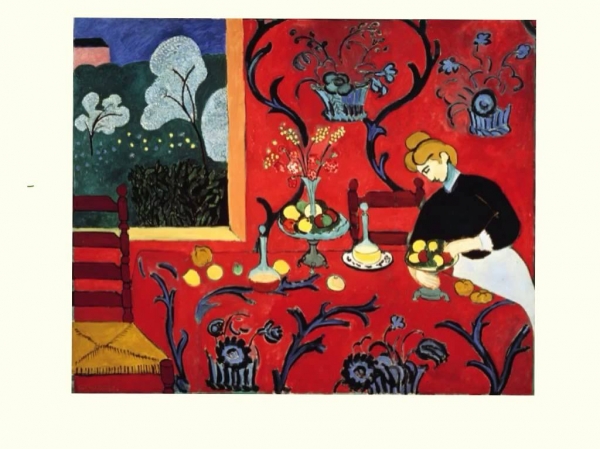 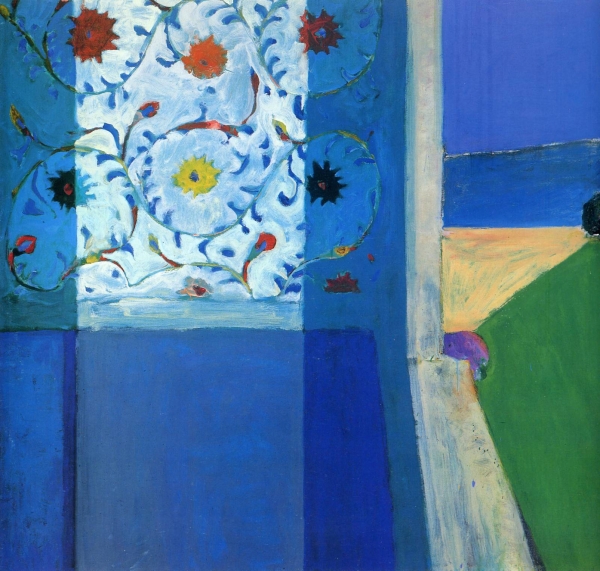 Recollection of a Visit to Leningrad, Diebenkorn


This is the nature of creativity, a known phenomenon, where creative people may come across other artists’ creations that inspire them and capture their attention and this condition opens the inspired artist to create something new and original. The exhibit invites this to happen. We all dip into the same river and come out with something different. This is one of the best examples of emergent thinking. Emergent thinking happens when certain facts are taken in and applied to consciousness without being analyzed in a scientific way. Matisse took the aesthetic information in his time and transformed it into something different than before. In his time, Diebenkorn took the aesthetic information from Matisse and transformed it into something new and wonderful.

One of the benefits of the younger artist’s studying the older is that the younger can view the evolution of the elder’s work. The paintings of Matisse become looser and looser (painterly) as time goes on, in both the underpainting and the scumbling. As is the style of many contemporary artists, Diebenkorn uses expressive, painterly strokes to paint a form, a space, a part of a canvas. Matisse would have seen this technique in painters around him and in historical paintings during his lifetime. Diebenkorn had even more occasion to observe the loose brushstroke technique and used it to great advantage.

Abstraction as a principle of constructing form and space became mainstream during the life of Matisse. For Diebenkorn it was part of the milieu.

The exact movement of the artist’s body during application of paint is unique to each artist. I saw it first in the work of Rembrandt and then understood more when I saw Frans Hals and then J.M.W. Turner. I call it the visual representation of the central nervous system. Turner learned from Hals, Hals learned from Rembrandt, and so on. Matisse would have seen many examples of all these artists’ work during his life. Looseness of marks is a hallmark of style in art that has been present since the beginning. What is prized among working artists and collectors is the individual precise control of these loose marks. The mystery unfolds in our consciousness as these marks are observed and processed by our brains into form, space, and meaning.

One of the images Diebenkorn uses in many of his figurative and interior compositions is the folding chair. It is everywhere in the work on display. Such chairs are ubiquitous in artists’ studios. When I saw the folding chair image in many drawings and paintings, it occurred to me that the folding chair can be used as a metaphor for how he constructs the space of his interiors, his figurative work, his landscapes, and finally his large abstractions. This kind of chair is easily folded and easily transported to wherever needed. This is what I see Diebenkorn and Matisse do with the spaces and forms in their canvases. The larger geometric divisions within the picture plane divide the space into areas that contain multiple perspectives and points of view. Cubism developed during the life of Matisse and by 1910 had become commonplace as a way of folding and unfolding space.

There are many historical variations on how space is divided so that information about different scenes of a story may be revealed. Consider a painting, The Annunciation, from the early Renaissance, that tells a story; different events in the story are portrayed in different parts of the painting. The painting, by an unknown artist, is in the Italian section of the Palace of the Legion of Honor in San Francisco. Mary is penitent, Mary is visited by the angel, Mary is pregnant, Mary gives birth—all in the same painting. The doors of the baptistery in Florence, The Gates of Paradise by Ghiberti, is another example. Each panel tells a story that has several parts. Panel 1 shows Adam and Eve, their creation, disobedience, and expulsion. This panel is famous for the creation-of-Eve “cosmic egg” design in the middle and for the tragic backward glance of Eve outside the gate of Eden. By telling visual stories, artists fold and unfold space, time, and form.

In Diebenkorn’s paintings, space, time, and form are folded like his folding chair; transported to another part of the canvas; and then unfolded as a way to support his ideas. Viewing his work is like being inside a tesseract that folds and unfolds as our attention is presented with new visual cues. Genius. Masterful. Diebenkorn invites us to unfold our chairs and sit awhile. It’s why his work works. The world that becomes evident is magical in the way it works. By the time the exhibit has been traversed, one’s mind and body have become comfortable with the expansive experience. I invite you to bring your own folding chair to this exhibit and experience how creativity is inspired and unfolds in Diebenkorn, the artist.