A review by Bill Carmel, MFA

The San Francisco Museum of Modern Art presents an extensive exhibition titled René Magritte: The Fifth Season, until October 28, 2018. All of the paintings date from the latter half of his life, 1943 until 1967. Among the more than 70 works contributed by major collections from all over the world, most are in the United States for the first time. These works represent a major synthesis of ideas that Magritte explores in his early work and is at the heart of his personal quest to understand the world in a way that differs from the historical and conventional ways of making art. This understanding takes the form of visual questions and insights that are similar to the thought experiments of philosophers, cosmologists, and physicists of the time. 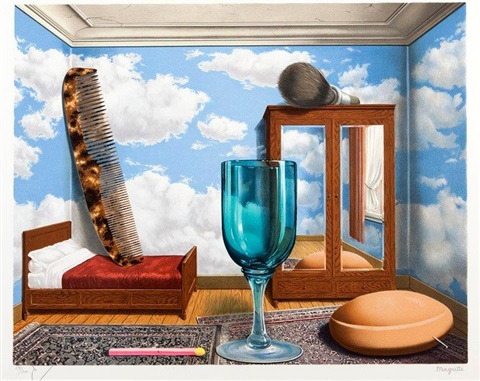 The first Magritte painting that rocked my world was titled The Treachery of Images (This is not a pipe). This small piece shows a simple, fine wood pipe and the words below it: “This is not a pipe.” Actually, it is gouache on paper which cleverly depicts the object we know from experience as an illusion. The rendering is so good that the image could produce smoke at any time. Why it doesn’t smoke is an enigma.

In the style of many of the world’s great thinkers from philosophers to scientists, Magritte poses questions, many that are contradictions without resolution. Like the famous thought experiments of philosophy (Heidegger’s question of Being), cosmology (Einstein’s question about twins and a spaceship), and quantum mechanics (Schrödinger’s question about the cat in the hatbox), Magritte presents similar questions of a visual nature. Heidegger questions the things and systems in the world from the point of view of their holistic and historical relationships to other things and systems rather than their anthropomorphic and utilitarian relationship to human beings.

In a similar way, Magritte presents us with illusions of things and environments that are counterintuitive and not normal, so that we think about how things exist in the world and how we discover relationships and systems of relationships before we think about the things’ utility or practicality. We tend to think about things in the world in terms of ourselves, such as how a tree can be made into houses, furniture, or other utilitarian objects. Magritte turns that kind of thinking inside out. For surrealists such as Magritte, things are not what they seem and they have an existence that is separate from us; existence isn’t always about serving us.

In the painting Personal Values, various “personal” utilitarian objects are placed in a room with cloud-filled papered walls. These objects include a bar of soap, mirrored wardrobe, wine glass, bed, comb, shaving brush, and match. The conundrum is that the comb, brush, soap, glass, and match are much larger in scale than the bed, wardrobe, and rugs. Items that serve the artist are rendered to be the size of the artist so they take the place of the artist in his bedroom. Relative size may indicate relative importance to the artist, but thinking about size in a different way reveals that these objects inhabit the space in the room in the way birds inhabit the sky. The skyscape opens the walls so that we experience the interior as if it’s an exterior, a conundrum inside an enigma. 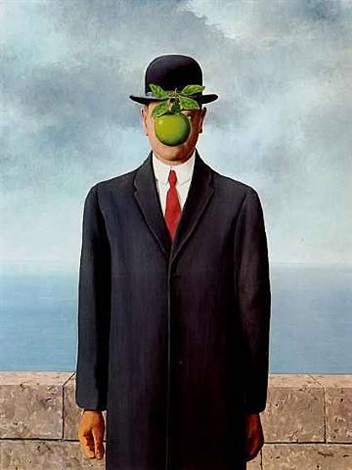 In the painting The Son of Man, a finely dressed man in an overcoat and a bowler hat stands in front of a waist-high stone wall. Beyond the wall lie a huge expanse of water and an overcast sky. A weightless green apple hides the man’s facial features, except for the left eye. About this self-portrait Magritte says, “At least it hides the face partly. Well, so you have the apparent face, the apple, hiding the visible but hidden, the face of the person. It’s something that happens constantly. Everything we see hides another thing, we always want to see what is hidden by what we see. There is an interest in that which is hidden and which the visible does not show us. This interest can take the form of a quite intense feeling, a sort of conflict, one might say, between the visible that is hidden and the visible that is present” (www.renemagritte.org).

The title may be a reference to Jewish and Christian texts that use the phrase “The Son of Man” many times in several contexts. Could the mystery of the apple hiding the face be that the apple is the source of knowledge about the world and that eating the apple expels Adam and Eve from the Garden of Eden? Is the apple a symbol for what defines us as human beings living outside Eden? When we use this knowledge, do we hide our true nature and separate ourselves from the world by building edifices such as stone walls? Or is it Newton’s apple? Many interpretations are possible.

Magritte loved painting the surface of objects with the images and textures of other objects, such as petrifying apples with the texture of stone, filling the outline of a sailing ship with the likeness of ocean waves, or outlining a daytime tranquil sky in the shape of a bird that flies in stormy weather (The Large Family). Much of Magritte’s work is about comparisons that are normally opposite in time, space, and substance. Many of these double-meaning forms may function as positive or negative space, where the outline functions as a cutout that reveals a view to another reality behind it.

These visual paradoxes also served as humorous comments on conventional art ideas and art historical images; irreverence wasn’t much appreciated outside the modernist art community. This audacious questioning of historical art values is typical of artists who are proposing shifts in our consciousness. Much of the mystery, the effect desired by these artists such as Magritte, is usually lost on viewers who expect familiar imagery and sensible compositions. However, Magritte’s astounding technical mastery in creating merged stylized figures, objects, and views that are smooth, detailed, and believable dampens such viewer objections. 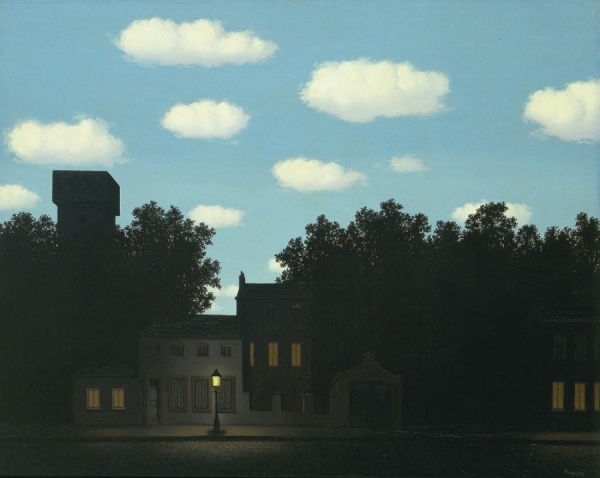 Artists throughout history present us with observations about the nature of things, the nature of ideas, and our perceptions of them. A few present us with questions about how we perceive things and why our perception influences our experiences. Pure abstraction as a way of making art began around the turn of the twentieth century. When imagery and compositions ceased to have reference to the “real” world, new ways of expressing time and space opened up. Modernist artists explored nonrepresentational kinds of form, space, and composition. Then in response to the horrific events surrounding the First World War, the Dada artists made a point of showing us the absurdity of events in life and the randomness of our relationship to things in the world.

The Surrealists who followed, during the 1920s, asked direct questions about our assumptions about things and events in our experience and confronted our perception by using illusions to make comparisons and contrasts that are impossible except as composite images. The similarity of these surreal compositions to dreams is intentional, as is presenting two or more familiar but opposite images as a new way of exploring relativity. The Empire of Light series presents views of night and day: We see familiar nighttime landscapes in the bottom half and familiar daylight skyscapes in the top half. Fusing these opposite visual images of day and night creates a new experience of time and space. This kind of delightful paradox is at the core of Magritte’s message, a call to experience relativity in visual terms.

Einstein explored a similar way of thinking about relativity (how time, space, and gravity interact) when he proposed the thought experiment about twins and a very fast rocket ship. Since gravity and acceleration are directly related and time and space are relative (not simultaneous), he concluded that the twin in the very fast rocket ship will age more slowly than the other twin who remained on earth: a paradox.
Both Magritte and Einstein show us that there will always be more to our perception of reality, including consciousness, than objective observation. What we see and feel is not necessarily truth and understanding. These cosmological and artistic thought experiments show us how thinking about relativity in these mysterious ways can inform our thinking about truth and sensation.

Magritte composed The Enchanted Domain as a series of paintings that became the basis for a mural that is 236 feet in circumference, commissioned for a circular room in the Grand Casino in Knokke, Belgium. SFMOMA presents five of the original eight smaller studies on a curved gallery wall. These paintings combine familiar images such as mermaids that become unfamiliar creatures with fish heads and human torsos. Other views show trees that have cabinet-like doors that open up to reveal landscapes or houses inside and other magical spaces. It is possible to visualize what it must be like to experience this great work in the round; it fuses many visual thought experiments into a circular format. Standing in the middle and pirouetting around might demonstrate the possibility of new ways to perceive truth and sensation and to experience mystery.

Magritte imagines doors and windows that are similar to physicist Erwin Schrödinger’s thought experiment. Schrödinger proposes that a cat, poison, a Geiger counter, radioactive material, and a hammer be sealed in a box. If the Geiger counter detects radiation, the hammer smashes the poison, killing the cat. Since radiation from the radioactive material is random, the cat could be dead or alive. Opening the box reveals the state of the cat. The enigma is that observation determines which version of the cat appears. Even though Schrödinger pokes fun at an interpretation of quantum mechanics that assumes that what is true for very small entities such as electrons and quarks holds true for very large things such as the cat, his example is instructive. In The Enchanted Domain VII, Magritte opens the door in the tree trunk to reveal what happens to the tree: The lumber becomes a house. The tree is both dead and alive, like Schrödinger’s cat. As an aside, Magritte makes a visual joke by showing the ax that cut down the tree imprisoned under a root of the tree. One woodcut deserves another.

After viewing the Magritte exhibit for a second time, I paused to take refuge on a bench because of an amazing array of amusing thoughts and reflections. Jean-Jacques Rousseau wrote, “The world of reality has its limits; the world of imagination is boundless.” Why does logic lead us to specific places and creativity lead us to an expansive, richer world? There are threads of pleasure and humor in Magritte’s art of paradox, enigma, and conundrum that resemble the revelations of cosmology, philosophy, and physics. These revelations celebrate the process of creativity and not the destination. Magritte shows us a universe that is based on the truth that nothing is absolute and that things exist in relationship to other things. If we follow Magritte’s lead, our fundamental understanding of the world will change. Go there!

Magritte’s art is neither nihilistic nor judgmental; he cares about life and how we live with each other. His art is filled with possibilities and challenges and has at its core mystery and humor. As the Seinfeld saying goes, “Yada yada yada.”

Many artists employ recurring themes, leitmotifs, etc., in their works. For example, the same four-note theme can be heard in Max Steiner’s scores for King Kong (1933) and The Big Sleep (1946). As a surrealist, Magritte infused his work with symbolic images, some of which appear again and again. We can’t necessarily decipher their meanings, such as that of the apple in front of Magritte’s self-portrait The Son of Man, his best-known painting. So often the symbolic meaning is left to the viewer to discern.

Here is a partial list of images and motifs that appear recurrently in Magritte’s works: