﻿ The Immersive Experience: Monet at the de Young, February 16 to May 27 | Art Space | John A. Barry And Bill Carmel | DanvilleSanRamon.com |
Include Photos | Include Comments | Print this page | Close Window

The Immersive Experience: Monet at the de Young, February 16 to May 27

Few artists have the opportunity to be the agents of change in the course of art history throughout their lifetimes. After years of struggle, Claude Monet (1840–1926) achieved great success financially, professionally, and personally as one of the original Impressionists. These artists burst onto the art scene in 1874, with their exhibition in Paris, as rejects from the Académie des Beaux Arts. Monet settled in Giverny in 1883, where he lived for the rest of his life. His life revolved around his family, his love of painting landscapes, and his passion for gardening. The gardens would evolve along with his art until he died. 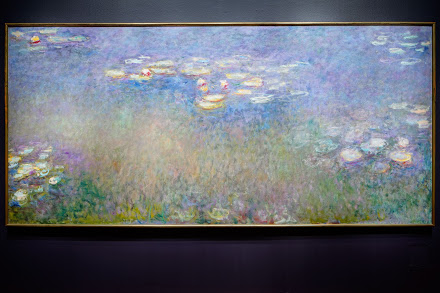 Monet’s paintings during these last years after the death of his second wife and eldest son are the subject of this exhibit. He achieved a degree of originality, along with other artists of the time, that continued to evolve. His personal style of Impressionism seems to have grown in a direction all its own, and the younger artists who saw his work took what they liked and built their own aesthetic visions that diverged into Expressionism (Gauguin), then into Fauvism (Matisse), and then into other modernist art movements such as Cubism (Picasso and Braque) that happened simultaneously and later. The color and bold brushstrokes of Turner and Constable influenced Monet, and Monet’s color and bold brushstrokes influenced others. Although Monet continued to expand his personal vision and style, it grew in a different way than what was popular. As he moved away from compositions that included recognizable images, the work did not sell. But as fortune would have it, he no longer needed to sell his paintings. 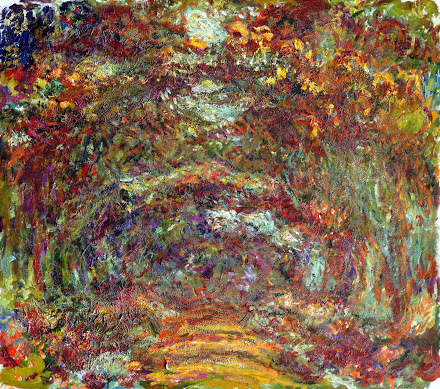 Path Under the Rose Arches

His painting during his last years was a logical extension of his personal style, which remained faithful to his love of nature—while the abstraction of other artists took mainstream art to other new and exciting aesthetic places. I wondered as I walked through the galleries whether Monet’s connection to the earth and botany through gardening informed the way he painted nature and vice versa. His brushstrokes became thicker and more energetic, the field of marks became more layered, and his vision became more expansive. The scale of his gardens and paintings increased over time. Monet gradually moved away from representing visual effects to suspending the viewer in an atmosphere of sublime color. It’s difficult for me to express this immersive quality of Monet’s work, but I think it is one of the most important qualities of this exhibition experience.

Sometimes we see life in things. Monet walked into the landscape, saw color in everything, and used it to make his painting come alive. He experienced the rhythms of the plants and the earth and translated these rhythms into the colors he used. He transformed the life in his garden into life in his paintings. For Monet, the essence of life grows and thrives in his art. Sometimes life and things converge in a process that comes alive in our minds. That moment when we feel as if this thing he made out of canvas and paint comes alive is the moment when our life becomes a garden. Fyodor Dostoevsky takes this relationship between art and life that we experience in Monet’s art a step further: “At first, art imitates life. Then life will imitate art. Then life will find its very existence from the arts.” Monet found his existence in art.

The periods covered by the paintings in the exhibit start with examples from the 1890s and include many water lily paintings and more large-scale floral studies. The next gallery contains the paintings completed after 1913. The gigantic mural-size canvases, measuring between 14 and 20 feet wide, truly envelope and engage the viewer. Many of the paintings that conclude the exhibit were created while Monet was suffering from cataracts. These paintings are highly gestural and colorful and closest to pure abstraction. 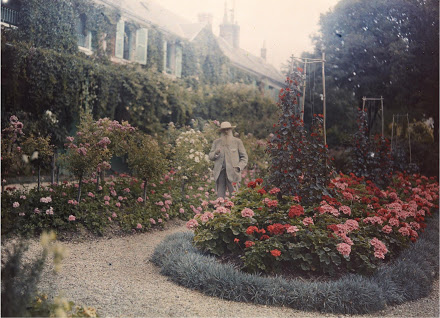 It’s difficult for me to see these paintings apart from the gardens. Monet’s palette of plants in the landscape was extensive. He composed in communion with nature. The gardens offered all kinds of different views with different effects, depending on the weather and the time of year. Moving sometimes gigantic canvases outside for plein air and inside for studio work allowed him a kind of freedom artists seldom experience.

Artists use ideas about life to make something more powerful to people than life itself. Art is powerful because artists refer to the idea of things rather than the things themselves. They refer to the idea of a thing as if it were alive, and in that conversation with viewers, there is an existential moment: We see life in the thing. In that moment, we see little bits of pigment move and suddenly find ourselves in that world of ideas and glimpse the spirit of who we really are. In his garden, Monet finds his rhythms and colors that activate the space of the canvas; his colors shimmer with the nature of things.

These paintings seem to build upon the ideas of Impressionism and anticipate Abstract Expressionist paintings (Helen Frankenthaler and Sam Francis) of the 1960s. In correspondence with other artists, Monet expressed his frustration with his process: “Color is my day-long obsession, joy, and torment.” He persisted nevertheless. 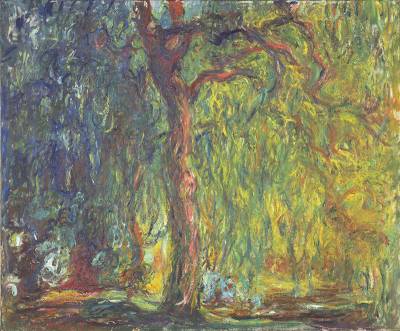 His gardens became the way he challenged and supported his painting. The original orchards and rows of pines disappeared, to be replaced by fields of color from annuals, perennials, fruit trees, and rare varietals. There was no overriding organization to the gardens; he planned asymmetries, curved perspectives, and areas of mixed plantings with related bold colors. He also developed water gardens, which played an important part in his compositions. As time went on, the horizon lines disappeared and specific references to flowers and other objects gave way to a liquid world of reflections and a magic space filled with the scent of wisteria and roses. Never did he abandon his commitment to observe nature closely. The process of establishing the gardens allowed Monet to nurture his mature professional growth and elevate his painting process toward the use of color as an end in itself, which I felt very strongly during my visit.

The landscape was a living work of art for Monet. He designed and planted the gardens in order to observe and paint them, composing and reworking them both on a grand scale. Monet never stopped thinking and dreaming about light, colors, flowers, water, and places from which to view them for the best effect. The subject of nature was always present with him, even when it dissolved into mist and the play of light and shadow. Always the colorist, he made the most of the relationship between his energetic marks of pure color that connect us with a special idea of life and re-create his legacy in this exhibition.