﻿ Rubens and O'Neill This Summer | Art Space | John A. Barry And Bill Carmel | DanvilleSanRamon.com |
Include Photos | Include Comments | Print this page | Close Window

Rubens and O'Neill This Summer

This installment of Art Space is a twofer. Bill Carmel writes about the largely unknown side of Rubens the artist: the diplomat. John Barry provides an overview of the 20th Eugene O’Neill festival, starting in August.

Creative Diplomacy in a World at War:
Peter Paul Rubens and the Quest for Peace

“I am a man of peace, and I flee quarrels and lawsuits like the plague; I hold that an honest man’s desire ought to be above all to enjoy perfect tranquility of mind in public as in private life, performing all the services he can, without injuring anyone.” – Peter Paul Rubens

The Fine Arts Museums of San Francisco, Legion of Honor Museum, has an astounding exhibition titled “Early Rubens” on display until September 9, 2019. In cooperation with lending institutions and donors too numerous to mention here, it includes the works of Peter Paul Rubens (1577–1640) that span the period from 1608 through 1620, a period of spectacular professional growth and achievement for the artist. Not only were the creative productions of his workshop collected and commissioned internationally but also admired were his skills as a businessman, intellectual prowess as a scholar, social adeptness with everyone from monarchs to tradesmen, and preeminent mastery of a style of art that came to epitomize the Baroque.

During his lifetime of travel to the courts of Italy, Spain, France, England, Germany, and his native Netherlands (United Provinces) as a diplomat representing the rulers of these states, Rubens helped broker two major treaties: The Treaty of Antwerp ushered in the Twelve Years’ Truce in 1609, and in 1630 he witnessed the signature of the Anglo-Spanish accord, in which England renounced its support for the rebels of the Spanish Netherlands and the Protestants of Germany. The latter document was a giant step toward reconciliation of the conflicts between Spain and the Dutch provinces. With the Treaty of Münster (1648), the Dutch won their independence from Madrid and both the Eight and Thirty Years Wars came to an end in the same year. This event was memorialized with the treaty called the Peace of Westphalia.

Earlier in his career, Rubens returned to his home in Antwerp after successful diplomatic and artistic visits to Italy and Spain. Two years later, he married Isabella Brant. 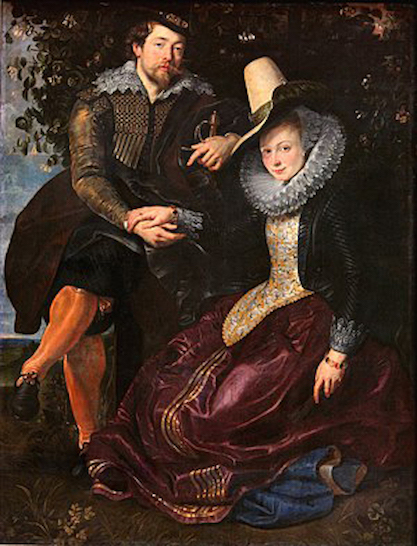 In Rubens’ depiction of his marriage, the gentleness and affinity between him and his bride are self-evident. In sharp contrast to this, in other works, he bore witness to the horror contained in the contemporary euphemism “collateral damage” visited on innocent civilians wherever war is waged. His painting Massacre of the Innocents is a veiled allegory about how Protestants and Catholics prosecuted their differences by waging religious wars. Rubens was aware of these events before and during the time he spent touring Italy and Spain. These conflicts devastated the Low Countries, what is now Belgium and Holland. As the emissary to the Hapsburg Archdukes of Brussels, he helped negotiate the Twelve Years’ Truce and brought stability and a degree of religious tolerance to the region. 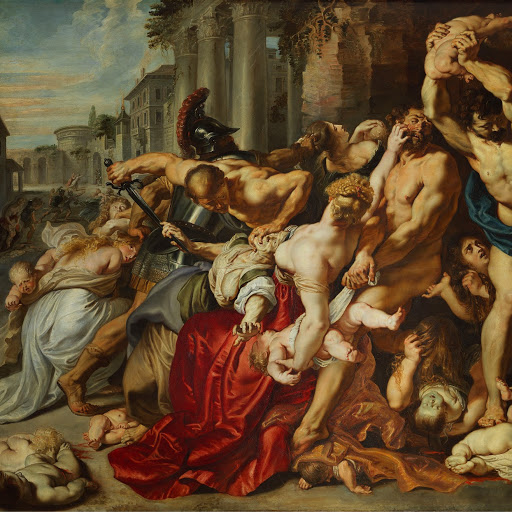 Rubens understood that wealth and prosperity were sustainable in a country free of wars between colonial empires and their religious intolerances. With a humanist education as his base, he knew that economies free of conflict could thrive and that the general population could achieve the best life possible. He was able to achieve economic success in his profession as an artist/entrepreneur, because of people’s admiration of his painterly and personable bravura style. He presented himself as deferential without being obsequious. He was discreet while also being intellectually conversant during his private portraiture and interior “mural” painting sessions for the monarchs and political leaders of Europe. In addition, his success as a diplomat could have been the result of these personal and artistic attributes that were so professionally and politically effective.

He sought the kind of peace in his time that would bring prosperity and happiness to the greatest number of people. The massive financial engine and extensive network of trade developed by the population of the Netherlands were at once a thorn and also a golden magnet to other, more powerful adversaries in the European empires.

Rubens understood how the court of one empire pitted the others against each other by fighting in the Netherlands. This fighting blocked the Dutch from making profits that arose from trading with the other empires’ colonies. The Dutch were unable to benefit from their reliable and profitable stream of resources and revenue. Religious intolerance may have been the deflecting excuse given for waging war in the Netherlands, but war raged on with greater fury soon after Martin Luther nailed his 95 theses to the Wittenberg Castle Church door, in 1517. The theses’ message of Catholic abuses and reform was taken up in protest throughout northern Europe and beyond and provided the Catholic church with a reason to fight the Protestant resistance wherever it occurred through its proxy of devout courts, especially in the Netherlands. 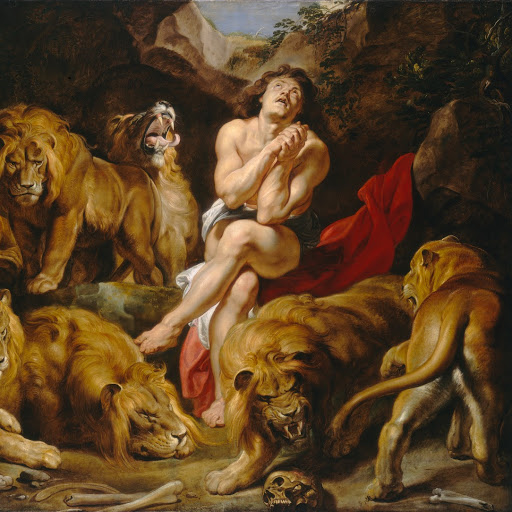 Rubens’ "Daniel in the Lions' Den," c. 1614/1616
Oil on canvas, Ailsa Mellon Bruce Fund, National Gallery of Art, Washington DC
This canvas is huge, 7 X 11 feet. It is not difficult to imagine that Rubens could have felt like Daniel when in the courts of European aristocrats. There was an attitude among the courtiers that people not born of nobility, who earned a livelihood, by art or trade, with their hands, were not welcomed as equals in the courts.

Opulence and demonstration of wealth have been used for currying favor and disarming potential rivals. Even now, our embassies and diplomats use art as a means to appease and influence those in power. Rubens used this understanding of human nature to his advantage, as have other artists both past and present. In addition to his appointments as court painter by the Duke Gonzaga of Mantua; Cardinale Infante Ferdinand of Austria; Philip III of Spain; Albert VII Archduke of Austria; Marie de Medici, queen mother of France; and Louis XIII, he was knighted by Philip IV of Spain and Charles I of England. These regal folks collected and promoted Rubens, because his art reflected their own world view of themselves. They considered themselves the opulent, vital, colorful, virile, righteous, and aggrandizing leaders of their world.

That being said, I look at the art of Rubens and the letters he wrote as conveying a world view that was inclusive, metaphoric, fluid, complex, and grand. His genius could be expressed in many ways, and it always served his country and himself. Even though his grandiosity was expressed more than I prefer, I admire his ability to observe closely and in ways that reflected his intuition and understanding of the world of things and people.

Many contemporary artists and patrons for the past few hundred years have looked at his work and judged it to be over the top, which may be why he has fallen from the grace of his time. For all this time, the aesthetic cultural norms regarding the human body have been the opposite of the ample and dynamic naked bodies Rubens painted. (These ample bodies resulted in the term Rubensque, which entered the lexicon in the mid-19th century.) The fashion and advertising industries have proposed a slim, tight physique as the aesthetic norm our culture defines as desirable. In spite of his excesses, he never abandoned his grounding in humanism, which informed his art, his Catholicism, his intellect, and his devotion to his family.

The portrait of Philippe, the artist’s brother, is an example of this humanism. More than in other portraits Rubens painted at this time, the loose brush and the swirling, somber brown-grays that surround the healthy flesh tones of the face belie a warm life force just below the surface. This man is alive in the mind of Peter Paul Rubens, and the bravura of his brushes and paint speak directly to this life. This is a masterpiece of understatement, in contrast to the swirling overstatement of activity and detail that surround the faces Rubens paints in his historical, religious, and mythological scenes. These faces appear just as alive as Philippe’s; it’s the context that is different. 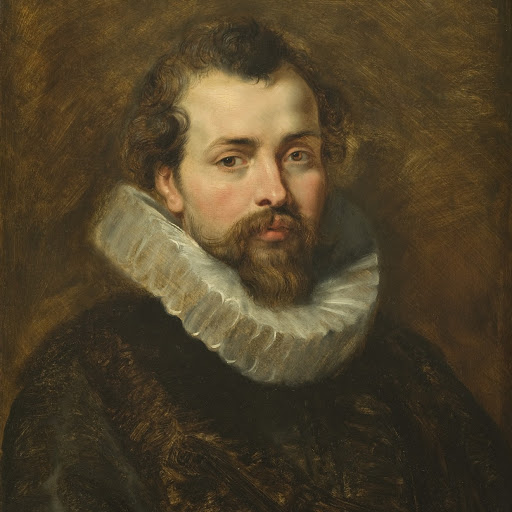 I get the sense that the art of Rubens—the close observation, the profound sense of unity in the work—informed his diplomacy. I wonder if this sensibility, this kind of observation and synthesis of humanistic ideals could make a difference in our current practice and application of politics and diplomacy. Could the effectiveness Rubens experienced as he carried the messages of world leaders to each other be at least in part due to his artistic practice? Could our world leaders and their diplomats benefit from training in the arts? I think they could. I also think that close observation and the attributes of working artists can be taught and that their application to the practice of most professions could be beneficial and effective.

How many other artists besides Rubens have lived as effective and productive a life as a diplomat? I’ve heard of artists who were spies and effective as wartime covert agents, but applying creative thinking to human interaction and working for peace and justice is how Rubens can be most instructive. His understanding of human nature is written in his portraits and his letters. Perhaps we can use that information to great advantage between nations of the world.

Over the years as a teacher of art, I’ve had doctors, research scientists, law enforcement personnel, environmentalists, writers, pilots, and theologians—among others—tell me that taking art courses has helped them become better professionals in their field. Instruction and practice in visual thinking help them observe the world in different ways. Recognizing microexpressions in human faces, for example, might mean better detectives, therapists, and doctors. Maybe better ways of observing the world could help people in public service as well. Is it possible that a program of visual arts study could have direct and effective application for people in social sciences and public service occupations?

Maybe it’s time to bring Rubens and his art practice to the diplomatic corps and help change the trajectory of the world so that it works for the greater good of all people, not only for the wealthy and privileged. Rubens made that happen, so he opens the doors of possibility for all who engage with the arts.

2019 brings to Danville and environs the 20th annual Eugene O’Neill Festival, August 24–September 29. America’s greatest playwright was a resident of Danville from 1937 to 1944, and his residence, Tao House, still stands in the Danville hills.

That venue will be the site of the production of O’Neill’s greatest play, Long Day’s Journey Into Night, during the Festival. Journey is a thinly veiled exploration of the ghosts and demons that haunted the playwright and his family, here represented by the Tyrone clan.

Another renowned playwright who exorcised some of his demons through drama was Tennessee Williams. This dramatist’s work The Glass Menagerie will also be on display during the Festival at the Village Theatre. “Haunted Poets” is the theme of the O’Neill/ Williams poetical nexus.

Complementing these two dramatic masterpieces will be a presentation of The Second Girl, by Ronan Noone, which examines the lives of three Irish immigrant servants to Long Day’s Tyrone family. This play will be presented as a script-in-hand reading at The Museum of the San Ramon Valley.