This is the fourth and final post on buses, at least for a while, following posts on long-haul buses, local buses, and electric buses.

Stanford’s Marguerite is going electric. Well, they’ve been going electric since 2013, when they were among the earliest adopters of electric buses in the US. Since then, Stanford has acquired 41 electric buses, almost two-thirds of their fleet of 66. They plan to be fully electric in the next three years after purchasing 30 more buses. 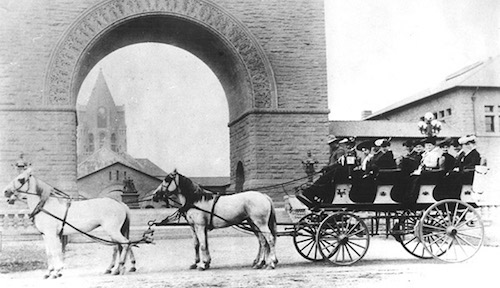 Then: Marguerite in the 1890’s (courtesy Stanford University Archives) 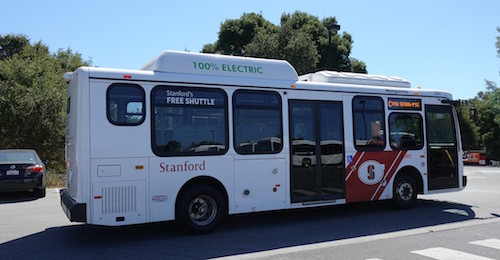 And now: One of the newer electric Marguerites humming by

It seems so easy, right? Not so fast. I give Stanford a lot of credit for hanging in there with this vision.

I spoke with Brian Jackson, the Transportation Operations Manager at Stanford who has overseen the operation and development of the Marguerite since 2016. As he pointed out, Stanford has an ideal situation for electric shuttles. The weather is temperate, the terrain is flat, and the shuttles operate primarily during commute hours, so there is plenty of time to recharge. He described a “day in the life” of a typical shuttle as operating between 5:30-9:30am, then taking a break to charge in the on-campus lot, then going out again from 3:30-7:30pm. A few shuttles run during the day as well, but the fleet is primarily active mornings and evenings. You can see many of the buses plugged in during the day in their lot off of Oak Road. 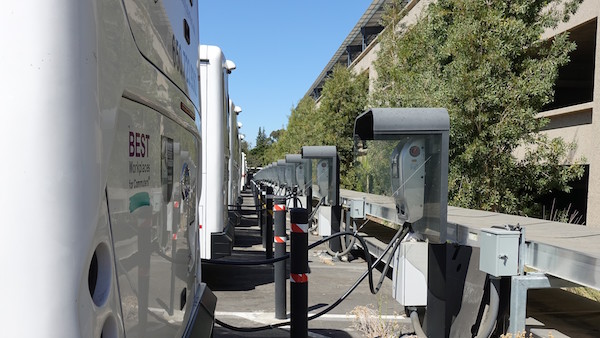 Despite the ideal circumstances, it’s been a rocky few years. As Mr. Jackson describes it, there have been a variety of issues with the buses, including HVAC systems that needed to be replaced and door interlocks that weren’t functioning properly. A driver I spoke to, who has been driving these since they first arrived, mentioned things as mundane as side mirrors not working properly, or a turn signal lever too close to a door opener. The buses, as Mr. Jackson put it, could be “quirky”. These problems were complicated by the fact that the buses are made overseas. So when a code is displayed, or something as simple as the fire extinguisher has problems, the explanatory text (in another language) is not readily helpful.

Mr. Jackson said a critical thing for them has been having personnel from the bus manufacturer on site to help troubleshoot. The Marguerite team has an engineer and a mechanic from the vendor on call to help them resolve issues, as well as a set of its own mechanics, who generally deal with things like tires and wipers. The electric buses are a very different beast from diesel, and an engineering background and training are particularly important for working on them. (1) Without adequate help and/or commitment to an electric fleet, several other pilots have failed, with cities reverting to diesel. Stanford was able to work through these issues and pursue its vision of electrifying its on-campus shuttle.

At this point, Mr. Jackson believes the buses are “as reliable as diesel”. And they are cheaper to operate, with lower-cost power and fewer day-to-day maintenance issues. For example, there is no transmission, so no transmission fluid. No engine, so no oil. “No leaks!” exclaimed the drivers I spoke to, in tandem. And the buses are much cleaner. One of the drivers was very happy to be driving a bus that didn’t smell of fuel, that was smooth to drive, that was quiet for passengers, and was clean for the environment. He prefers these buses to the diesel ones, despite the rocky road to get here.

How do the passengers feel about the new buses? Mr. Jackson said many mostly notice that they are newer. You can see the nice interior here: 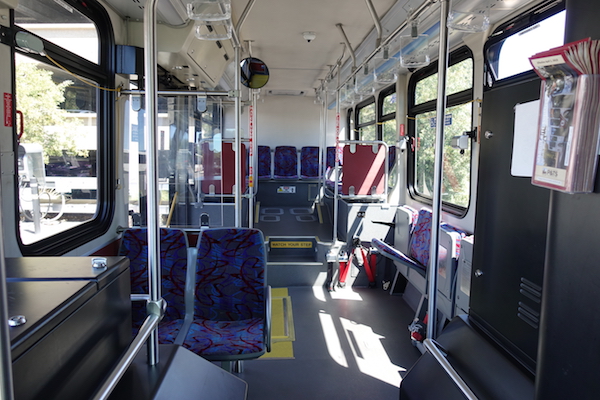 You may be wondering where the power comes from for these electric buses. If so, that is a terrific question! Stanford uses a combination of behind-the-meter solar (they have 5MW of solar panels), solar power purchase agreements (they own a solar plant in Rosamond that generates 67 MW), and thermal storage (they operate the equivalent of 10MW of electricity storage in a hot-and-cold water system) to achieve 70% carbon-free electricity. Stanford spokesperson Ernest Miranda says the combination of solar and storage is fairly contemporaneous with 70% of their use, since much of their power use is during the day. In early 2022 they are bringing a new 88MW solar plant online in Lemoore to help offset their nighttime use and get closer to 100%. They will continue to evaluate storage and flexible demand options to help them match power generation and consumption in real-time. (2)

With 2.86 million passengers riding the Marguerite each year (3), Stanford is essentially converting millions of gas-powered miles to emission-free miles. In the chart below, Stanford has been moving many of the light red miles ("Driving Commuters") to dark blue miles ("Stanford-owned Vehicles"), while also shrinking those dark blue emissions. 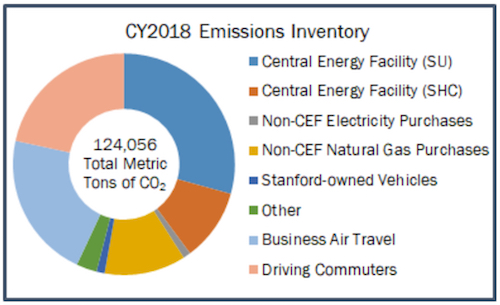 Stanford’s emissions inventory, from this fact sheet on scope 3 emissions

I asked Mr. Jackson, who has been working on commute transportation for well over a decade, for his advice for other bus companies thinking of going electric. His top tip: Ensure that the bus provider is committed to your success and will supply on-site support as needed. “Not a lot of people know how to fix these buses.” Those are words of wisdom that I expect we will be hearing more of as we upgrade to cleaner tech in many domains.

1. I was talking with my mechanic the other day, and he mentioned how hard it is to find technicians. He said these days a lot of engineering skill is needed, and kids with those skills can get better-paid jobs in cleaner environments. Mr. Jackson echoed this, saying when you find good mechanics, you need to make it a priority to keep them happy.

2. You can find some of this information here. I hope to cover Stanford’s innovative thermal storage system in a future blog post. It has been instrumental in reducing their emissions for heating and cooling, and has also helped them save water. As with the electric shuttles, it hasn’t been without its trials, including cooling curtailments this past summer. It takes some commitment and “can-do” attitude to be among the pioneers. I love seeing that.

3. Stanford has some useful data on its sustainable transportation page.

I hope that your contributions will be an important part of this blog. To keep the discussion productive, please adhere to these guidelines, or your comment may be moderated:
- Avoid disrespectful, disparaging, snide, angry, or ad hominem comments.
- Stay fact-based, and provide references (esp links) as helpful.
- Stay on topic.
- In general, maintain this as a welcoming space for all readers.