﻿ Disposing of Disposables | A New Shade of Green | Sherry Listgarten | DanvilleSanRamon.com |
Include Photos | Include Comments | Print this page | Close Window

Several comments on previous posts in this blog have pointed out that it wasn’t too long ago that we were much more accustomed to reusing things. For example: “I remember my mother darning socks, mending tears, turning collars on my Dad's shirt -- in fact he bought shirts which came with a spare collar for when the first was frayed.” Only in the last few decades have we become so accustomed to disposables and single-use items. We need to turn back the clock on this and re-establish earlier norms for the next generation. One simple thing we can all do is eliminate disposables at our parties, and most importantly parties with kids and teens.

The City of Palo Alto offers “Zero Waste party packs” to help with that. (If you don’t live in Palo Alto, read on, because you can set this up in your own city.) A “party pack” is a set of 24 place settings -- plates, bowls, cups, napkins, and utensils -- that is intended to be borrowed, cleaned, and returned. In Palo Alto, there are about two dozen of these made available by “Zero Waste Block Leaders” (ZWBL’s) serving neighborhoods across the city.

The program was first piloted about ten years ago in Barron Park, and was officially started in 2012. Wendy Hediger, Environmental Specialist with the City of Palo Alto’s Zero Waste Group, explains that the goal is to change mindsets. “We are trying to move people up a level on the reduce/reuse/recycle continuum.” She points to the City’s goal to achieve 90% diversion of waste by 2021, noting that “we cannot simply recycle and compost our way to Zero Waste”. (1) 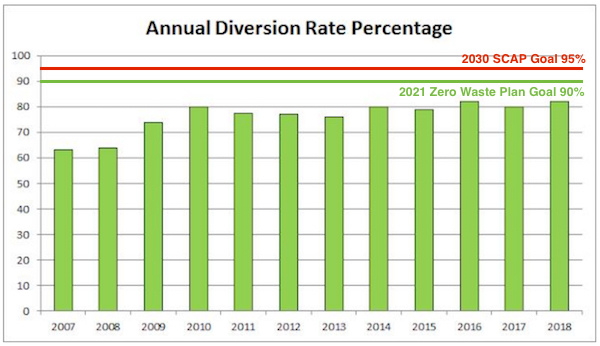 Rani Jayakumar, a ZWBL in Midtown who has been involved since the pilot program, has noticed that usage is really starting to take off. “This year, something has changed. They are much more widely adopted.” Karen Saxena, a ZWBL in the Barron Park neighborhood, agrees. “I actually had a queue this past summer. I had to remind people to bring them back by a certain time because someone else was coming to pick it up.” In response, Hediger has purchased a few more party packs to be made available this coming year. “We’re so busy, we have had to turn people away.”

The dishware in the party packs is made by Preserve Products out of 100% recycled #5 polypropylene plastic. Utensils are metal, and napkins are generally a washable cotton that doesn’t need ironing. 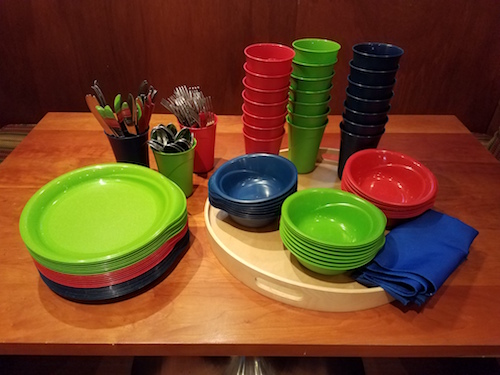 A 24-serving party pack (minus most of the napkins)

Residents use the party packs for everything from parties in their homes and yards to bigger picnics, school outings, block parties, church functions, even weddings. ZWBL Shannon McEntee of Evergreen Park says people really like them, and are “as enthusiastic on returning them as on borrowing them.” Many of the block leaders are acquiring more regular “customers”. And as ZWBL Vickie Martin observes “The more they get used, the more other people are exposed to them.” Around 20,000 people have used one to date. 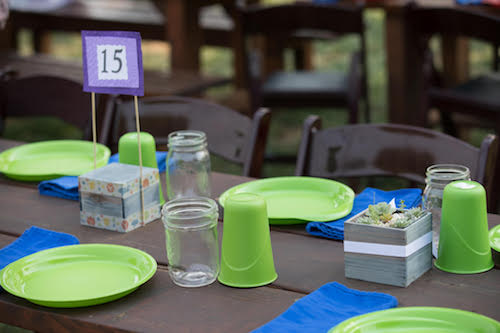 Loss remains an issue, though it has decreased over time. McEntee laments “We are so used to throwing things away.” Hosts need to take steps to prevent loss. The ZWBLs suggest arranging the waste bins thoughtfully, posting signs nearby, and making an announcement in advance. They have seen that napkins and utensils (especially forks) more often go missing, so designated bins for these are important. The packs cost about $275 each, with the City spending about $6000 on the originals and about $1700 on replacements. Hediger views that as a good investment in helping residents adopt new behaviors. 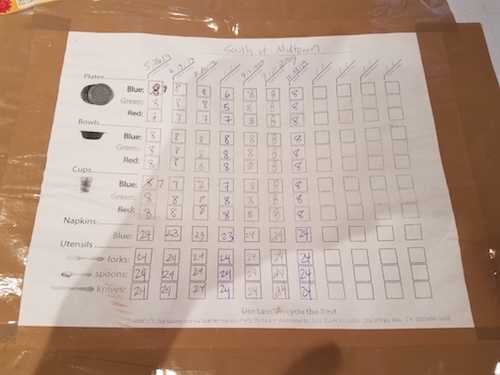 Party pack bins will often have a checklist like this for reporting lost items.

ZWBL Pamela Chesavage says people who use the packs are “very diligent about washing and reorganizing, marking what’s missing”, but larger events can be difficult. Jayakumar once borrowed fourteen (!) packs for an elementary school event, and even with people monitoring the trash bins, some loss occurred. Nowadays many schools have their own party packs, and some classrooms keep their own in case of severe allergies. Volunteers offer to take home and wash the dishes after the events, and the kids all experience a new way of doing things. Carla Matlin, a ZWBL in Miranda Green notes that “It takes some time to change habits.” Starting early with the kids is key, normalizing sustainable habits when they are young. 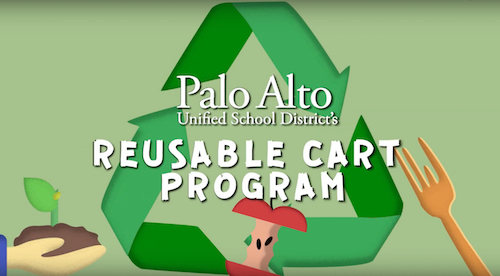 Along those same lines, Hediger is really happy with a program across all of the elementary schools to switch to reusable utensils, clamshells, and trays for school lunches. Laurie Shea, an instructional aid at Walter Hays Elementary, notes “The trash has been limited immensely.” Parent Joslyn Leve says “They are learning that our resources are limited. They are learning that you don’t just take something and throw it away after use.”

The Zero Waste party packs are generally popular and easy to use, but the hosts do get occasional feedback on how to improve them. Some customers would like something fancier or more resistant to sharp knives. The City looked into using Corel, but it was more expensive as well as heavier. Some residents have asked for smaller plates, or smaller cups, or table cloths, and Hediger continues to look at how best to evolve the party packs. In the meantime, Chesavage, who does some party planning on the side, recommends people use white fabric tablecloths, which look great, are reusable, and are very easy to clean with bleach. 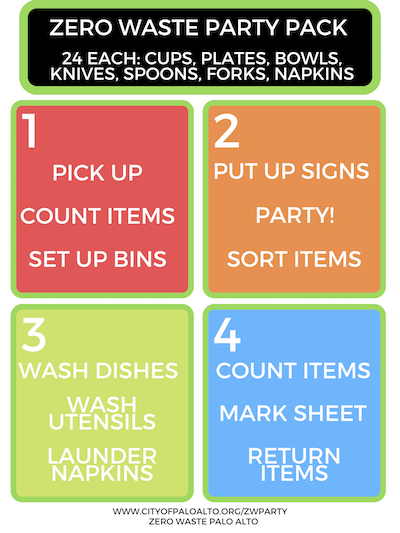 This “how to use” primer comes with the party packs

The biggest waste issue that Chesavage sees at parties is leftover food. She strongly encourages hosts to try to “right size” the amount of food they offer, and to have a plan for what to do with leftovers. Chesavage suggests providing take-home boxes for the guests and bringing full trays to a place like Ecumenical Hunger, after first calling ahead. She also has some experience with an app called Olio, which is like freecycling for food. You post a picture of extra food you have available and people can come by to pick it up.

Palo Alto’s Hediger notes that there are many ways people can reduce their use of disposables. She cites the recent Halloween costume swap as a good example, and also sees ways that people might share more tools, for example, through Nextdoor or other neighborhood connections. Matlin says that changes take time, but they do happen, highlighting how many people now bring their own grocery bags to stores and compost their food waste, while that wasn’t the case just a few years ago. The Zero Waste Block Leaders are enthusiastic about the response they are seeing to the party packs, and are encouraged for the future. Chesavage says she is “just thankful that these exist”. Matlin volunteered in order to be “more involved in local community, and be more mindful of how we use our resources,” and is glad to be able to help others do the same.

When you next find yourself looking at buying a stack of disposable plates or cups, think if you might instead use a Zero Waste party pack. Palo Alto offers more information about zero-waste party planning here.

Notes and References
1. The city is moving to a more intuitive metric, pounds of waste per person per day, as shown here, but I don’t believe goals have been set yet for this metric. 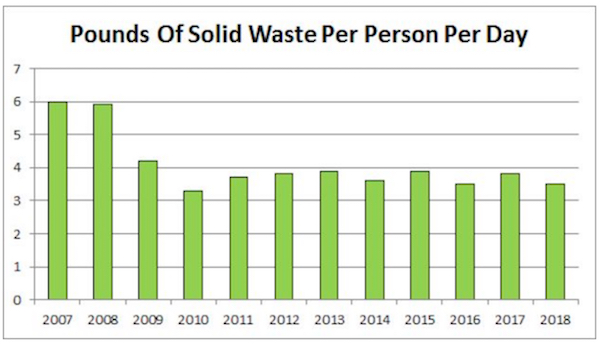 Current Climate Data (September/October 2019)
This was the warmest global September ever measured (140 years of measurements), and second warmest year-to-date (January - September) ever.

Comment Guidelines
I hope that your contributions will be an important part of this blog. To keep the discussion productive, please adhere to these guidelines, or your comment may be moderated:
- Avoid disrespectful, disparaging, snide, angry, or ad hominem comments.
- Stay fact-based and refer to reputable sources.
- Stay on topic.
- In general, maintain this as a welcoming space for all readers.