The biggest emission sources for people in our area, besides those from general consumption, are: transportation (car and plane), food (diet and waste), and heating (space and water). One thing I struggle with is finding cheap/easy fixes for space heating. A colleague told me she recently priced two ductless heat pumps for four rooms in her Palo Alto home and the bid was a sky-high $14,000. She will pass! My own house has new-enough radiant heat powered by an efficient (for gas) furnace, and it’s working just fine. So how to reduce our heating emissions?

The house and roof are well insulated, so beyond adjusting the thermostat, I didn’t have many ideas. A year or so ago I had Palo Alto’s Home Efficiency Genie come by, a visit that I’ll cover in more detail some time next year. One thing the building analyst noticed is that one of the two fireplaces in the house had a draft even with a closed damper. The chimney he identified has the original equipment, so that made sense. He mentioned that a fix that doesn’t cost too much is a chimney plug. I installed one recently and it was easy and seems like it will work, so I thought I’d do a quick blog post on it in case others are interested. And if you install one soon, it might provide a cushy landing for Santa!

The chimney plug I got is an inflatable one of dark black plastic, but they also have some made of other materials. You can look online for “chimney plug” or “fireplace plug” or similar. The one I ordered came like this and is very lightweight: 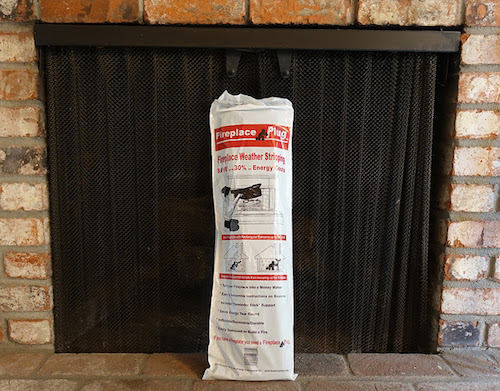 Before you order one, it helps to know what your flue looks like. How big is it, and is there anything protruding into it that you will need to work around? Our chimney flue looks like this; you can see the damper latch that the plug needs to get around. 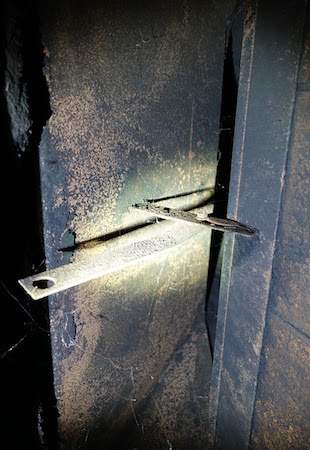 The chimney plug comes with slots to accommodate latches like that, as shown on the package. 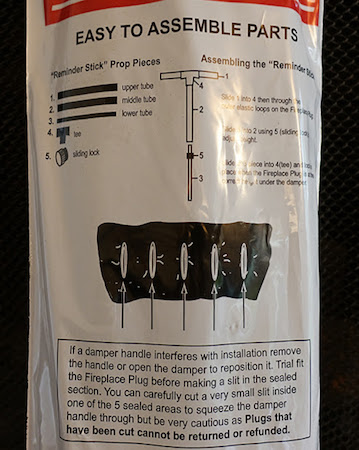 When you empty the package, the contents are simple: 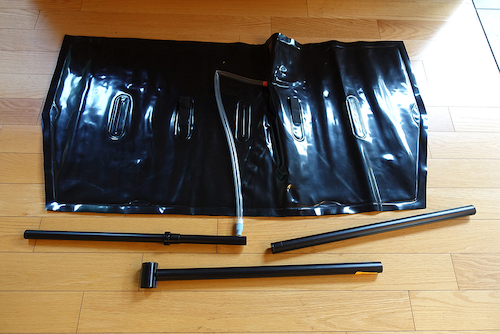 It takes about a minute to put the handle together and strap it into the elastic bands on the uninflated plug. 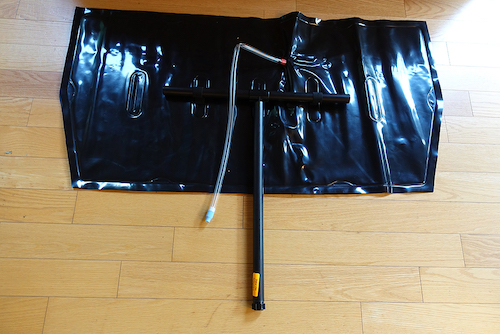 You blow the plug up partway before putting it into the flue. 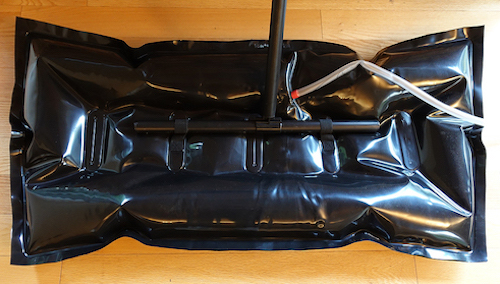 You can see below where I cut a slit for the latch handle that juts out in the center of the flue.

You insert the plug into the flue in a V shape, pushing the back up first and then the front, leaving the blow tube hanging down by the fireplace opening so you can blow it up the rest of the way. Here is what it looks like after it is blown up. This photo is taken looking up the chimney from where the logs are. You can see the metal latch handle poking out of the plug below the black plastic handle. 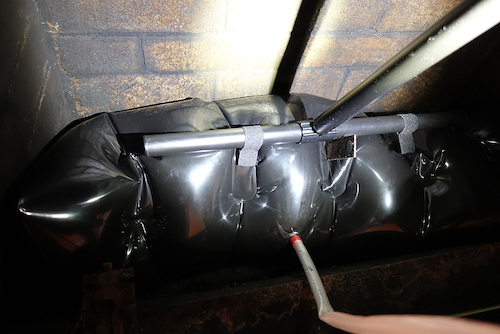 After tucking the blow tube up and away, it looks like this from the front of the fireplace. The label says “CAUTION NO FIRE”, and the handle is an adjustable length. 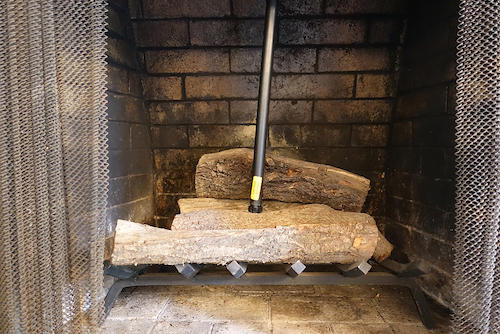 You can remove the plug when needed to light a fire. We don’t use this fireplace, so I expect the plug to be there for a long time. I’m glad the handle has an easily understandable message!

Some of you may be wondering how much money this will save in electric bills and/or how many emissions it will save, compared with the cost to purchase it or the emissions emitted to make and ship it. I don’t know the emissions needed for manufacturing, and the end comparisons depend on the degree of the draft. Financially, if you spend an average of $60/month for six months on space heating, you need to save 5% of your heating bill during those months to come out even after 4 years. Those of you who can rig something up yourselves with scraps of batting and/or foam would do better.

I have a few other inexpensive ideas for saving on space heating that I’ll cover when I do the Home Genie blog post. But I’d love to hear any you have, as we are getting into colder weather.

Ed note: Some terminology in this blog was updated due to an unwitting trademark infringement.

Local News: Six of the candidates for California Senate District 13 (that's us) will be discussing climate change and the environment for 2+ hours on Wednesday, January 15 at Menlo-Atherton High School. Interested in local policies? Register here (it's free).

A new study shows we may be seeing a dangerous warming feedback loop or “tipping point” in the Arctic. “”Thawing permafrost throughout the Arctic could be releasing an estimated 300-600 million tons of net carbon per year to the atmosphere,” the NOAA writes in the report. That’s roughly the equivalent of Japan’s annual emissions. And those emissions are going to increase (as the planet keeps warming).”

Comment Guidelines
I hope that your contributions will be an important part of this blog. To keep the discussion productive, please adhere to these guidelines, or your comment may be moderated:
- Avoid disrespectful, disparaging, snide, angry, or ad hominem comments.
- Stay fact-based and refer to reputable sources.
- Stay on topic.
- In general, maintain this as a welcoming space for all readers.