﻿ The Art of Newspeak | Art Space | John A. Barry And Bill Carmel | DanvilleSanRamon.com |
Include Photos | Include Comments | Print this page | Close Window

The Art of Newspeak

Eric Blair (better known as George Orwell) was a prescient literary artist. Orwell famously predicted that “Big Brother is watching you.” And indeed he is. But increasingly, Big Tech is supplanting Big Government as the supersized surveilling sibling. So Orwell had it right for the period in which he wrote until entities such as Facebook were spawned.

This British writer made this prescient prognostication in his famous 1984, in which the aforementioned bad bro decreed to the downtrodden slaves of Oceania “War is peace. Freedom is slavery. Ignorance is strength.” Newspeak is what Orwell labeled it in his novel and restated in his essay Politics and the English Language: “Political language is designed to make lies sound truthful and murder respectable, and to give an appearance of solidity to pure wind.”

The Oxford English Dictionary defines Newspeak charitably as “ambiguous euphemistic language used chiefly in political propaganda.” From the Vietnam era, for example: “collateral damage” (noncombatants killed in bombing, etc.) and “pacification” (killing people to keep them from fighting). Plenty of others floating around today, what with meme propagation and other sources of disinformation.

But you needn’t look to Washington or Silicon Valley for examples of Newspeak. They’re currently right in front of your eyes—in the form of the hundreds of “Yes on Open Space” placards littering the local landscape. Pure Newspeak. Magee Ranch, which Davidon Homes hopes to ravage, is currently open space not covered by development. The concept of Davidon—funder of the forests of Newspeak that have sprouted like weeds everywhere—is to bulldoze this currently uncovered space and build 69 closely clustered houses in part of the formerly open area. One definition of open is “exposed to the air or view; not covered.” As in not covered by a housing development.

This Orwellian sham—facilitated by the Danville Town Council, which slithered around existing zoning laws in order to greenlight the project—will be on the March ballot in the form of Measure Y. Y for “yes,” get it? A yes vote means that Orwellianism prevails. A no means that the land actually remains uncovered with terrain-altering buildings. 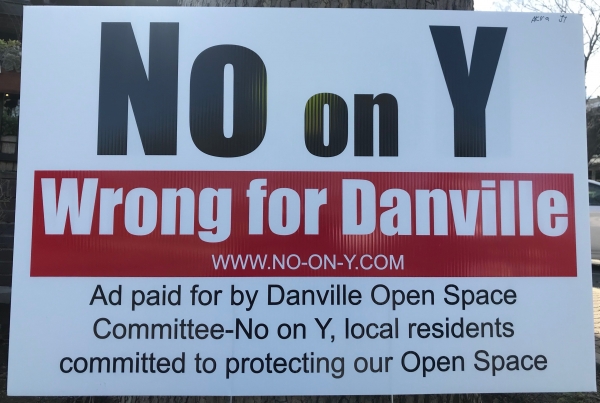 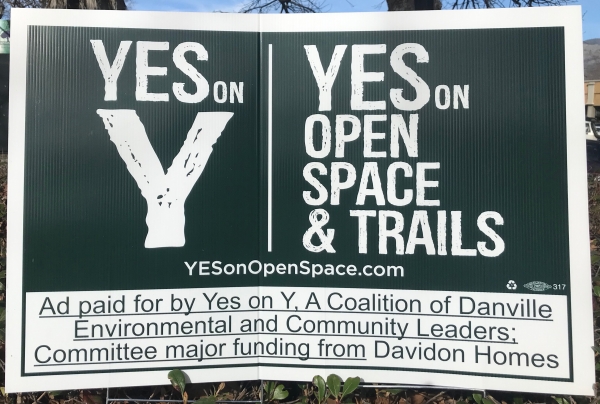 From the town’s public information officer:

We've received notification from residents that they received a call or text inviting them to an online “town hall” this evening to discuss the upcoming Measure Y. Measure Y will be on the ballot on March 3, 2020 in regard to a development application by Davidon Homes for a project called, "Magee Preserve." We would like to explain that the event being discussed is not Town sponsored or co-sponsored. It is entirely being put on by the Yes on Y campaign, and does not use town funding, equipment, or locations. It is an entirely separate entity. The messaging mentions that Mayor Karen Stepper take part in the online meeting this evening. Mayor Stepper has chosen to participate in this discussion solely as a private citizen, and does not represent either the Town Council or the Town of Danville.