﻿ Is Offshore Wind a Reliable Renewable? | A New Shade of Green | Sherry Listgarten | DanvilleSanRamon.com |
Include Photos | Include Comments | Print this page | Close Window

Is Offshore Wind a Reliable Renewable?

One of the big knocks against renewable resources is their intermittency. The sun doesn’t always shine, the wind doesn’t always blow. One way to see this is by looking at the “capacity factor” of solar plants and wind farms.

When you hear about renewable plants being built, you normally hear about the size of the plant in megawatts (MW). For example, our local power providers are building 100 and 200 MW solar plants, and Mountain View’s Googleplex gets power from the ~600 MW Altamont Pass Wind Farm. Those numbers reflect how much power the plant can generate at peak. If you multiply that power by time, you get a measure of the maximum amount of energy it can generate over a period of time. So, for example, if you were to run a 100 MW solar plant at full power for a year (that would be impossible because of night and clouds, but just pretend), then it would generate 100 * 365 * 24 = 876,000 MW-hours = 876 GW-hours (GWh) of energy.

The chart below shows the capacity factors of different types of energy in the US. (2) 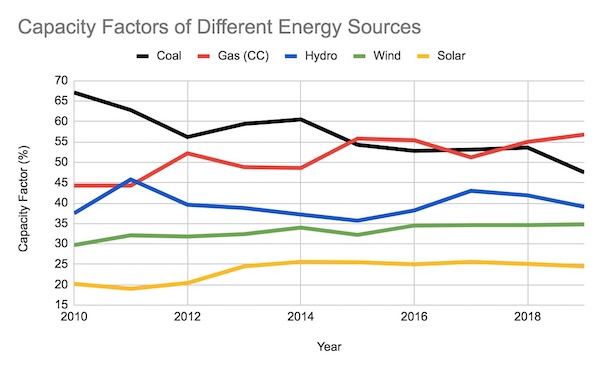 This data is sourced from the U.S. Energy Information Administration

You can see that coal’s capacity factor (in black) has decreased substantially over the past ten years, despite many plant shutdowns. That is because the remaining plants are running less often as electricity markets prefer to run cleaner plants. This has made coal power more expensive. Gas plants (in red) have picked up some of the slack by running more often. But wind (in green) is also making improvements, and those are related more to technology than to market forces. Wind is becoming a more reliable resource.

You may be wondering how technology can make more wind power from the same wind. Well, computer models can help to better site (position) the turbines to capture more wind. A “yaw system” can dynamically rotate the turbine to face the wind, while a “pitch control” mechanism can swivel the blades to pick up more wind. But most importantly, taller turbines pick up higher, more reliable wind, and offshore turbines pick up steadier ocean breezes. 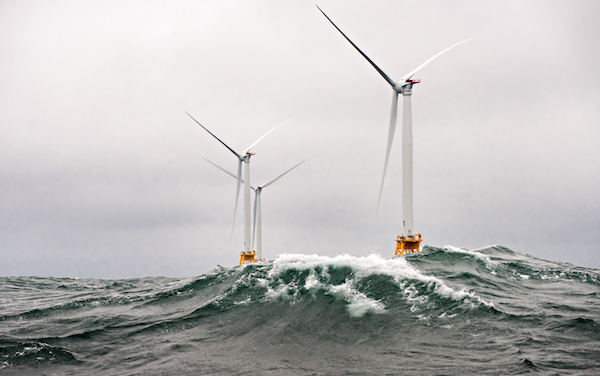 European countries have installed 5047 offshore turbines to date, including 502 in just the last year. The UK and Germany are leading in installed capacity. The US also has great potential for offshore wind, as you can see in the map below. Since around 80% of the nation’s electricity demand occurs in the coastal and Great Lakes states, this offshore power is conveniently situated. (3) 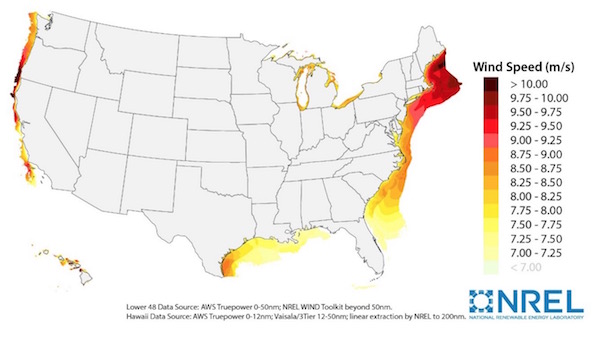 Incredibly, the US has only five wind turbines offshore right now, located near Block Island off the coast of Rhode Island. In the last few years, though, the industry has gained momentum in the US, and there are commitments for 20GW of wind (3000+ turbines) in just the next five years. 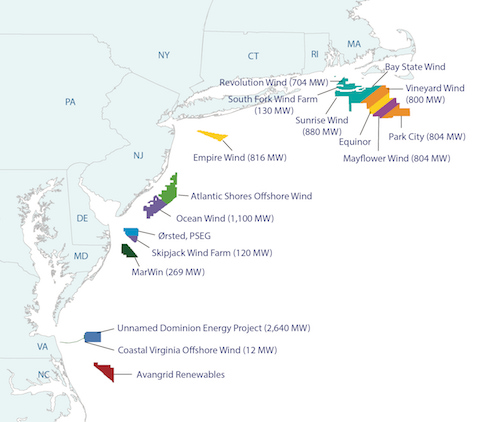 One of the challenges we have on the west coast, and also in Maine, is that the ocean gets deep very quickly, so offshore turbines that are fixed into the ocean floor are not practical. Fortunately, floating turbines are being developed, and quickly, in part because oil and gas companies have considerable experience with this kind of technology. It is amazing to me that these not only work, but can work better than turbines built into the seabed. A journalist spoke with Po Wen Cheng, head of an international research project on floating wind energy at the University of Stuttgart, and relates that Cheng says that: “not only are winds in deeper waters more powerful than those closer to shore but the physics of the flexible, suspended rigs enables them to carry larger turbines. … Cheng argues that floating turbines could be even taller than today’s largest offshore rigs, perhaps with 400-foot blades and towers stretching nearly 1,000 feet into the air — as tall as the Eiffel Tower. Turbines of such dimensions could generate three times the electricity of today’s most advanced onshore turbines.” (4) 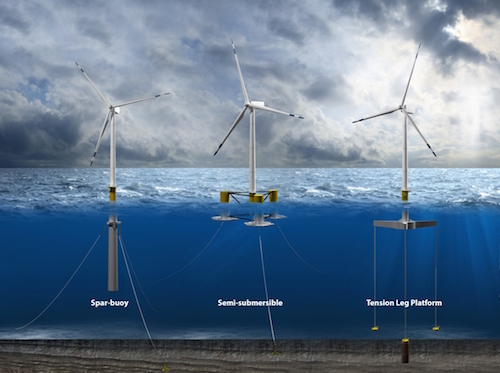 This is not just theoretical. A pilot floating wind project has been running very successfully off the coast of Scotland for several years. With five 6 MW turbines, it realized a capacity factor of 56% in its first two years of operation. To put that in perspective, that means each floating wind turbine generated 6 * 365 * 24 * 0.56 = 29,434 MWh of electricity per year. An average California home uses 6552 kWh per year. So a single one of those floating turbines could power 4492 typical California homes. Consider that the UK already has installed about 1900 offshore wind turbines. Suppose California were to install just 1500 turbines along our coast, newer models, say 8 MW on average with a good 50% capacity factor. That 12 GW of offshore wind would yield 53 TWh of energy per year, which is around 20% of California’s annual electricity consumption. That is an enormous amount of renewable energy.

Maine has seen the light and is going ahead with a pilot project of two 6 MW turbines. The Bureau of Ocean Energy Management analyzed six potential sites in California, predicting a capacity of 16 GW in just those areas. With the coastal winds coming on strong in the evenings just as our demand is ramping up and the sun is going down, it seems like a great complement to our solar power. 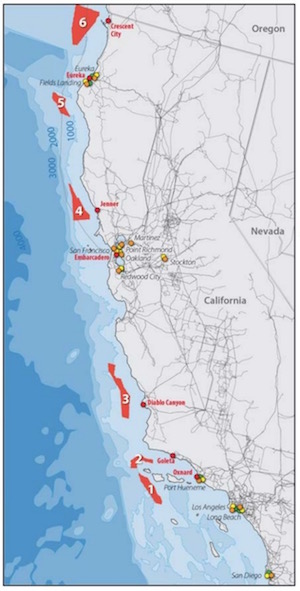 And yet. California, for all its clean energy aspirations, has no pilots for offshore wind. No plans. Just long-lingering hopes. The obstacle is not birds, or marine life, or fishermen, or wealthy coastal dwellers concerned about aesthetics. It is not marine navigation, or even economics. Instead the major obstacle to offshore wind in California is the Department of Defense. According to the San Diego Tribune, “The U.S. Navy considers vast portions of California as ‘wind exclusion’ areas, including the entirety of Southern California.” Here is a map that the US Navy released about two years ago showing those areas in red. 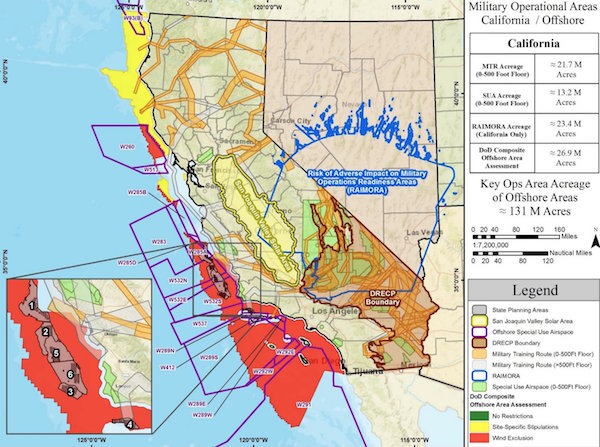 The Navy is not leaving much room for offshore wind! A central coast Congressman, Representative Salud Carbajal, has been talking with the US Navy and others for years to find some way to establish offshore wind in his area. It is a great location, especially given ample transmission capacity from the demise of the Morro Bay gas plant in 2014 and (soon) the Diablo nuclear plant. But negotiations are slow going. A recent update from E&E News indicates that the Navy has offered to exchange a small area in return for a ban on many other areas. Among other things, the Navy is suggesting that wind could be built in the Monterey Bay National Marine Sanctuary. Carbajal, on the other hand, is suggesting that it would behoove the Navy to learn how to navigate around wind turbines given that so many other countries, including China, are erecting them along their coasts.

So, we’ll have to wait to see where California ends up with this very promising resource. Northern California may have the best shot in the short term. Change is disruptive, and change of the magnitude we need to see over the next 10-20 years is not easy. We see the tension across all forms of low-carbon energy, however promising they appear on paper. I applaud politicians like Carbajal who are really trying to make it work.

Notes and References
0. I will be taking the next few weeks off from this blog to do some summer activities. Happy Fourth of July!

1. The capacity factor of a solar farm is also affected by technology (e.g., whether the panels have tracking capability to better orient towards the sun) and market factors (e.g., how often the plant is called on to operate). Solar plants that need a lot of maintenance will also have lower capacity factors.

2. Nuclear energy is not shown in this chart. Nuclear has the highest capacity factor, at over 90%. Geothermal energy is also high, at around 75%, though there is much less of it.

3. This statistic and others can be found in this “top ten” list about offshore wind.

4. If you are wondering how such an incremental change in turbine size can make a 3x difference in electricity produced, it is because wind power is proportional to the cube of the wind speed. Engineers spend a lot of time tuning turbines (“orthodontics for wind farms”, as one writeup puts it) to increase energy production.

5. You can find a good overview of offshore wind in the US from the American Wind Energy Association. This report from the Office of Energy Efficiency and Renewable Energy has lots of information about US offshore wind plans.

6. This report has lots of data about wind energy (including offshore wind) in Europe.