﻿ The Ballad of Andy and Rocky | Art Space | John A. Barry And Bill Carmel | DanvilleSanRamon.com |
Include Photos | Include Comments | Print this page | Close Window

The Ballad of Andy and Rocky

This blog entry memorializes the recent painting of a mural for the Lamorinda Arts Council project “Artify Orinda.” Details can be found at https://lamorindaarts.org/artify. What started as a simple plan to paint indigenous fauna and flora on a wall in downtown Orinda soon became a story that is presented here along with an image of the mural. Enjoy! 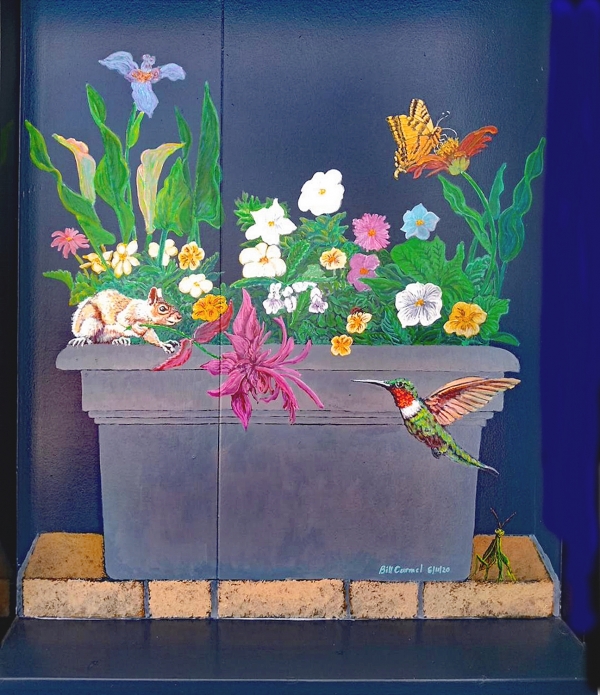 This is the story of two brave little animals, Andy the Hummer and Rocky the Squirrel, both struggling to live amid human suburban settlements. In the temperate chaparral of the San Francisco Bay Area, wild animals cling to life by their wits and good fortune. Some live in harmony with plants and other animals (pollinators), while others (ravagers) take things. The pollinators understand that they are made to nurture, to protect, to care for their kind. Cultivated by humans, gardens in the area provide flowers, fruits, herbs, and vegetables all year round, enough for all when the animals take only what they need. These gardens include the flower of Monarda didyma, a native North American plant of the mint family with the mythic properties of nurturing by healing emotional wounds. It attracts the love and devotion of all who see it and drink tea made from it.

The Ballad of Andy and Rocky

An immense feeling welled up inside Andy the Hummer at first sight of her, perched atop a magnificent pineapple sage. He flew up to her and couldn’t believe she became more beautiful the closer he flew. Hovering just above, bobbing back and forth, he sang at the top of his voice, over and over until she nodded to him. She chirped her name, Anna.

Then he raced high, tore a hole in the sky. No need to look back to see that she watched. When it seemed wings could push air no longer, he lunged back down—and just before reaching her perch, he stopped, whipping his tail with a fierce crack that she pretended did not shock her. But not for long. She flew off into the nearby quince tree where she would nest and raise her brood. Andy watched from a place just above and sang to her from time to time. He warned off the other male hummers that wanted the garden’s sweet nectar. He protected his little piece of paradise.

Paradise for a hummer is finding a garden with year-round nectar-rich flowers and humans to tend the garden. Andy’s garden grows his favorites: Monarda didyma, or bee balm, as well as Salvia elegans, penstemon, verbena, lavender, cosmos, and yarrow. Pollinators sing to the plants and rejoice in the seeds that renew the garden. The generations thrive. Anna took a week to build her nest; a few days later, she filled it with two precious eggs.

Andy recalled the legends handed down to him from the beginning of time about the invasions, plunder, terror, and death that ravagers impose. There seemed to be no limit to what they take; when there is something they can eat, they decimate the plant life before the pollinators harvest the flowers’ nectar, before the humans harvest the vegetables and fruits, before the plants can make seeds for the next generation. With their keen sense of smell, their grubby paws, their ability to grab and scourge, ravagers find the gardens and tear apart the plants, especially the newly sprouted. Gluttons, ravagers eat a bite of each fruit or vegetable, discard it, and go on the rest. Squirrel ravagers hoard plentiful pine seeds to feed their brood the following winter. Ravagers make sport out of most any task. Fun and games.

The gray squirrel named Rocky is a beast that lives in the nearby gray pine trees. All pollinators fear this ravager. Not only does he pillage the fruits and vegetables but he also hunts the eggs and young of the birds and animals that nest in his territory. For some unknown reason, he leaves the lizards alone. Andy keeps a watchful eye on Rocky. When Andy suspects that Rocky is stalking prey, he dive-bombs the scoundrel, kamikaze-style, using his long thin beak like a dagger.

Then the unspeakable horror happened. Was it a day or two days later? Anna’s nest with the chicks was nowhere to be found. Andy cried out in horror and disbelief, over and over, but Anna never answered. He darted here and there, frantically searching and pleading. Finally he spotted the nest, torn apart—eggshells and feathers scattered on the ground. Andy blamed the ravager; after all, this is what ravagers do. He set off to find the beast and avenge the murder of his family. Then he saw Rocky running along a high pine branch. Andy took off like an arrow and nicked Rocky hard enough to knock him off the branch. Down Rocky fell to a branch below; he couldn’t hold on and plummeted to the ground. Startled and dazed, he caught his breath and scampered at full speed toward another tree. Andy caught up and nailed a squirrel leg with his rapier beak. Rocky skittered around the trunk out of sight and dug into the needles. He hid there and froze. Andy lost him, darting around the garden, up and down the trees. He finally settled into the quince tree to wait until Rocky surfaced.

Rocky knew that his injury would take time to heal. Meanwhile Andy patrolled the garden, calling on the other birds—the finches, the robins, the quail, and even the jays—to act as alarms. Finding Rocky took vigilance and patience. It wasn’t long before the other birds would shout out the moment Rocky appeared. They knew what Andy’s distress calls meant that terrible day. They had heard it before.

Rocky pulled himself up into his nest in the tall gray pine, waiting until dark before sneaking out to find his hoards of pine seeds stored for the winter. Gradually his leg healed. He kept watch on the garden, wondering if Andy and the other animals would sleep long enough so he could feast on the now ripe apricots. The mission figs were too far away to check. Also, it was mating season, and he knew the primal feeling that would overpower him.

And so it would go for the next few months. If Rocky left his nest during the day, the birds and animals sounded the alarm. Andy dive-bombed him, giving no quarter. Rocky was lightning-quick as well but began thinking about migrating to another garden. After a few months, he would travel as far away as he could see from his perch in the gray pine. Over the boundary fences he would wander. That is, until he found another garden, more than a day’s travel away, with Monarda plants in full bloom. It is in his travels beyond the boundary fences that Rocky finds the mentor who helped change his way of life, but that is a story for another time.

Rocky had noticed how the hummers and other pollinators favored these flowers. Their complex blooms are a vibrant, iridescent red, with a hint of bergamot purple and a beautiful minty sweetness. Elixir from the heavens. Pollinators love this plant so much that they will fight over it and use it to curry favor from those they allow to sip its sublime sweetness. So, Rocky the Squirrel hatched a plan for a truce with Andy the Hummer.

Andy and the other birds had not seen Rocky for many days. Rocky made his way back to the garden one night. He chewed off the blossoming Monarda branches and hid them in the nearby mounds of pine needles. Then he returned to his exile to plan his next move. Soon he had it. He cleanly snapped off one of the giant Monarda blossoms in that garden and ran at top speed back to where he knew Andy waited to wreak vengeance.

Along the way, Rocky dipped the blossom into several ponds so it could drink and stay fresh. Rocky jumped over the border fence of the garden just in time to see Andy still patrolling the Monarda patch. Rocky climbed up onto a backyard window box overlooking the garden. He clutched the Monarda blossom in his right armpit and paw while waving it in a figure 8 pattern to catch Andy’s attention. It caught the attention of all the birds at once, and the cacophony of the alarm drew Andy to the window box.

Andy could not believe what he saw. The source of his most profound grief and agony peeked from around the window box. He hovered for an instant, ready to attack. Rocky chirped in his most sincere, apologetic voice how sorry he felt for Andy’s loss and displayed the largest Monarda blossom ever as a peace offering. The scent of the blossom mesmerized Andy. Never had he seen a Monarda blossom so large and beautiful and filled with the nectar he prized above all.

Andy hovered up and down, side to side, suspecting a trick from this nemesis. But Rocky held the blossom and faced Andy while chattering his amends without stopping. Rocky bowed his head and held the blossom steady. Andy took a sip. Rocky placed the blossom on the ledge and scampered back to his nest, with the birds watching his every move.

A confused Andy looked at the Monarda blossom and gently licked a glowing fluted red petal. He looked at the pine tree, then the quince tree. Over and over. He quietly zipped up to a high branch in the quince to ponder this turn of events. As he perched, overlooking his sacred garden, a memory appeared in his mind. It must have been from last year; it did not seem recent. He remembered a small gray squirrel frolicking around the branches of the pine tree, chattering with glee at the fun of it. Beautiful and innocent, it must have been Rocky the kit squirrel before he learned how to pillage and murder. That memory changed Andy. Mercy replaced the dark thoughts polluting his mind. From that time on, he did not challenge what Rocky was doing, as long as Rocky kept his distance from the garden, the Monarda, and the other birds. And Rocky stopped foraging in Andy’s garden and in the fruit trees. He hunted and foraged beyond the border fences.

So that is the story of two avatars: Andy the Hummer, who overcomes oppression and a need for vengeance, and Rocky the Squirrel, who triumphs over a family history of pillaging and murder. The two go beyond settling for a truce, and this releases them from their ancestral struggles. They learn to live together in the garden paradise. The Monarda blossoms grow back, and there is enough food and water for all. A tenuous peace prevails. Maybe next year there will be new generations of hummer chicks and squirrel kits who will learn the new ways and teach their children in turn.

As they’ve done since the beginning of time, the humans cultivated the gardens with love, kept the compost going, and provided enough water. Their songs honored the earth, the sky, and the waters that give life. All was right with the world.

As fate would have it, the Monarda played a central part in the story of the American Revolutionary War. At the Boston Tea Party, American colonists achieved a bit of redemption from the bitter cycle of vengeance and oppression. The Monarda plant was a gift to the colonists from the Original People as a replacement for the overtaxed English tea dumped into the waters of Boston Harbor. The Monarda flower occupies a central position in the mural The Ballad of Andy the Hummer and Rocky the Squirrel, which memorializes this story as an allegory for all struggles against oppression.