A few weeks ago I found myself staring into a refrigerator case full of plant-based milks, with no idea which one to choose or why. A guy next to me was doing the same thing. “You know, you can buy them for less at Costco”, he offered, mentioning that they come in bulk packages. That was good to know -- these can be pricier than dairy milk -- but first I wanted to figure out which one to buy! 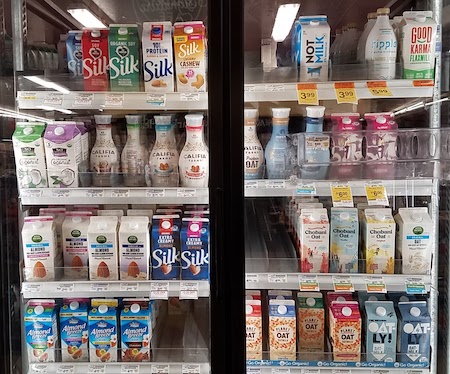 The number of choices can be paralyzing, making it harder to try any of them, so I thought I’d do a comparison for this week’s blog post. That way, next time you pass this case in the grocery store, you have an idea which one you want to grab and you don’t have to stand there puzzled and frustrated!

If you don’t want to read this whole blog post, my summary would be:

- Oat milks and pea milks have a low impact on our planet (emissions, land use, water use) and they also have much less sugar and saturated fat than dairy milk. (I did not try other versions like soy milk.) (1) (2)

- They tasted better than I was expecting, and I’d be happy to use most of them.

- The most milk-like oat milk in my opinion is Chobani. Try Chobani’s “Extra Creamy” if you like whole milk or “Original” if you like 2% milk.

- If you like non-fat milk, or generally prefer less fat and sugar, you might try Planet Oat. It is not quite as white or as creamy, but it tastes good and would be easy to get used to.

- Most of us get more protein than we need. However, if you want an alternative milk with similar amounts of protein as dairy milk, I would recommend Ripple, especially for those who like whole milk. It is creamy and smooth and tastes good, but it is pricey.

- Costs vary, with Califia Farms and Ripple being the most expensive. (They are also the only two to use plastic bottles.)

A note on the selections in this blog post: I only tried oat milks and pea milks. I tried the “original” versions of common brands along with a few variations. I did not try Silk’s oat milk, but I do have some nutrition information for it included below.

If you are wondering what these milks look like:

You can see that there is some variation in color. The two whiter ones in the middle are Chobani, which is one reason why I say this option is more milk-like. The two on the right are pea milks, which were also somewhat whiter. Open Nature on the far left seemed especially thin. Califia Farms and Planet Oat were both on the browner side, and Oatly had maybe a tinge of green. But in my opinion, most people would be happy with one of these options, depending on their preference.

Plant-based milk brands that correspond to the eight glasses shown above.

Many brands have “extra creamy” variations that have more added fat. Most use sunflower oil for the fat, but Chobani and Oatly use rapeseed oil and Open Nature uses canola oil. Nearly all also use gellan gum to help stabilize and thicken the liquid.

The taste of most of these was pretty bland and pleasant. Many have a slight taste of oats. Chobani may have been the blandest, which is part of my recommendation as the most milk-like. It didn’t taste much like oats or anything else, to my pallet. It was also pretty creamy. The ones that tasted the most different from milk in my mind were Not Milk, which was a little on the savory side, and Califia Farms, which seemed especially oaty. But your mileage may vary -- this part is very subjective!

You can see that all of the plant-based milks have much less sugar than dairy milk, and also less protein, with Califia Farms and Ripple coming closest. (Both of those brands use pea protein, as does Not Milk.) Fat content varies, with Planet Oat generally having the lowest fat of the brands. The non-oat varieties (Not Milk and Ripple) have somewhat lower calories.

In terms of cost, there is considerable variation between brands, and all are more expensive than even organic dairy milk. One thing to notice is that many of the containers are smaller than a half-gallon, so the prices can be deceiving. There do seem to be occasional sales that get costs down to as low as $0.05/ounce. The prices shown are from Safeway (non-sale); there may be differences between stores.

The rest of this post shows the container and nutrition label for the varieties I tried, along with a few other notes.

Chobani
Chobani is a well-known purveyor of dairy products that recently started making oat milks as well as yogurt-like products based on oat milk. It has several varieties of oat milk: regular, extra creamy, vanilla, zero-sugar, and zero-sugar vanilla. The two I tried seemed to have good color, texture, and taste. Chobani’s oat milk is more expensive than dairy milk, with a middle-of-the-road price compared with other plant-based milks that I looked at. Its products have similar fat and calories as dairy milk, and less sugar, saturated fat, and protein. 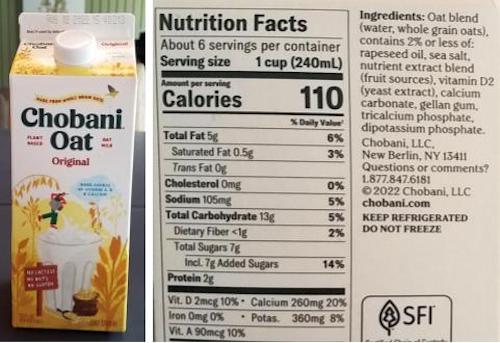 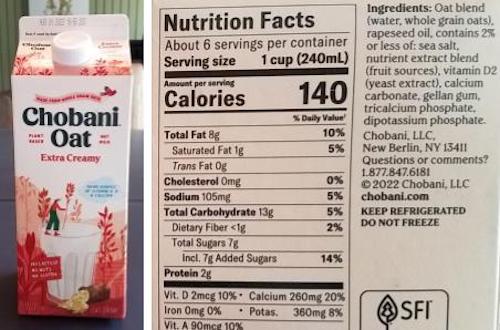 Planet Oat
Planet Oat is made by dairy company HP Hood. It offers several varieties, including regular, extra creamy, vanilla, unsweetened, unsweetened vanilla, and chocolate. These have much less sugar, saturated fat, and protein than dairy milk. These also tend to have less fat than other oat milks, and so less calories. Planet Oat also makes frozen desserts and coffee creamers, as well as shelf-stable milks that require no refrigeration. 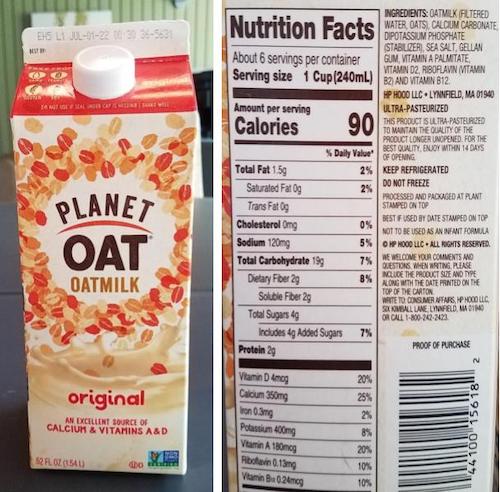 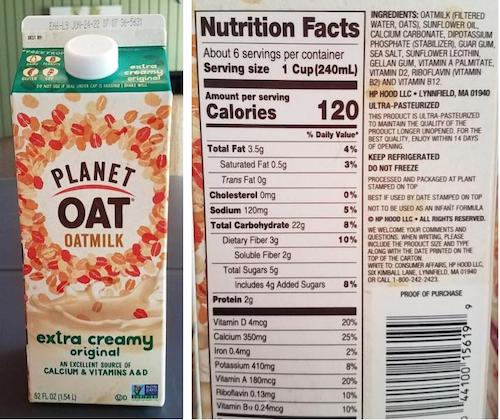 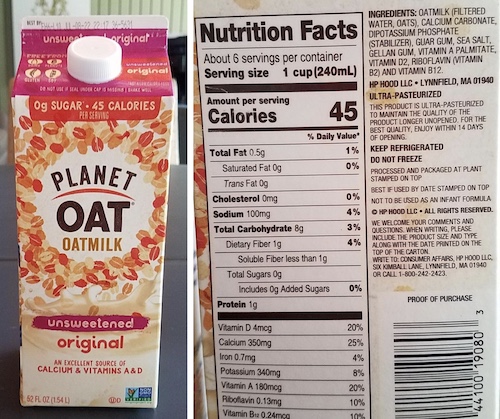 Oatly
Oatly is the first popular oat milk, originating decades ago in Europe. It has low-fat, full-fat, and chocolate varieties, as well as a creamer. Oatly also makes frozen desserts and yogurt alternatives. Oatly has somewhat more protein than other oat milks, and a less milky-white appearance than dairy milk. This brand is known for unusual marketing, as you can tell from its web site. It is one of the better values, coming in full 64-ounce containers and with a good overall combination of taste, looks, and nutrition profile. 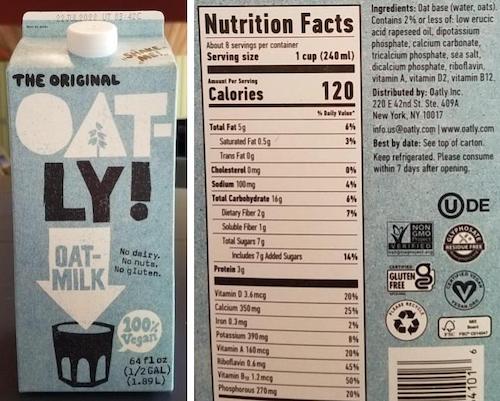 Open Nature
Open Nature oat milk is the Safeway brand. I found it to be pretty thin and watery-tasting, so I would not recommend it as a top pick, though it is not offensive in any way. It is relatively inexpensive and has a nutrition profile similar to that of Planet Oat. 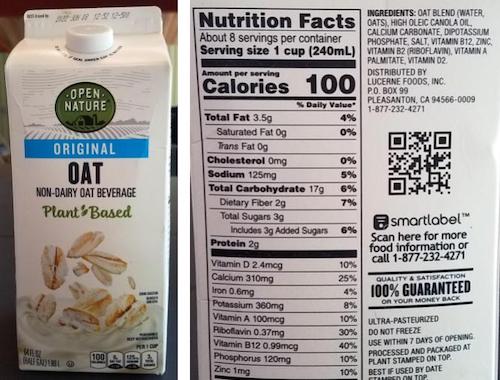 Silk Oat
I did not try this oat milk from Silk, which is better known for its soy milks. Silk also produces other plant-based milks as well as creamer and yogurt alternatives. I can’t comment on its looks or taste, but I do have its nutrition information. 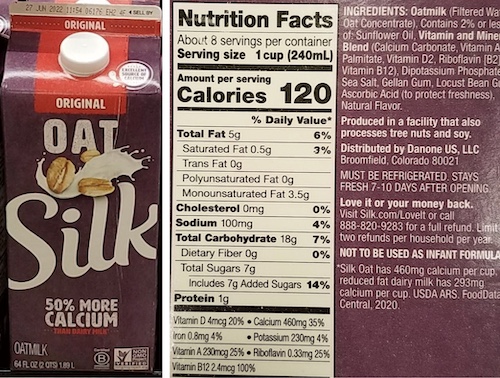 Califia Farms
Califia Farms, based in Southern California, makes many kinds of plant-based milks, including almond milk and coconut milk. They have several varieties of oat milk, including creamy, low-sugar, vanilla, and protein versions, as well as an almond blend. They have some creamers as well as shelf-stable versions. Their product comes in a small (48-ounce) plastic bottle, and is among the most expensive of the products that I tested. The protein oat milk is light brown and creamy, and contains both oats and pea protein, as well as smaller amounts of sunflower seeds and flaxseed oil. 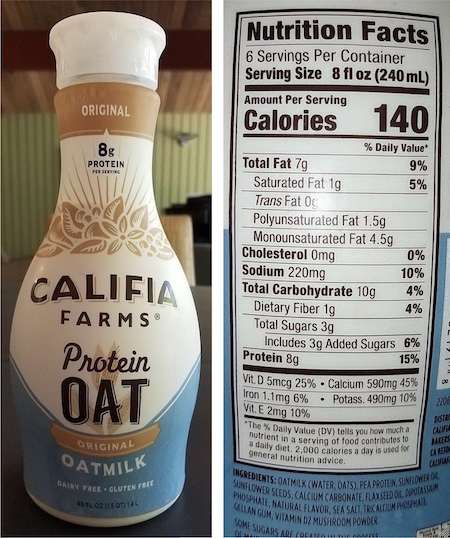 Not Milk
Not Milk, which started in Chile, offers 1%, 2%, and 4% pea-based milk. This is probably the most “different” of the products covered here, with a somewhat more complicated ingredient list. I did not love the taste at first try, but it does look and feel like milk. 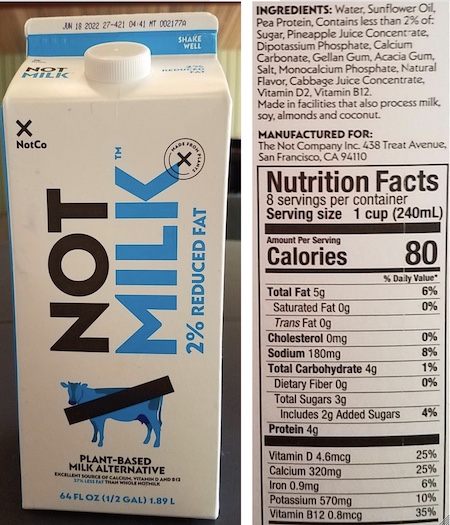 Ripple
Ripple, a local Bay Area company, makes a few different protein milks, plus an oat blend, as well as protein shakes and frozen desserts. The version I tried, unsweetened protein milk, was very creamy and white, with a nice mild taste. It reminded me of whole milk. 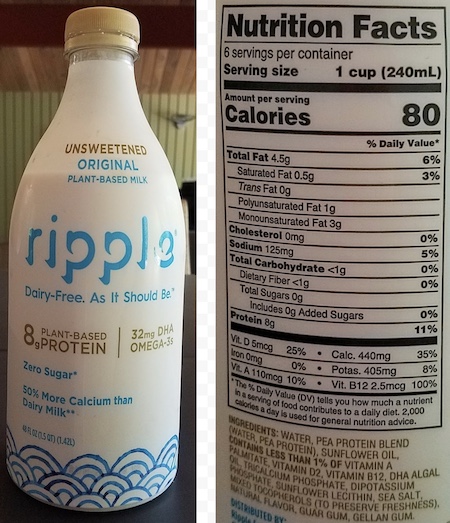 Homemade
In case you are wondering, you can also make your own oat milk. It is a lot cheaper, but you need a good blender. I don’t have a Vitamix or similar, but mine seemed to do fine. I used this recipe. I thought it tasted pretty good, and it couldn’t have been much easier to make. It did separate after a night in the refrigerator, so I had to stir it. It was maybe a little bit more yellow than the store-bought oat milk and not as thick. I think it also separates more easily, so you have to stir it before using it. 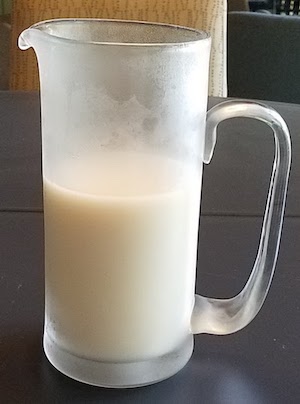 To sum up, these plant-based milks are better than I was expecting. In retrospect, I shouldn’t have been so hesitant to try them. You can look for the one that is most like the milk that you are used to using, or look for the one with the nutritional profile that you would like to have in your diet and spend a few days getting used to it to the extent you find it different. Or go for something in between.

I think any of these options would work well for drinking and pouring on cereal or mixing in a hot beverage. I have tried making pudding and quiche with oat milk, both of which seemed to work out fine. But I am generally a newbie at plant-based milks. Many of you have more experience than I do with these, so I’d love to hear your opinions, comments, or questions in the comment section. I’d also like to hear from people who are just trying one for the first time.

Notes and References
1. There are many types of plant-based milks beyond the oat milks and pea milks I tested for this blog. Soy milk is probably the biggest gap, as it has low impact and a good nutrient profile. Other types of plant-based milks are either harder to find (e.g., hemp milk) or have a larger impact on land or water use (e.g., almond or coconut). There are also cashew, macadamia, sesame, pistachio, hazelnut, and rice. Oof. Environmentally, I get the sense that oat, pea, soy, and hemp are the best bets, though there is no one conclusive study.

I don’t show the data for fiber above either. Dairy milk has no fiber. Some of these plant-based milks have a few grams per cup, as shown on the labels.

Finally, all of the plant-based milks are supplemented with calcium and a few vitamins like vitamin D. On paper they have as much or more than dairy milk, but I don’t know how well the additives are absorbed. (Chobani is an exception in that its oat milk has somewhat less calcium and vitamin D than the dairy milk that I looked at.)

Comment Guidelines
I hope that your contributions will be an important part of this blog. To keep the discussion productive, please adhere to these guidelines or your comment may be edited or removed.
- Avoid disrespectful, disparaging, snide, angry, or ad hominem comments.
- Stay fact-based and refer to reputable sources.
- Stay on topic.
- In general, maintain this as a welcoming space for all readers.