﻿ Will the power go out during this heat wave? | A New Shade of Green | Sherry Listgarten | DanvilleSanRamon.com |
Include Photos | Include Comments | Print this page | Close Window

Will the power go out during this heat wave?

Our local power providers and our grid operator (CAISO) are asking us to conserve electricity over the next few days as record-breaking heat and heavy use of air conditioning strain the grid. Will our infrastructure be up to the task or are rolling blackouts headed our way? 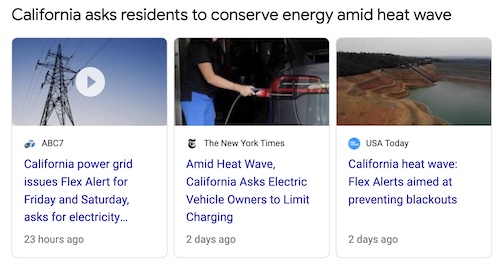 Two years ago on August 14, 2020 was the last time we had a rolling blackout. Peak demand on the grid was about 47 GW in late afternoon. A severe heat wave across much of the southwest restricted imports and our grid operator (CAISO) had not planned well for that. Taken by surprise and unable to generate enough power to serve the load, they were also too late to request much help reducing demand. CAISO was forced to call for rolling blackouts.

Just a few days later, August 17 was a very different story. Peak demand was predicted to be even higher, around 50 GW at 5pm. But CAISO called for conservation earlier and more effectively, and there was a tremendous and unprecedented response, dropping demand by nearly 5 GW. I wrote about that here. No rolling blackouts were needed.

Electricity demand on August 17, 2020. Demand at 6:30 pm was forecast a day earlier to be almost 49 GW, as shown by the faint stair-step graph. Calls for conservation led to unprecedented savings, and demand instead was 44 GW, a remarkable 5 GW lower than forecast. Source: CAISO

Two years later, we face a similar event but with some generally beneficial differences. We have added more resources to the grid (1), including over 3 GW of batteries that can provide power when we need it. The heat wave does not blanket the Pacific Northwest, as it did two years ago; and there are no raging fires in that region as there were one year ago; so we should have more access to those imports. CAISO is much better prepared, and they are calling for conservation earlier and more effectively. A formal Emergency Load Reduction Program is on the books, paying $1000 per MWh reduced when an emergency is announced. We have more appliances that conserve automatically as needed, such as grid-tied appliances and chargers. And we have tightened up on some rules, like cutting back on exports during times like this. As a result, I am optimistic that there will be no outages this time around. But it’s not a given.

Why are grid operators concerned? Let’s look at the forecast for Tuesday, September 6. (Labor Day looks similar to Tuesday. Sunday September 4 and Wednesday September 7 are not quite as bad.)

Here is a graph of forecast demand on Tuesday. You can see that demand is topping out at over 50 GW.

That is very high, but since we have many renewables on the grid, it is actually not as hard for us to meet this demand as it is to meet demand when the sun is getting lower. If you look at the demand minus what can be handled with solar and wind energy, which CAISO refers to as “net demand”, you can see the peak comes between 7 pm and 8 pm. The forecast is nearly 46 GW. The peak net demand last time we had a rolling blackout was only 42 GW..

How does this compare with what resources we anticipate having available on the grid at that time? Take a look at the graph below, particularly the green lines.

The heavy dashed green line shows supply, which is much greater when the sun is shining. As the sun sets, demand is forecast to outstrip supply from 6-8 pm. (The purple “net” curves show similar.) This is why your power provider is asking you to pre-cool your house midday and then use less air conditioning in the evening. The same applies for other power-hungry appliances like EV chargers, electric dryers, and pool pumps. Use the power a little earlier in the day or a little later.

Below is a close-up look at the 4-9pm interval. Normally the faint dotted line (demand) is below the corresponding dark dashed line (supply). But here they cross over between 6-8pm. The forecast gap between supply and demand is about 2.5 GW, a considerable amount. 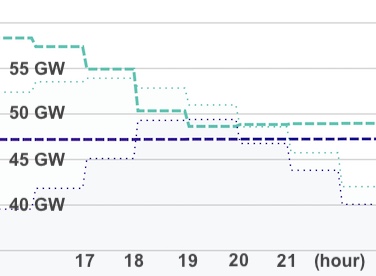 The demand forecast includes a 7.5% reserve margin that is set aside in case of a sudden failure of generation or transmission. It is appealing but incorrect to think of the “real” demand being 7.5% lower than shown above. It is extremely dangerous to run without reserves. Unexpected supply problems do happen, perhaps particularly during extreme events like this. Without reserves, such a failure could lead to a catastrophic grid collapse that could take a very long time to recover from. The grid operator therefore insists that reserve overruns be very temporary, on the order of 15 minutes.

On the other hand, the supply shown above is perhaps overly generous. The amount of resources that the grid has verified to be available to be brought online is about 2 GW lower, at 48,430 MW. Another 1,828 MW of “supply” is reflected in credits that power providers receive for some other types of resources. Will these accounting credits keep the lights on? It depends. Some of the credits might represent shares in a power plant that was jointly purchased. Those seem pretty legit. But others might represent “demand response” savings that a utility has said are available to reduce demand. These are not verified closely by the regulators, and those and other credits have been the source of much contention since the August 2020 rolling blackout. The forecast gap may therefore be larger than it appears.

You may be wondering, given this, why I am optimistic that we will keep the lights on. Several gigawatts is not easy to come by. Well, the 5 GW of reduced demand in August 2020 was really impressive, and it was repeated for several days. I am hopeful that people and businesses and manufacturers will again step up to the plate and dramatically cut back on power between 4-9pm, and especially 5-8pm. I am a little worried about Labor Day, since as a holiday it may be harder to cut back since fewer power-intensive operations may have been planned. But CAISO has better communications in place, and the CPUC has a formal program for emergency load reduction. Generally, we have planned for and thought much more about these events than we had two years ago. So I am hopeful.

If you want to follow along with what the grid is up to in these critical evening hours, you can find the current status at the top of CAISO’s “Today’s Outlook” page. You can expect to see Restricted Maintenance from noon through 10pm through at least September 8, and Flex Alerts from 4-9pm on those same days. I also fully expect to see Energy Emergency Alert Watch (EEA Watch) notifications for many of those days. These indicate a “day ahead” projected deficiency and are a call for more generation. We have already seen one issued for a few evening hours on each of August 31 and September 1, 3, and 4. 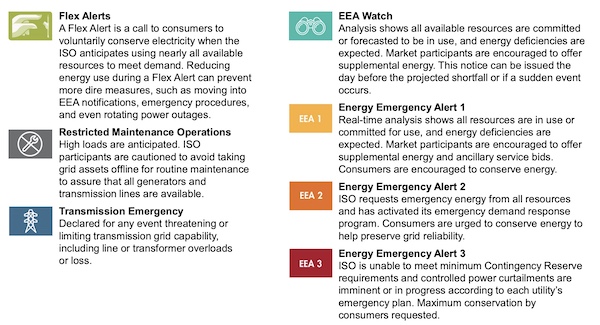 If these prove insufficient, real-time notices get increasingly more urgent. An Energy Emergency Alert 1 (EEA 1) is issued when, despite “day ahead” calls for more supply and reduced power, we are still facing a shortage within the next few hours. This first real-time alert means that more aggressive reductions in demand will be called for. For example, a demand-response event may take place, which will reduce power to grid-connected appliances. On August 31 an Alert 1 was issued from 5-8pm, and a demand-response event occurred briefly at 7:30pm.

The next-level alert, EEA 2, is issued when we are using up all power other than our reserves. It serves as a last-ditch request for resources. We have not seen one of these issued yet this year. The ultimate EEA 3 alert indicates that we have been forced to start using our reserves, and rolling blackouts are imminent or in progress.

What I predict will happen is that we will get to, but stop at, the EEA 1 stage. Organizations, manufacturers, and residents will reduce power use, particularly during the critical 5-8 pm period, and we will not have to resort to more disruptive emergency measures. Do your part: Between 5 and 8 pm the next few days, and especially on Monday and Tuesday, turn your thermostat to 78, use regular fans for extra cooling, postpone charging your EV, and wait to turn on high-powered appliances like electric dryers, pool pumps, ovens, and stoves. A little attention during a few evening hours will help to minimize the disruption caused by this record-setting heat wave.

What happens if we don’t get it together to do that? Our power providers will orchestrate rolling blackouts, most likely during that 5-8 pm interval. These will be announced in advance and will last between one and two hours each. Any given location should see at most one of these outages. Since most of us are familiar with the occasional power outage, this should not be a big deal. It will be shorter than many accidental outages and it will be announced in advance. I encourage you to ignore over-the-top guidance such as these tips provided by the San Francisco Chronicle urging you to prepare for rolling blackouts by assembling an emergency kit and creating an evacuation plan. That is nuts. This is a short, controlled, pre-announced power outage. Do what makes sense for your household. If that just means getting a cold drink, plugging in your phone, and making sure you know where a flashlight is, you’re not alone.

As summers get warmer and drier, it stresses the grid. Power plants may not run as efficiently, transmission lines lose more power, hydropower is limited, fires can impact generation and transmission, and people run far, far more air conditioning. On top of that, widespread heat waves and/or fires can reduce imports. But a carefully operated power grid can handle this, and only very rarely should it mean resorting to short, controlled rolling outages. (2) We do need to continue to grow and fortify the grid, and do it with as few emissions as possible in order not to make the summers even warmer and drier. We also need more grid-connected appliances so much of this “flex alert” business can get automated. (3) There is a danger that we will become deaf to these Flex Alerts if they are too frequent. In the meantime, we can all do our part to keep the lights on, and costs and pollution down, by using less power during critical evening hours over the coming record-setting hot days.

I will be adding updates in the comments below over the next few days.

Notes and References
1. CAISO reports that just since last summer we have added more than 4,000 megawatts (MW) of net qualifying capacity, 2751 MW of which is available at 8 pm.

2. The industry standard is that such outages happen less than once every 10 years. We are not there. CAISO estimates that we currently need about 1,700 MW more capacity to meet that target.

3. Has anyone enrolled in newer reward programs like evPulse (for EV charging) or WatterSaver (for heat pump water heaters)? Or more established ones like OhmConnect? Would love to hear your experience over the past week or so.

Last week I reported in this space that over 16% of light-duty vehicles sold in California this year were plug-in or fuel cell (hydrogen). That compares to just over 5% in the United States as a whole. The interesting stat for you this week is that, in China, 26% of new vehicle sales in 2022 were plug-in.

Comment Guidelines
I hope that your contributions will be an important part of this blog. To keep the discussion productive, please adhere to these guidelines or your comment may be edited or removed.
- Avoid disrespectful, disparaging, snide, angry, or ad hominem comments.
- Stay fact-based and refer to reputable sources.
- Stay on topic.
- In general, maintain this as a welcoming space for all readers.