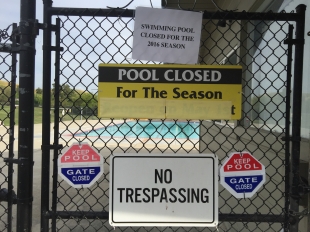 The San Ramon Aqua Bears swim team will no longer have swim practices or meets at the San Ramon Golf Club pool for this swim season. (Photo by Isabella Ohlmeyer)

It's beginning........first the pool is closed, next the houses will be built.

It's beginning........first the pool is closed, next the houses will be built.

The city Planning Commission and the City Council would both have to approve the zoning changes by a 4/5 vote.

The owners created a crisis and are blaming the city for not cooperating.

Like this comment
Posted by Beth
a resident of Diablo Vista Middle School
on May 4, 2016 at 1:59 pm

What a horrible thing to do to these swimmers, all 205 of them! What a disservice to the community. Giving them just 48 hours notice before their season is to start? It's a public golf course. I would send in some serious complaints to whoever is in charge - the city of San Ramon? Who made this poor decision?

Report Objectionable Content
Email Town Square Moderator
4 people like this
Posted by resident3
a resident of Danville
on May 4, 2016 at 2:36 pm

The new owner just raised the prices on golf by a huge amount. Rumor is, they will be letting the course conditions go, therefore, no play. Then, petition the city to put in houses. Fine by me, as the course is one of the worst in the Bay Area.

Report Objectionable Content
Email Town Square Moderator
2 people like this
Posted by Resident and Golfer
a resident of San Ramon
on May 5, 2016 at 9:13 am

My wife and I are not affiliated with the course, and don't even know the new owners and management, but this course hasn't looked or played better in a very long time. It is emerging as one of the best public courses in the area.

Many trees have been removed. All the carts were replaced as of about a year ago. The sand traps have all been rebuilt and some were eliminated or moved. We played there last Sunday and the tee boxes and greens look GREAT. A lot of time and money has been spent on other infrastructure.

We play most of the courses in the tri-valley area on a weekly basis. Even with the cost increases, San Ramon is one of the best buys around. I challenge the last commenter to follow up with actual facts.

What the new ownership did to the swimmers was no doubt a bad step. I understand their motivation, and if they have to build houses on unused adjacent land (or even some of the parking lot) to make ends meet, so be it. The situation doesn't excuse kicking-out the swimmers with very little notice though. That was an unthinking and classless move. Strike-one in my mind. I wouldn't let this ...mistake, color the other positive effects though.

Mis-classifying the course as " the worst" is just going to reduce usage and make it more likely that houses are built in place of the whole course. Ahhhhh, the light-bulb just went on. Is that your motivation?

resident is accurate by stating that SRGC is one of the worst. Let's start with the boring layout. Up and back between the houses is a very boring layout? The range, old and hardened mats with range balls that actually have the dimples worn off of them. The clubhouse, a 60's design that is dirty and run down. No restaurant other than a microwaved burrito. The pro shop, again, 60's style with little merchandise. Yes, they have new carts and resigned bunkers, I'll give them that.

Even Redwood Canyon in Castro Valley is better.
San Ramon GC is the jeans, tank top, and bring your own ice chest type of course.

Report Objectionable Content
Email Town Square Moderator
2 people like this
Posted by Resident and golfer
a resident of San Ramon
on May 6, 2016 at 7:24 pm

Disagree with your opinion about the course itself, but you're entitled to it. SR's slope is 122. You mentioned Bridges, so, if you really are "the best" you may be better served by just going there (slope 146). At least they have the clubhouse you're after. Have fun!

Your comments about the ancillary SR facilities; I AGREE, but couldn't help but notice that they didn't have anything to do with the actual course.

In fact, right after the recent purchase of the course the staff mentioned building housing and new facilities where the clubhouse, swimming pool and range are now (possible change of hole 1 to a par 3). Putting aside (for a paragraph or two) the huge gaff and diss of the Aqua Bears, that plan appears to be sound (GO BEARS - hope the place you've found is better).

Avoiding the loss of yet another golf course is positive, even if you find it boring, "Best."

This thread though appears more about if San Ramon property owners are going to be bullied by the new owners. On that subject Steve (above) is right. The property is zoned for a golf course and that is not going to change without a struggle.

Allowing a builder to simply buy and then change the purpose of the land to suit their needs (cough cough PROFIT) feels a little too much like being pushed around. In combination with what these owners just did to the Bears, well ...THAT'S JUST ONE STEP TOO FAR. You may legally own the land and facilities, but the entire community has an equity interest in the land and how it is used.

If you're reading this Mr. Developer, WAIT JUST A SECOND. If your intention actually is to raze the entire course and put up housing in its place (admittedly still an assumption), you're going to find out at the next zoning committee meeting that there are some strong willed homeowners in this area.

Directly addressing the new owners (again apparent) threat to "shut the course down" because of being "rebuffed." If the choice really is between housing over ALL the course land, and letting the land go fallow ...I'd rather see it go fallow. I suspect though that if those are the only choices you have you'll probably lick your wounds and go away.

If that much housing is your intention, making you GO AWAY, would be a reasonable solution.

We haven't actually heard from you though Mr.Developer...

Report Objectionable Content
Email Town Square Moderator
7 people like this
Posted by Resident
a resident of San Ramon
on May 7, 2016 at 1:43 am

The new owners of San Ramon Golf Club are Tree City LLC which is a shell company of Michael Schlesinger and Ron Richards. Under different LLCs they have bought out golf courses in 5 cities. 3 are no longer in operation, the most recent Poway and San Ramon Golf Club are still operating. It seems clear that the LLCs buy golf courses with the intention of operating them as a golf course for as brief a time as possible. They raise prices, neglect maintenance and then claim the course is not profitable to close it. Once closed they bully the local homeowners and city government to re-zone for housing. In the case of San Ramon the new owners know fully that the zoning is for a golf course and that only per the intent of the city plan. Tree City LLC and its backers are not in the business of operating golf courses. They buy land that is a golf course and then do whatever they can to change that into housing to reap the profits. Tactics include leaving tons of chicken manure to pester the neighbors.

Report Objectionable Content
Email Town Square Moderator
6 people like this
Posted by resident
a resident of San Ramon
on May 7, 2016 at 1:57 am

Pool at the San Ramon Golf Club was always privately owned and never affiliated with the City of San Ramon. While the golf course is open to the public it was and is privately owned by the same entity as the pool. The Aquabears Swim Club had a paid agreement for the use of the golf club pool for the 2016 season. When the golf course was bought out the Aquabears were assured that the pool would be available for the season by the new owners. Closing of the pool 2-days before the season started is poor form at best. More likely it is a tactic to drive business away from the club in general to lead financial difficulties. In purchase agreement the of the golf course the new owners are obligated to keep the course open until December 2016, after which it appears it will be closed due to financial difficulties.

The City of San Ramon and San Ramon Valley School District together were able to find pool time available at Dougherty Valley High School for the Aquabears to continue the 2016 season.

Shame on this for happening Corporate greed has infiltrated our community and a cancer that will be hard to kill.

Report Objectionable Content
Email Town Square Moderator
Like this comment
Posted by San Ramon Resident and Golfer
a resident of San Ramon
on Aug 5, 2016 at 8:37 am

San Ramon Resident and Golfer is a registered user.


I've noticed over the last couple of months that the course is being maintained in a reasonable manner. I've also noticed that usage is way down and onsite employees don't really seem bothered by it.

Knowing what is happening with the new ownership (described above) ...at first I couldn't reconcile the increase in maintenance, but after thinking about it may be the new owners are creating a history of how much it costs to keep the course maintained. The amount of money spent on maintenance is certainly up.

I think we need to find a way to know for sure when watering stops, and be ready to act (injunction) immediately...before the course starts showing neglect.

Has anyone heard anything new?