Editorial: Express lanes are not a silver bullet for I-680, but should help | News | DanvilleSanRamon.com |

Editorial: Express lanes are not a silver bullet for I-680, but should help

by DanvilleSanRamon.com editorial board 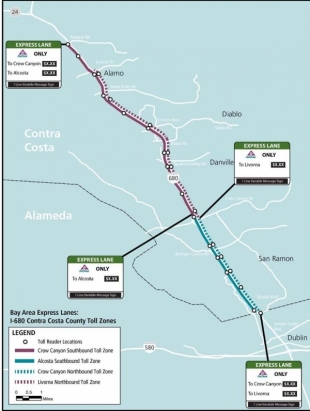 The pavement and lanes that we, the taxpayers, have already paid for and been using should still be available to use for free outside of the rush hours. There's no reason we should have to drive right next to each other when that lane lays mostly empty throughout the late morning and early afternoon. That's when people living in that immediate area are using it and we shouldn't have to pay to now.

How anyone could expect this toll lane to reduce traffic is unfathomable. If the toll lanes make traffic worse, they need to be abandoned immediately and the heads of decision makers and salespeople selling and approving this project need to roll. During rush hour, the HOV lanes are already nearly as backed up or more backed up as the other lanes with no capacity for accommodating significantly more cars so it won't help. During non rush hour times between 5 am to 8 pm, fewer people will probably use the far left lane than do currently because they do not want to pay a toll. As a result, the remaining lanes will become more congested during those times than they are now. Just a boondoggle and waste of time and $56 million building that "Express Lane" without adding another lane like on 580!!!! And on top of it, we taxpayers will be charged to use freeway lanes we have already paid for!!! Sounds like a money making scheme and nothing else!!!!

Did they add an extra lane or just update the same lane that was already there and now they are charging a toll to drive on it.

Love how the MTC and CalTrans and Fastrack try to put a positive spin on a heap of poo.
Traffic will NOT improve on I-680 because capacity has NOT increased. PERIOD!
Changing the segregation lanes into Extortion lanes will do nothing to improve flow. Have none of the "Traffic Engineers" involved ever taken a physics class?
If you fill a jar with sand, it doesn't matter if the sand on the left side has to pay to be there, you still can't put more sand in the jar.

ALSO
IF you are going to charge single driver vehicles for the express pleasure of creeping along in the far left lane, why do ANY vehicles with single drivers get to ride in the segregation lanes without charge? If you are going to demand payment from one group, then you MUST demand it from EVERY group. Otherwise you are truly segregating by your chosen select preferences, and isn't that pretty illegal???

Big question: How many decades will it take to recoup $56 MILLION for roadways that were ALREADY paid for? "Your Tax Dollars At Work" read the sign years ago when these roadways were being constructed.

Report Objectionable Content
Email Town Square Moderator
32 people like this
Posted by Resident
a resident of San Ramon
on Oct 7, 2017 at 4:54 pm

This fiasco toll lane experiment is the kind of thing you get in a one-party state run by a bunch of politically correct liberals who assign huge unelected bureaucracies to make decisions for us & walk all over us. We are living in a state that effectively is a one party liberal dictatorship.

Report Objectionable Content
Email Town Square Moderator
5 people like this
Posted by Alamo Ron
a resident of Alamo
on Oct 8, 2017 at 9:26 am

Here's two quotes from the article:

"...but solo-driver vehicles are required to pay..."

How can a solo driver vehicle be considered a high-occupancy vehicle? It sounds like scam-speak to me.

Report Objectionable Content
Email Town Square Moderator
29 people like this
Posted by Longtime Resident
a resident of San Ramon
on Oct 8, 2017 at 1:26 pm

Here's an example of faulty confused reasoning from the above "editorial":

"Express lanes are credited for another Tri-Valley stretch of freeway being dropped from the top-10 most congested list. According to the Alameda County Transportation Commission (ACTC), the express lanes that opened last year on I-580 from Greenville Road in Livermore to the intersection with I-680 in Pleasanton/Dublin made the difference because they maximized capacity.

However, building additional lanes as part of the I-580 project no doubt contributed to the positive result. It makes sense that travel speed increases and congestion decreases with more lanes available, regardless of the presence of a toll lane."


Report Objectionable Content
Email Town Square Moderator
21 people like this
Posted by Julie K
a resident of Danville
on Oct 9, 2017 at 11:03 pm

Since all the lanes are already filled to capacity, including carpool lanes, anything that helps one lane must then hurt others. So our choices now are to pay for what we didn't used to have to pay for or to sit in worse traffic. How is this helping again exactly?

At least before we could wait until after rush hour. Now they have actually taken a lane away during non- rush hour making that worse too. And they wonder why residents aren't in favor of it. Complete ridiculousness!!

Report Objectionable Content
Email Town Square Moderator
19 people like this
Posted by Bethany
a resident of San Ramon
on Oct 16, 2017 at 2:58 pm

Traffic is much worse in non-commute hours since the I-680 toll lane opened. What's the point in charging drivers when the freeway is running clear? Well, it's not running clear anymore, because freeway capacity has been reduced by one lane.

Report Objectionable Content
Email Town Square Moderator
15 people like this
Posted by Westside dave
a resident of Danville
on Oct 16, 2017 at 3:27 pm

I agree with you Bethany, I've noticed it too as I'm off work at 1:30. Just keep in mind that it's only on the honor system. You can easily slip in and out of the "Express (taxed) Lane where the cameras are positioned. I've witnessed many folks doing just that in the last week alone.

How to Make General Education Requirements Work for You!
By Elizabeth LaScala | 9 comments | 803 views