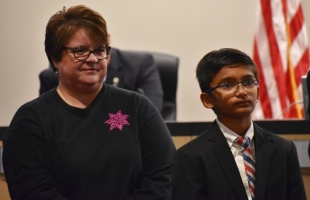 Dispatcher Lisa Blackburn guided 10-year-old Tevin Kuruvilla through rescuing his father from drowning, after he called 9-1-1 in late August. (Photo by Erika Alvero)

Heroes come in all sizes, they say, a quip brought to life by the latest recipient of two awards from local fire and police departments: Tevin Kuruvilla, 10, of San Ramon who rescued his father from drowning this past summer.

On the afternoon of Aug. 30, Tevin and Shoji Kuruvilla went for a swim in their family pool when suddenly, Shoji became unresponsive, unconscious and floating face down in the water.

By calling 9-1-1, bringing his father to the side of the pool and administering rescue breathing in accordance with the dispatcher's instructions, Tevin was able to keep his father alive until police officers and fire officials arrived on-scene a little later.

"You are truly a hero, Tevin...This is an amazing story of bravery and courage, intelligence and I think, most importantly, grit," said SRVFPD fire chief Paige Meyer.

Tevin was alone in the house when his father fell unconscious. He first phoned his mother, but when she didn't pick up, at 4:37 p.m., he made the call to 9-1-1.

Dispatcher Lisa Blackburn, who was also recognized at the council meeting for her actions, answered Tevin's call.

"9-1-1, what's the address of your emergency," she said, according to the audio recording of the call.

"Excuse me, officer, my dad's drowned in the pool," Tevin said, in a perceptibly shaky voice.

Blackburn quickly assessed the situation. Tevin was alone, and his father's head was under the water.

"Can you turn him over so his face is up?" she asked.

"I'll try," Tevin responded. He put the phone on speaker.

Tevin was able to hold his father's head above the water, telling Blackburn that there was "white stuff" coming out of Shoji's mouth and that he didn't know if his father was breathing. He tried to bring his father out of the water, heaving with the effort, but couldn't. Instead, he sat on a ledge a little below the water surface, though the water was still up to the 10-year-old's chest. Shoji Kuruvilla was in the deep end of the pool, and it was too far for Tevin to bring his father to the shallow side, he would say later.

"That's okay," Blackburn said. "Listen, I want you to keep him face up, okay? And I'm going to tell you how to give him mouth-to-mouth. You just do the best you can."

She instructed him in mouth-to-mouth resuscitation.

"I want you to keep trying to do that, okay?" she said.

After about 30 seconds, Shoji Kuruvilla began to cough, his eyes opening a little.

"I want you to make sure you keep his head up and out of that water, okay?" Blackburn said. "You're doing a great job."

"Daddy, come on," Tevin said. His voice, which had remained composed throughout the exchange, started to break.

About 2 1/2 minutes after Tevin had started the mouth-to-mouth resuscitation, police arrived on-scene, laying the man on his side to help his recovery until the fire department came.

Shoji Kuruvilla said he and his son are not ready to talk about the incident yet. But support was overwhelming from friends and community members who showed up en masse at the council meeting, along with representatives from the offices of Contra Costa County Supervisor Candace Andersen and State Sen. Steve Glazer, who also presented Tevin with awards.

Both chiefs commended the council and fire board for approving the San Ramon Valley 911 Communications Center -- a joint fire and police emergency dispatch center which has been on-line since the beginning of June 2016. Before, the SRPD contracted dispatch services out to the Contra Costa County Sheriff's Office, which would then redirect any San Ramon fire and medical calls to the SRVFPD.

"It allowed for a very, very rapid response on our part, some clear directions from the dispatcher to young Tevin...I can't help but think that without that joint partnership that you all had created, a year and a half ago, this could have turned out very, very differently than it did," said SRPD police chief Dan Pratt.

Sandra707 is a registered user.


Attention to it keeping his/her very own Web Link advertisement jingle to a remote folk tune.

What an intelligent and wonderful little child. Most adults would have freaked out.

Good for you, Tevin!! So nice to hear a story with such a happy ending!! I hope your dad is recovering!

Be as mild as possible to avoid harming the Web Link But do not quit there, make certain to vacuum.

Repairing a Disagreement with your Beloved & “Physical” vs. “Social” Distancing
By Chandrama Anderson | 2 comments | 2,588 views

Visual Games During Shelter-in-Place
By John A. Barry and Bill Carmel | 1 comment | 233 views