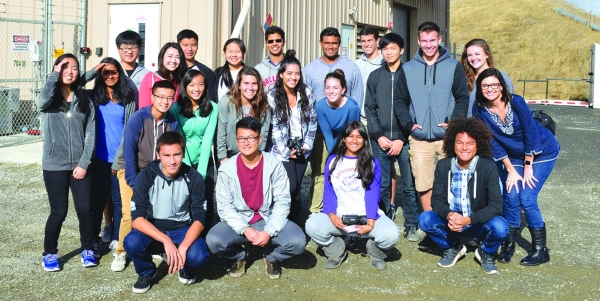 As adviser for Local Leaders of the 21st Century at Amador Valley, Jill Buck (far right) arranges guest speakers and field trips for students, like to the Vasco Road Landfill as part of their study of Pleasanton's waste system. (Photo by Mandy Buck) 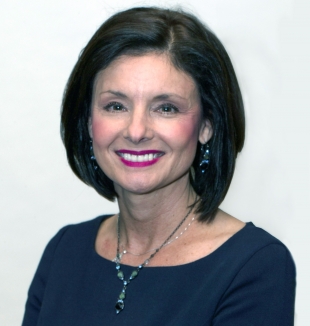 Buck, a Navy veteran and Pleasanton resident since 1999, founded the nonprofit Go Green Initiative 15 years ago. (Photo by Mike Sedlak)

It all started with a mom on a mission.

In 2002, Jill Buck was raising her young children in Pleasanton and serving as a parent-teacher association president when she became disheartened over a lack of environmental education resources at Walnut Grove Elementary where her older daughter was attending school.

A former Navy officer whose job entailed educating fellow officers about then-new recycling mandates across the federal government, Buck was surprised to find the practice missing from her daughter's school.

"The main thing I felt was such a glaring deficiency was the lack of recycling," Buck, 48, said in a recent interview. "We were teaching 18-year-old sailors to do it and it was beyond me why we weren't teaching elementary school students to do it at the time."

Finding a dearth of existing environmental education programs for youth, Buck started Go Green Initiative, a nonprofit headquartered on Valley Avenue that provides training and resources for schools to help them evaluate their environmental footprint and create a culture of conservation and stewardship.

Since being piloted at Walnut Grove, Go Green Initiative's reach has grown to all 50 states and 73 countries, with over 1.5 million students and teachers currently in registered Go Green schools.

The nonprofit's two goals are to conserve natural resources for future generations and protect children's health from environmental pollutants.

"It's true that the Go Green Initiative is an environmental education program, but at its heart it's a child advocacy program," Buck said. "It's less about spotted owls and polar bears -- but I love those things -- and more about what's best for children."

Over 15 years after founding Go Green Initiative, Buck continues to work on broadening its reach. At the beginning of 2016 she started a new program called Local Leaders of the 21st Century, piloting it at Amador Valley High with the help of social studies teacher Brian Ladd.

The concept? Teach high-schoolers about local energy, water, food and waste systems and bring in relevant guest speakers from the community to enable students to enact change themselves.

The Amador students found an environmental initiative to work on right away.

In January 2016, the city of Pleasanton began implementing an ordinance that requires entities that generate a lot of food scraps -- like grocery stores and restaurants -- to sort compostables separately from their trash.

The Local Leaders took it upon themselves to go out and educate community members about the new policy, giving a presentation at a Pleasanton school board meeting and at an informational meeting for businesses that was hosted by the city.

With a significantly larger club this school year -- 124 members, up from 50 last year -- students continue interacting with school district administrators to push for full compliance with the ordinance.

"That's an ongoing focus because the kids are really interested in their campus and recycling and separating organics," Buck said.

As club adviser, Buck is on the Amador campus every Wednesday working with the Local Leaders. Besides providing the curriculum, she also arranges guest speakers and field trips to places like the Diablo Canyon Power Plant and the Vasco Road Landfill.

"I love to be around the kids when they're starting to understand their impact on the environment," Buck said. "I took 15 high school students on a tour of the Zone 7 facilities ... They were asking really great questions and were really excited about what they were seeing. I never get tired of the thrill of being around that process."

Recently Buck has been spending evenings and weekends doing homework of her own -- she's finishing a master's degree in education with a specialty in online teaching and learning.

Buck will put her degree to use immediately next year to launch the Go Green Initiative Academy, a free online program that will offer classes for all different age groups and for certain school officials, such as custodians and principals.

"A lot of training I do for schools across the country and world happens in some electronic fashion or face-to-face, but we could be much more efficient and reach more people if we were to create the Khan Academy of environmental education," she said.

Buck added she believes the new program will "create community between our students."

"They might live in Malaysia or Maine and anywhere in between, but they'll be taking courses together and collaborating online and sharing ideas worldwide," she said. "It's going to be pretty revolutionary."

* She moved to Pleasanton in 1999 with her husband, Mark. They have three children who attended Walnut Grove, Harvest Park and Amador Valley -- Katie, 25, Andy, 20 and Mandy, 18.

* Buck has been a speaker at conferences and conventions worldwide, including the Global Green Business Summit in China.

* While stationed at the U.S. Navy's Fleet Training Center in San Diego, she served as the legal, physical security, admin and command inspection officer, as well as a damage control instructor.

Repairing a Disagreement with your Beloved & “Physical” vs. “Social” Distancing
By Chandrama Anderson | 2 comments | 2,578 views