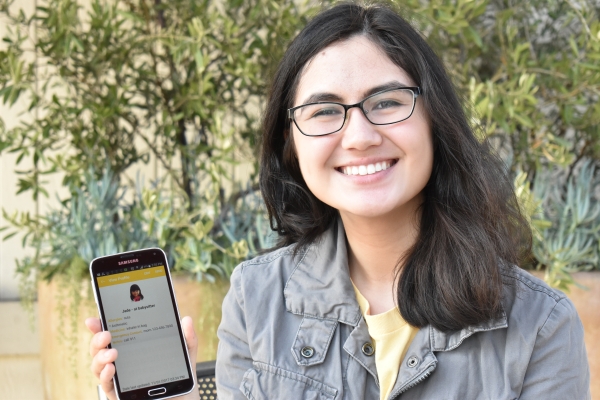 Danville teen Jasmine Steele spent six months developing "Allergy Blast," an app which allows users to save allergies, medications and emergency contacts and quickly send the info to people who might need to know. (Photo by Erika Alvero) 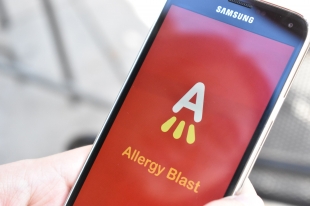 When Jasmine Steele was 2 years old, she bit into her first -- and last -- peanut butter sandwich.

Her last, because right after she took a bite, her lips swelled up and she struggled to swallow. She was rushed to the hospital, where it was determined that a nut allergy had caused her to experience anaphylaxis, a severe allergic reaction. After that, her parents cleared out all nuts from their Danville home -- except for almonds, the only nut Steele can eat.

Steele, now 17 and a senior at San Ramon Valley High, has never returned to the emergency room for anaphylaxis.

"My parents have been very good about it," she said. "But I know how important that is because there are a lot of people in my family with nut allergies ... and they've had many more emergencies."

All these close-to-home experiences served as the inspiration for Steele's "Allergy Blast" app, for which she won last year's Congressional App Challenge for California's 11th District.

Growing up, averting accidental allergen-exposure emergencies required careful focus on her parents' part. Her mom Julie had multiple versions of a document that she would give to people for overnight stays, field trips and play dates.

"She basically had a Word document that had a photo of me, my name, all this information about my allergies, a bunch of emergency contacts, details about what my medication was, what the dosage was and where it could be found, in my backpack, in the nurse's office," Steele said. "Her number and even a doctor's number, and other (contacts for) emergencies. It was very thorough."

From kindergarten through eighth grade, Steele attended St. Isidore's, a Catholic school in Danville that is entirely peanut-free.

On a less life-threatening front, another constant throughout Steele's life has been computers. Her dad works at Adobe Systems, and she has "always had that presence," she said.

But she was truly reeled into the coding world by Scratch, a coding tool and community geared toward beginners. It quickly became her favorite hobby, and she spent a lot of time for the next few years collaborating on projects within the online community.

After that, she started learning non-block-based programming languages like Python.

In high school, she decided she wanted to create her own app, one that would solve a problem that personally affected her.

"And that was the allergy problem," Steele said.

After some brainstorming, in fall 2015 she began building Allergy Blast through a program called App Inventor. Allergy Blast is, in a sense, based off her mother's own documentation system: It allows users to save any information regarding allergies, medications and emergency contacts, and then, with the press of a button, send an email or text to someone who might need to know.

Users can also mark if they, or their children, have asthma. This feature is personal to Steele too -- she and her 15-year-old sister Jade are asthmatic.

The app took her about six months to build over the course of her sophomore year, though, she said, her work was somewhat intermittent as she had to balance it with school. In May 2016, Allergy Blast made its way to app stores.

Steele found out about the Congressional App Challenge during a coding summer immersion program at Pixar between her sophomore and junior years. The challenge, initiated in 2013, allows high school students in participating districts nationwide to submit apps they created, with winning apps displayed in the U.S. Capitol and featured on the House of Representatives website.

She submitted Allergy Blast last November, and a month later, found out that she had won the challenge for local Congressman Mark DeSaulnier's district.

"I was shocked because I didn't really expect to win ... I was overjoyed because that meant I got to go to D.C. and present it to a congressman," Steele said.

She presented her app at a science fair-like convention in Washington D.C. last April, alongside other winners from around the country.

In the future, Steele hopes to continue working with computers.

"Being at Pixar was really cool for me, because that would be a dream career for me," she said. "Being able to create these cool worlds and stories and characters that are all just 1s and 0s, but there's so much more at the same time."

* Jasmine Steele has lived in Danville her entire life.

* Steele made the "Allergy Blast" app for Android phones, but her mom, who wanted to learn coding, adapted it to create an IOS version.

* So far, 50-100 people have downloaded the Android version and downloads for the IOS version are in the quadruple digits, Steele said.

* Steele got her own booth at the San Ramon Valley Emergency Preparedness Fair last year.

* She finished submitting all her college apps last week.

* The Tri-Valley Heroes award ceremony last month was the first event outside the house that Steele's grandfather was able to attend after his heart nearly gave out last holiday season. "My grandpa is really one of my role models and my hero," Steele said. "He's always impressed on the family, 'be kind and be good people above all.'"

The Impact of COVID-19 on Our High School Juniors and Seniors
By Elizabeth LaScala | 0 comments | 2,304 views

The first few seconds after awakening; before I remember the virus
By Chandrama Anderson | 0 comments | 1,288 views

Stay up to date on local coronavirus coverage with our daily news digest email.