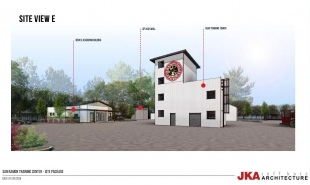 Located at the southeast corner of Bollinger Canyon and Crow Canyon roads, the training facility is composed of a classroom building, storage facility, training tower and other structures and props for training purposes. (Image courtesy the city of San Ramon)