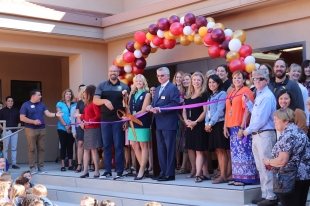 Members of the San Ramon Valley Christian Academy community celebrated the completion of the school's renovations on Friday, with a special ribbon cutting ceremony in the school's courtyard. (Photo by Ryan J. Degan)

Congratulations to SRVCA for its remarkable history of success and growth. It has been blessed beyond expectations and is an amazing asset to our community. It s worthy of the support of the whole community. My 4th grader son couldn't wait to be there on the day it opened, and was in the first graduating class. At that time, we were just hoping day by day for it to survive. Wow, and thanks to God's grace.