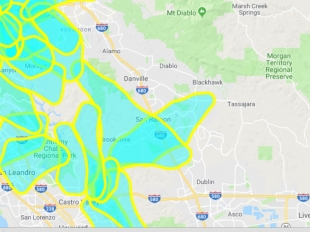 A screenshots from PG&E's outage map showing parts of the Tri-Valley that could be affected by public safety power shutoffs this week.

Between the highly litigious nature of California, free needle programs, sanctuary cities, homelessness, infrastructure problems, and now power outages, we are all getting a chance to live like folks in many third world countries. Of course, one big difference is the taxes we pay. Regardless of where one sits on the political spectrum, I hope voters will start voting for change instead of continuing to vote in the same candidates along a certain political party. What more will it take for people to wake up??

The blame game is a real crusher. Find the perp, punish him till he breaks, then howl when it's discovered that he's crippled and can't leap to the demands of his masters.

It's a power outage, not a natural disaster. Keep it in perspective.

Report Objectionable Content
Email Town Square Moderator
7 people like this
Posted by San Ramon Neighbor
a resident of San Ramon
on Oct 10, 2019 at 6:36 am

PSPS is the acronym for “Public Safety Power Shutoff”.
New Ca law (enacted by PUC and signed by Gov Newsome) REQUIRES utilities (ALL, not just PG&E) to de-energize areas that face severe wind threat/ fire risk.
This has the Doppler effect of potentially impacting huge swaths of the State if that threat impacts a “Transmission” (500/230KV) Tower corridor(s).
When that level of shut off is enacted, you don’t just flip a switch back on. The law requires PG&E to physically/visually inspect every single piece of equipment (down voltage) of the shut down BEFORE it can be re-energized. This means every tower, line, transformer, pad apparatus, substation, pole, reclosure, etc.
This is why a 2 day event can potentially keep areas dark for several days after the threat has passed. It is a MASSIVE man hrs. labor intensive process on 24/7 overtime staffing.
PG&E loses HUGE $$ when this is enacted as thousands of meters are not spinning and the labor cost to comply is huge. They don’t want to do these. They are legally mandated to now. This is the arrangement that was brokered through the PUC to balance the conflicting liability/service reliability laws. It is all driven because of California’s “Inverse Condemnation” liability conflict with PUC’s previous fining of PG&E based on outage reliability.

Prior to this law, power shut off or outage = fine on PG&E. Leave it on, and have ANY% role in a fire= 100% liability on PG&E.
If a limb 1/4 mile away blew into a transmission line and brought down hot conductor starting a fire?
PG&E liable. No such thing as “Act of God” factored.
No other State in the Nation has these asinine conflicts of law.

So, to make this real. This is analogous to you knowing your daughter MAY have a bad hair dryer. Until she leaves, you shut your house main off. Now, by law, before you can flip the main switch back on, you must hire an electrician to inspect (and document) every breaker below your main, every wire in your attic, every wall switch, every outlet, etc. Then, you must one by one phase in all your breakers so you don’t shock load the system, then you have to go back and program all your digital electronics.

Multiply this by 50K square miles.

Report Objectionable Content
Email Town Square Moderator
4 people like this
Posted by Median Joe
a resident of San Ramon
on Oct 10, 2019 at 7:03 am

Median Joe is a registered user.


Have Ice Cream thawing in your freezer?
Have Spoon, Will Travel.

Report Objectionable Content
Email Town Square Moderator
4 people like this
Posted by Long Term Resident
a resident of Danville
on Oct 10, 2019 at 8:33 am

As long as power is restored before representatives return from Washington DC for the weekend, all is well!! This is all part of the Green New Deal. WE are all saving power and reducing greenhouse gases!!

Report Objectionable Content
Email Town Square Moderator
9 people like this
Posted by Resident
a resident of San Ramon
on Oct 10, 2019 at 2:42 pm

CA is run by a one party liberal dictatorship. This is what you get. Keep voting the same way & this will continue.

Dear Resident,
Relax with the hyperbole. If CA is too liberal, I’m sure you can find a better suited state to live in. That’s the beauty of the USA, you’re not stuck here in CA. And saying that San Ramon is like leaving in a third world country is pure fallacy. Go live in almost any country in Africa and you’ll know what it’s like to not have running water ever, no food, no sanitation systems ever. No NON-corrupt police force and no real legal system to address grievances. I’m sure you haven’t experienced that in San Ramon. And if you have, you’re doing it wrong, lol.