Plus: City to review updated plan for residential care facility for seniors 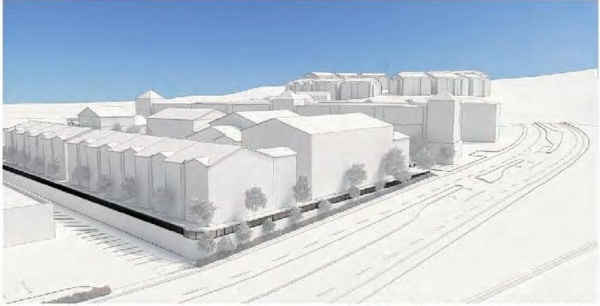 The proposed project consists of a 56-unit multi-family residential complex spread out among seven buildings. (Image courtesy the city of San Ramon) 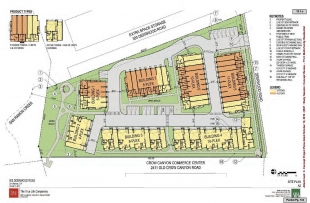 Proposed units would be approximately 1,300 to 2,000 square feet and each possess a private two car garage. (Image courtesy the city of San Ramon)

The San Ramon Planning Commission is set to discuss Tuesday a landowner's proposal to turn a paved lot into a 56-unit multi-family residential complex, a project that would include building seven buildings of varying sizes.

Set for an informational discussion with no final decision scheduled to be made, the project would be located at 500 Deerwood Road -- a paved lot that is utilized as an outdoor storage facility for various contractors -- in an area city staff say is within the Crow Canyon Specific Plan and currently zoned for commercial services/offices and residential overlay.

The 2.47-acre lot is located in between the Crow Canyon Commerce Center (which contains the Diablo Gymnastics School and CrossFit San Ramon among other businesses) and a storage facility, with an office complex located on the lot’s southern side.

According to associate planner Shinei Tsukamoto, proposed units would be approximately 1,300 to 2,000 square feet and each possess a private two-car garage.

The Planning Commission is set to meet for its regular meeting on Tuesday, 7 p.m. in the San Ramon City Hall Council Chambers, 7000 Bollinger Canyon Road.

* Later, commissioners are also set to review an updated plan to develop a residential care facility for seniors consisting of up to 48 rooms with 84 beds on a 0.7-acre property located at 19251 San Ramon Valley Blvd.

Also an informative meeting with no official final decision set to be made, the project would include relocating a vacant single-family home -- known as the “El Nido” house -- to the eastern edge of the property line and renovating it for use as a part of the care facility.

El Nido is known as one of the oldest homes in the San Ramon Valley, according to city staff, who say that it is associated with one of the region’s pioneer families.

According to senior planner Cindy Yee, the home was built by the Harlan family roughly between 1856 and 1858, who lived on the property and operated a ranch and horticultural business along San Ramon Valley Boulevard.

The proposed project would convert the first floor of the house into a dining and kitchen area for the care facility while the second floor would be used as the facility’s administrative office.

* The commission will also hold a public hearing on proposed changes to the city’s zoning ordinance, and is seeking public input on how these changes may affect the community.

Changes and reviews being made to the ordinance mostly relate to making minor edits and clarifications to language usage, in addition to adding new definitions for short-term rentals, studios and specialized education.

ddmom is a registered user.


56 units on 2.47 acres? Wow, those will be really crammed together. More kids flowing into the already crowded schools.

Too many rats in a cage. Maybe make most of the units section 8 too, then watch the crime rate.

Repairing a Disagreement with your Beloved & “Physical” vs. “Social” Distancing
By Chandrama Anderson | 2 comments | 2,590 views

Visual Games During Shelter-in-Place
By John A. Barry and Bill Carmel | 1 comment | 233 views