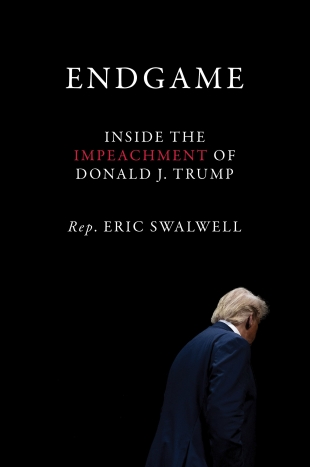 A newly announced book by U.S. Rep. Eric Swalwell (D-Livermore) that began as a tribute to his father partly "morphed" into an insider's look at the recent impeachment proceedings of President Donald Trump.

"Endgame: Inside the Impeachment of Donald J. Trump", which is slated for an April 7 release from Abrams Press, might seem like it suddenly came from nowhere, but the one-time presidential candidate said the publication was in development for at least a couple of years.

"Two years ago it started essentially as a tribute to my dad, who was a police officer, and he stood up against a corrupt mayor and lost his job because of it," Swalwell told the Weekly, adding that he also wanted to write about his past life as a prosecutor and "then it just morphed into an inside look at impeachment as that took shape."

Swalwell, a fourth-term congressman from the Tri-Valley, had a front row seat into the impeachment inquiry and hearing of Trump as a member of the House Judiciary Committee.

The U.S. House of Representatives ultimately impeached Trump in December in largely party-line votes on two articles, abuse of power and obstruction of Congress, stemming from allegations of the president pressuring Ukrainian officials to investigate presidential candidate Joe Biden and his son ahead of the election.

The U.S. Senate acquitted Trump on both counts earlier this month after its impeachment trial also largely party-line votes.

The new book is not just Swalwell's own account of Trump's impeachment, he said, but also "a tribute to the public servants, the ambassadors, the military persons like (Lt. Col. Alexander Vindman) who stood up and did the right thing when we as a nation have been wondering if there's any proof of honor inside the administration."

"I thought I had an interesting vantage point as a former prosecutor on two of the key committees that worked on impeachment -- judiciary and intelligence -- but also sitting at the leadership table as a member of Speaker Pelosi's leadership team," he said. "I saw a lot of decision points along the way and how we grappled with a president who tested us every day, and the duty we had to hold him accountable."

Swalwell was an intern on Capitol Hill when the terrorist attacks of Sept. 11, 2001 happened, and later took a class on the 9/11 Commission -- decisions that he "made early in my life without really appreciating what they would mean later" in his career.

"My instinct after the Russia interference campaign in 2016 was to create a bipartisan commission on what Russia had done so that we could protect against future elections," Swalwell said. "I was completely informed by the good work I saw after Sept. 11 -- the difference was we didn't have the courage and character that we had on Capitol Hill after Sept. 11. Instead I saw people that wanted to protect the president and protect their jobs, and the book talks about those parallel times."

As for the book's title, Swalwell said it comes from the chess term "endgame", meaning the stage of the game when there are few pieces left on the board. Swalwell had hoped for Trump's removal from office but said "it's probably going to have to be settled which endgame it is in November."

"I think we have two potential endgames -- one is that Trumpism, corruption prevail and we move from a democracy into an autocracy, or democracy is reaffirmed and we as a country learn from what the president's corruption has exposed, and we come out stronger because of it," added Swalwell, who also is bidding for re-election this year. He has six challengers in the 15th Congressional District ballot for next Tuesday's primary election.

A book written by a low-IQ Leftist congressman about a sham impeachment. FACTS MATTER and Little Eric will provide none. It'll be for sale online for $0.99 within 3 months, just like Hillary's tome.

Mr Swalwell, your own actions, and not whatever your father or others did, are all that count. And your own actions were more than disappointing. You followed the party line of Pelosi, Schiff, Nadler and others who put Party before Nation. You have done more damage than the Russians or any other enemies could ever have done. And it is so predictable that you are now pushing a book. Shame on you.

I completely agree with the above comments. Why does Swalwell get so much air time on tv? He is a giant bore

Swalwell should write a book about his own corruption. He accepted and kept illegally laundered campaign contributions and then gave a federal job in exchange for those contributions. Here is a link to the news story. Web Link

Report Objectionable Content
Email Town Square Moderator
15 people like this
Posted by Long Term Resident
a resident of Danville
on Feb 26, 2020 at 7:58 pm

There is no mention if the book is fiction or non-fiction ! I think we all know ! It should be used as evidence that this guy has Delusional Disorder.

It’s hard to believe this guy gets elected. What does that say about the district he represents??

Report Objectionable Content
Email Town Square Moderator
2 people like this
Posted by O. K. Boomer
a resident of Danville
on Feb 27, 2020 at 9:50 am

Swalwell has never even been elected with a 3/4 majority! The closest he's come is 73%. He should be removed and replaced with the next highest vote getter.

Report Objectionable Content
Email Town Square Moderator
12 people like this
Posted by D
a resident of Danville
on Feb 27, 2020 at 7:36 pm

He is already on his second marriage, he still owes thousands in student loans, and he is going to lecture us on issues of morality, living within your budget, and everything else. Can the Democrats please find someone, anyone, beside this loser, to run for his seat?

Report Objectionable Content
Email Town Square Moderator
6 people like this
Posted by Malcolm Hex
a resident of San Ramon
on Feb 29, 2020 at 7:55 am

So, the liar - Swalwell - is writing a book. My, my, my... Will this be the book where he finally tells us about the evidence he has that Trump is a Russian asset? I think Swalwell should title his book: Clown Theory How to Lie and Stay Stupid.


Report Objectionable Content
Email Town Square Moderator
8 people like this
Posted by Resident
a resident of San Ramon
on Feb 29, 2020 at 1:35 pm

Swillwell's record as a prosecutor in Alameda County ought to be examined to find out if innocent people were also frivolously & falsely prosecuted. Faith in government is being greatly negatively impacted.

Repairing a Disagreement with your Beloved & “Physical” vs. “Social” Distancing
By Chandrama Anderson | 2 comments | 2,588 views