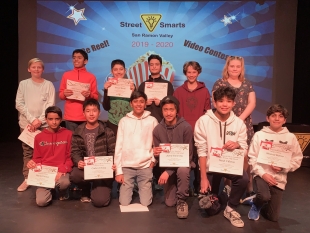 Sinning teams of the Street Smarts “Be Reel!” Video Contest Awards were celebrated during a special ceremony at the Village Theatre in Danville on Jan. 24. (Photo courtesy Street Smarts)

The efforts of 45 aspiring filmmakers from San Ramon Valley middle and high schools to make the streets safer for pedestrians was showcased in Danville last month, when hundreds of residents gathered for the annual Street Smarts “Be Reel!” Video Contest Awards Ceremony.

This year 95 students submitted 30 videos to the contest, with teams of students working together to create 60-second public service announcement (PSA) videos based off of the theme “Stay Alert and Don’t Get Hurt!”

“The “Be Reel!” Video Contest is just one of the many programs offered by San Ramon Valley Street Smarts, which is a traffic safety education program serving the San Ramon Valley,” program officials said in a statement.

“Each year, the program holds contests, presentations and hands-on activities at elementary schools, middle schools, and high schools in the San Ramon Valley. The program’s goal is to educate drivers, bicyclists, and pedestrians on issues related to traffic safety through outreach programs," they added.

As a part of the awards, more than 220 parents, students, school staff and elected officials gathered in the Village Theatre and Art Gallery turned on Jan. 24, to view the top 15 finalist videos and applaud the winning filmmakers in individual categories.

“Distraction Free is the Way to Be” -- produced and directed by Jared Fontecha from Dougherty Valley High School.

San Ramon Mayor Bill Clarkson and Danville Vice Mayor Lisa Blackwell emceed the event, and were joined by a collection of other elected officials including Candace Andersen, chair of the Contra Costa County Board of Supervisors; Greg Marvel, president of the San Ramon Valley Unified School District Board of Education; and Debbie Vanek, fire and safety inspector for the San Ramon Valley Fire Protection District.

Street Smarts is funded in part by a federal Safe Routes to School grant, and is a collaborative program with support from the city of San Ramon, town of Danville, San Ramon Valley Unified School District, County of Contra Costa and San Ramon Valley Fire Protection District.

For residents interested in learning more about how to make the San Ramon Valley streets safer for the community, the Street Smarts Community Bike Festival will be held May 9, on the Iron Horse Middle School blacktop in San Ramon from 10 a.m. to 2 p.m. Residents can sign up for the free event online.

Residents can learn more about Street Smarts and view all of the winning videos online at www.street-smarts.com.

Repairing a Disagreement with your Beloved & “Physical” vs. “Social” Distancing
By Chandrama Anderson | 2 comments | 2,576 views