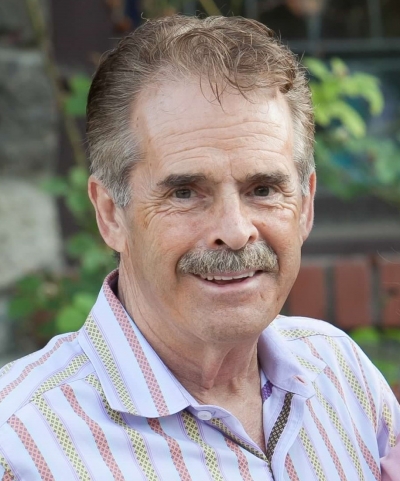 Heaven didn’t know what they were getting Wednesday, April 14, 2021 when Bill Selway walked through the Pearly gates. We imagine he got teary-eyed when he found his mother Margaret, father Roy Selway and brother-in law Eric and his friends. He probably had them laughing in seconds and organized a party. But Kathryn Steinberg, his mother-in-law, would be wary of Bill’s tricks. Bill was a prankster. He hooked mannequin hands on the back belt of wife Kate’s coat during mall shopping, set all the alarm clocks in Macy’s electronics to go off at different times and his scary Thor mask popped up at kitchen windows or in the dark on the way to the Mohr Mansion.

The mischief started at a young age. Billy was born in Dillon, Montana on December 8, 1946. When he was four, the family moved to Richmond, California and Billy welcomed six brothers Pat, Jimmy, Chuck, Danny, Dell, Joe and sister Helen. As big brother he could change a diaper quicker than his mother. The Selway boys and their ”Spanky and the Little Rascals gang” from St. Paul’s Elementary wreaked havoc in the neighborhood; they left poop bags on doorsteps, launched Billy out of a soap box car resulting in his iconic chipped tooth and started guerilla warfare with Old Lady Arnold. Her cactuses could not compete with the underground tunnel system dug to retrieve the balls that went into her yard. Billy also looked out for his siblings creating experiences for them at Stinson Beach, Russian River and Lake Tahoe.

While Bill vomited on his first girlfriend on the Ferris wheel, Bill’s high school sweetheart, Kathryn “Kate” Steinberg was luckier. Kate’s brother Eric introduced her to the BMOC (Big Man on Campus). It was later related in their son’s 5th grade story “How my Parents Met: there was a macho guy and a wimp. My Dad (Bill) was the wimp.” Macho didn’t matter. As Mimi (Kate’s sister) said, Bill brought laughter and light into the Steinberg household. He sent a beautiful Thanksgiving turkey flying across the room (slight carving accident) and instructed 5-year-old Helen to interrupt Mrs. Steinberg and the door-to-door salesman asking, “Mister did you fart?” Mrs. S laughed so hard she “had a little accident." Despite this, Helen thought Bill and Kate were the iconic couple, Annette Funicello and Frankie Avalon.

Not sure Frankie could spit sunflower seeds and play basketball like Bill. The year was 1961. Number 4, point guard Bill Selway, Salesian’s Team Captain at 5 feet 7 inches, had the ball. In one fell swoop, Bill made his trademark fade-a-way jump shot from half court. The ball sailed over the rafters of the Alameda County Fairgrounds Exhibition Hall and swished into the net sending the opposing team, Amador Valley, out of their seats cheering for Bill. He continued to play basketball at Cal State Hayward and in adult leagues in Richmond, San Ramon, and Pleasanton well into his 60s, coached his brothers, son and granddaughters and taught many others the key to the swish shot: “drop your wrist!”

Due to his father’s untimely death at age 51, along with their Mom, Bill and his brother Pat took over their father’s Machine Tool Business. At age 21, Bill's quick wit and hard work ethic could only get him so far. So, he grew a mustache. For more on Bill, his mustache and his life at Selway Machine Tool Company, see the honorarium: https://selwaytool-5182944.hs-sites.com/blog/williamselway.

Bill and Kate welcomed four daughters into their world: Kasey, Jamie, Marni & Meghan. But after a life with six brothers, Bill kept trying for a boy and Zack finished off their family. Having Bill as a father was never dull. He turned his children’s tears to smiles and laughter with stinky, smelly socks to ward off the boogie man. He taught them the important things in life: the hand-off the football and to take-it-down-the-field-under-your-shirt play and how to correctly toilet paper neighbor’s yards. He instilled in them a sense of adventure body surfing in Santa Cruz, using the tractor to waterski in the swimming pool and rock jumping at Lake Tahoe. He cried tears of joy at their accomplishments. He was our very own “Sappy Pappy.”

Bill loved taking his family on trips. He may have left the plane tickets for Hawaii at home, lost half his kids in Grand Central Station, dumped the sewage from the RV on the family campsite and ended up with two of his kids in front of a closed Disneyland entrance gate (aka Clark Griswold), but any vacations with Bill were legendary. To the last, Bill collected stories as the Summer 2020 coastal trip with four R.V.s and a camper van resulted in an emergency call to the mobile RV septic repair (note: flushing often is good).

Bill watched his children become adults and marry. While he made his son-in-law, Pat Hayes, meet him at Dean’s Café at 5 a.m. to have the “talk,” daughter-in-law, Andrea Selway, got off a little easier. He was overjoyed with his six grandchildren – Cassidy and Harrison Kepp, MykelPatrick Hayes, and Jade, Dori, and Blake Selway. He taught them to laugh and be kind, cheered them on in theater performances, soccer games, swim meets, and created traditions with Papa making root beer floats, playing Hide-and -Go-Seek and watching movies together curled up on the couch. As his t-shirt read, he was, “Papa. The Man, The Myth and the Legend."

While Bill was larger-than-life, he never wanted much. When asked for gift ideas for his birthday or Christmas, he said, “to be to church on time.” Sorry, Dad. We think he made up for it with God. He went to church several times a week, ran the Pleasanton Catholic Youth Organization sports program, was instrumental in the fundraising for St. Elizabeth Seton and worked tirelessly to establish a Catholic high school in the Tri-Valley area. He joined neighbors in San Ramon to work for the Twin Creeks Homeowners Association, built the snack bar and restrooms at Amador Valley High (Bill’s “Crap and Snack”), headed Amador Boosters for years, and donated to the Bay Area Animal Rescue Foundation and Salesian High School, his alma mater.

Bill was a man of few words unless he was telling a joke or relaying the humor of real-life experiences. He answered texts and emails with one word: yes, no, or thanks. He wrote “Roses are red poems” for Kate on every occasion and dominated family pun battles. What he offered in those few words was irreplaceable. Bill was a mentor for many – his kids and grandchildren, their friends, his friends, nephews and nieces and business associates. One friend said, “He was the dad of my heart." Many said he was the parent they wanted to be for their children. Maybe that’s because he pulled one of his daughter’s friends’ vans out of a ditch at 1 am with a tractor so she wouldn’t get in trouble and provided emotional and financial guidance when a family friend lost her husband. Bill’s generosity showed no bounds.

When he wasn’t working, Bill was working pulling weeds, washing the cars and MacGyver-ing everything with the toothpick tucked behind his ear. He created experiences for friends and families to gather and celebrate life. He chartered a bus to the Rolling Stones concert, lit up fireworks and maybe some burgers at the annual Selway 4th of July celebrations and hosted New Year’s Eve parties for over twenty years. That’s why the celebration of life for Bill Selway will have to wait. He would want a party and a party he will have when Covid-19 restrictions allow. Expect the traditional Bill and Kathy rhyming invite later.

We see Bill in Heaven with loved ones, burning rubber in his original ’56 Chevy, “Oh What a Night” blaring, laughing, and doing SOB turns (Slide Over Baby) while dropping down little pranks and raindrops of wisdom. To honor his memory, give your family and friends a Bill Selway hug, blast some music, and tell a joke.

Photo Gallery
0 photos Upload a photo
Remembrances
0 entries Submit a remembrance
Make a donation
https://www.salesian.com/support-salesian/donate
About this site     Contact us