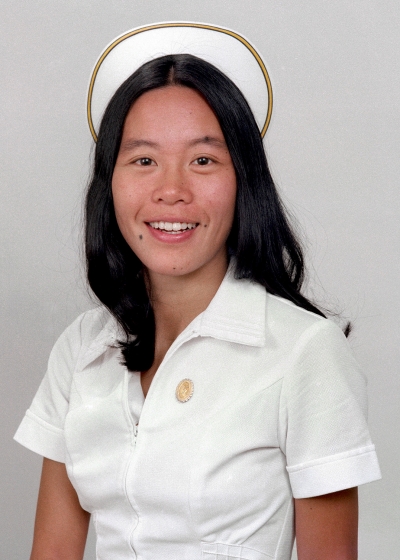 Charisse (Cher) passed away peacefully at home on the morning of August 2 and returned to God, escaping the ravages of her long illness.

Cher is best known for the care and comfort she gave to her patients, and the love and cheer she brought to her large family.

She was born on January 18, 1954 in San Francisco and graduated from UC Berkeley in 1976. She went on to earn a Bachelor’s in Nursing from Cal State Bakersfield. In fact, Cher met her husband while she was attending school with his sister. BJ and a friend were returning from vacation in the canyons of Southern Utah, and could return through Bakersfield. The Nursing Class was throwing a party to celebrate April 1. His friend did not want to stop because “there is nothing good in Bakersfield.” Instead, BJ took his sister’s guidance that “there will be 30 nursing students at this party who don’t like cowboys.”

Less than a year later, his friend married the woman he met that night. Within an hour of meeting her, BJ knew he would someday ask Cher to marry. For 37 years, Cher and BJ referred to that day as “The Day of the Fools.”

Cher continued her education at UC San Francisco, earning a Master’s Degree in Oncology Nursing. Her career as a Nurse Specialist took her from San Jose Medical Center to Good Samaritan, then Kaiser, and finally Valley Medical Oncology.

Cher was born in San Francisco to her father Jim and mother Frances, who together earned nine “Croix de Candlestick” pins that Jim proudly displayed on his Giants cap. Cher watched every single Giants game these last few years.

In 1992 Cher gave birth to Connor James, and was pleased to have a son. Connor grew up to play soccer, baseball, basketball, and volleyball. Cher became the definition of a Team Mom, always positive and never missing a game. One season, she wrote the game summaries for our local paper. Describing a baseball game where our team hit very well, Cher wrote a transposition like only she could: “The boys were really talking to their bats.”

Last August, Cher was both pleased and proud to travel to Pomona for her son’s White Coat Ceremony at Western University, where he started medical school.

Photo Gallery
0 photos Upload a photo
Remembrances
1 entry Submit a remembrance
From Katrinka Ruk
Aug. 9, 2017
so sad to hear the passing of Cher-Bear. my heart hurts. Although we haven't seen each other since college, fondest of memories going to Fentons, playing basketball (that little thing could jump!), going to frat parties, sunning on the roof of Gamma...
Read more
Memorial service
A memorial service will be held.
Make a donation
She is missed.
About this site     Contact us