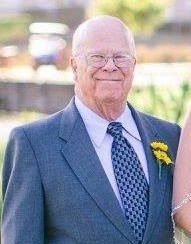 Cyrus Finley passed away suddenly on Dec 28, 2015, surrounded by family. He was a long-time Pleasanton resident until his retirement in 2005, when he moved to Arnold, CA. He was active in the Air Force for 15 years, finishing as a Captain in Air Defense Command. He went on to work as an Air Traffic Controller for 11 years and retired from Safeway as a Computer Administrator. He was active in volunteering in his daughters' activities, serving as President of the Drum and Baton Corps and also the Foothill High School Band Boosters.

When he retired, he continued his volunteering with the Friends of the Library in Arnold, and was also an active member of the Lion's Club. Cy was a devout Catholic, a member of the Catholic Community of Pleasanton and the Our Lady of the Sierra in Arnold. He was an avid Notre Dame football fan, never missing a game.

Cy is survived by his wife of 55 years, Mary; two daughters, Dawn Abbey and Cindy Dourov; 2 sons-in-law, Terry Abbey and Alex Dourov; six grandchildren and their spouses, Zachary and Heather Abbey, Tiffany Abbey, Caitlin & Will Dyer, Andrew Abbey, Christopher Dourov and Matthew Abbey. He is preceded in death by his daughter, Barbara, sister Joanne and parents.

Memorial service
A memorial service will be held at 11 a.m. on Saturday, Jan. 23 at the Our Lady of the Sierra Church, 1301 Linebaugh Road, Arnold.
Make a donation
In lieu of flowers, please consider a donation either the American Heart Association or American Cancer Association.
About this site     Contact us